N.C. Average Teacher Pay $54,392 per Year, Second Best in Southeast | Beaufort County Now | Public school teachers in North Carolina receive an average annual salary of $53,392 for the current school year, according to the latest figures from the N.C. Department of Public Instruction.

Published: Tuesday, April 13th, 2021 @ 8:26 am
By: Carolina Journal   ( More Entries )
Publisher's Note: This post appears here courtesy of the Carolina Journal. The author of this post is David N. Bass. 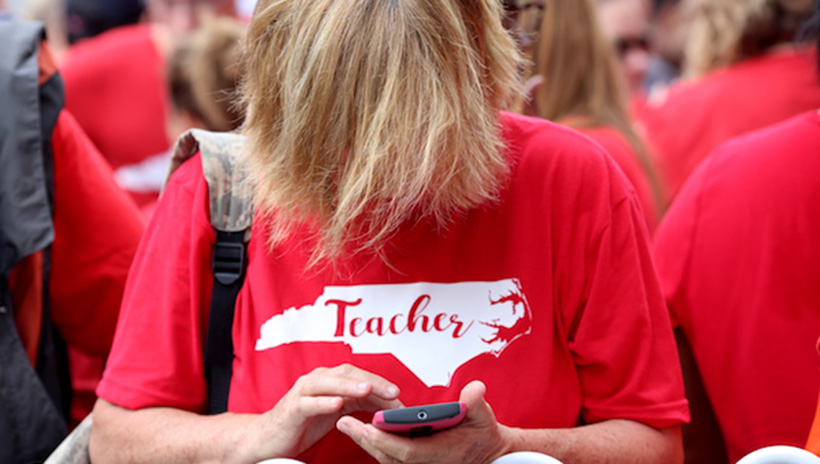 A participant in the May 2018 March for Students and Rally for Respect in downtown Raleigh. | Photo: Don Carrington / Carolina Journal

Public school teachers in North Carolina receive an average annual salary of $53,392 for the current school year, according to the latest figures from the N.C. Department of Public Instruction. That puts the state second best in the Southeast — behind Georgia — in average teacher pay.

Teacher salaries swiftly increased between 2014 and 2019 — rising from $44,900 per year to the current $53,940 — before stalling out the past two years, noted Dr. Terry Stoops, director of the Center for Effective Education at the John Locke Foundation. That was due to the Republican-controlled General Assembly and Democratic Gov. Roy Cooper remaining at loggerheads over the amount of any future increases.

In 2019, lawmakers passed a bill to increase teacher pay by 3.9%, but Cooper vetoed it under the rationale the amount continued to "shortchange" teachers. Republicans offered a compromise 4.9% raise plus a $1,000 bonus if Senate Democrats agreed to override Cooper's veto, but that effort fell short in a party-line vote.

That conflict is on the cusp of emerging once again this year. Cooper's proposed budget for the new biennium includes an average 10% pay raises for teachers and principals, including one-time bonuses of $2,000.

Lawmakers will hammer out their own budget in the coming weeks, but some Republicans have already floated teacher-pay increases through introduced legislation. Companion bills in the House and Senate, for example, would boost pay by $3,000 a year for veteran teachers serving in years 15 through 24 of their careers.

"Republicans in the General Assembly have done an admirable job of ensuring that starting salaries are competitive with other states in the region," he said. "Now, I think, lawmakers must begin crafting a compensation system designed to retain our very best mid- and late-career educators and those in teacher shortage areas.

"The sooner that lawmakers abandon the practice of awarding across-the-board raises and bonuses, the better," Stoops added.
Go Back