ECU Splits Final Two Games With Houston | Eastern North Carolina Now | The Pirates (11-24, 2-10 AAC) dropped three of four to the Cougars (13-27, 4-12 AAC) and will play their final non-league contest of the season April 21 at UNC Greensboro. 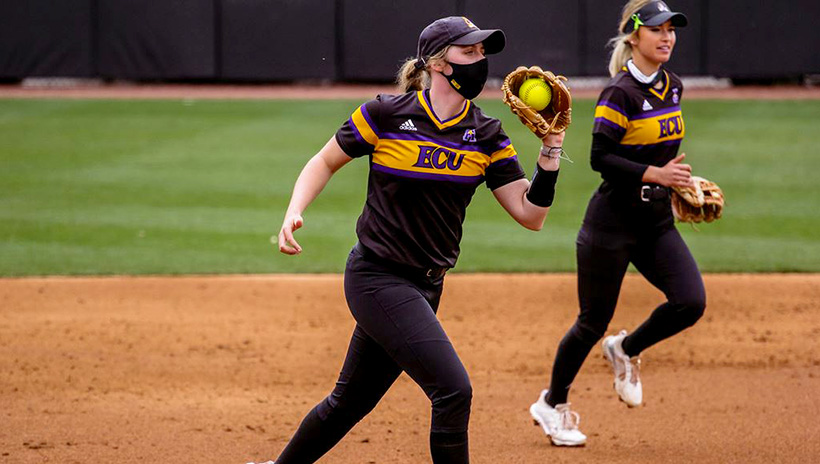 HOUSTON, TX     After East Carolina rallied for an 11-5 victory Sunday in a suspended game from Saturday, Houston answered with a 6-1 win in the teams' American Athletic Conference series at the Cougar Softball Stadium.

Game Three Conclusion: East Carolina 11, Houston 5     A grand slam off the bat of Rachel McCollum flipped the script in the conclusion of game three of the series as ECU rallied to claim its second American Athletic Conference victory of the season. The Pirates drew a season-high 10 walks to help spur themselves to the win.

McCollum put together a monster effort at the plate, going 3-for-5 with two runs scored and five RBI. Sydney Yoder also chipped in by driving in a pair of runs. Britaney Shaw collected three hits to pace Houston.

Kama Woodall (6-12) earned the win in the circle, throwing the final 6.1 innings and allowing just two runs on 10 hits with three walks and four strikeouts. Logan Hulon (2-5) was tagged with the loss as she surrendered six runs (three earned) on three hits with six walks and three strikeouts.

Houston struck first in the bottom of the first. Stewart singled to lead off the game and scored on a Queen RBI single after moving to second on a sacrifice bunt. Then, with two outs, Aspen Howie made it 3-0 with a two-run single.

The Pirates dented the scoreboard in the top of the third. Narron drew a leadoff walk before Inae reached on a fielder's choice and moved to second on a passed ball. McCollum followed with an RBI double to cut the Cougar lead to 3-1. Rain overtook the field in the top of the fourth, forcing the contest to be suspended until Sunday.

When the teams picked the game back up Sunday afternoon, Taylor Woodring drew a walk to load the bases with no outs. ECU did not waste the opportunity, scoring two runs on a pair of Cougar errors to knot the score at three. McCollum then stepped up and launched a 3-2 pitch over the wall in center for a grand slam that boosted the Pirates in front by a 7-3 margin.

Houston attempted to answer right away, loading the bases with one out in the home half of the fourth. However, Woodall slammed the door shut with a strikeout and a grounder to short to preserve East Carolina's four-run cushion.

As the game went down the stretch, the Cougars managed two more solo home runs to lead off the fifth and sixth innings by Kati Ray Brown and Shaw. The Pirates had more than enough to match, scoring four runs in the sixth and seventh frames to cement the win. Estes and Yoder accounted for three of the tallies in the sixth with one and two-run singles respectively while Inae put the exclamation mark on the proceedings with an RBI single in the seventh.

Game Four: Houston 6, East Carolina 1     Houston scored four runs in the bottom of the second inning with two outs to muster up all the offense it would need to claim the series finale.

Rachel Hertenberger (6-8) twirled a complete game, giving up just one run on three hits with a walk and six strikeouts. Woodall (6-13) returned to the circle in her second start of the day, allowing four runs on six hits and a walk in 1.2 innings of work.

Woodring drove in the only run of the contest for East Carolina while Stewart recorded three RBI to lift the Cougars.

With the bases loaded in the bottom of the second, Stewart took a 1-0 pitch and laced it into the gap in left center to clear the bases and put Houston ahead 3-0. Rock Benavides added a run via a RBI single, leaving the Cougars with a 4-0 edge through two complete.

Queen extended the Houston lead out to 6-0 in the bottom of the fourth with a two-run home run before Woodring capped the scoring with an RBI single in the top of the fifth.
Go Back