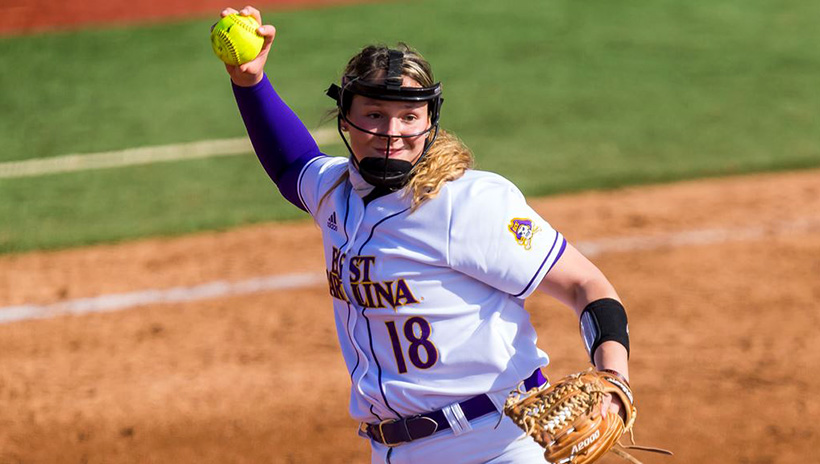 TAMPA, Fla.     Backed by a complete-game shutout by Kama Woodall, East Carolina defeated South Florida 1-0 in eight innings Sunday in the finale of an American Athletic Conference series at the USF Softball Stadium.

The Pirates improve to 12-32 overall and 3-17 in league play in advance of their final series of the regular season next weekend against Memphis in Greenville. The Bulls drop to 27-13 and 15-4.

Woodall (7-18) stymied the South Florida offense all game long, scattering two hits while walking two and striking out one. The complete game was her 13th of the campaign. Georgina Corrick (20-5) suffered just her fifth loss of 2021, allowing an unearned run and two hits. She finished with two walks and eight strikeouts.

Logyn Estes and Taylor Woodring accounted for ECU's two hits while Bethaney Keen and Kelsey Lay did the same for USF. Woodring notched the only extra-base hit of the contest with a double that led off the eighth.

The Bulls put up their only real threat to score in the bottom of the fourth. Keen and Vivian Ponn reached after getting hit with one out, but Woodall responded by retiring the next two hitters.

With the contest working its way into the eighth inning, Woodring roped a two-bagger to left to spark the offense. After two quick outs, Inae was intentionally walked and Womack put a ball in play that resulted in an error — allowing pinch runner Gianna Edwards to cross home plate for the winning run. Woodall retired South Florida in order in the bottom of the frame to preserve the win.

Up Next: East Carolina welcomes Memphis to Max R. Joyner Family Stadium Friday to kick off the final series of the regular season. The Pirates and Tigers will play a doubleheader beginning at 2 p.m.
Go Back