Unanimous Supreme Court: Illegal aliens are not eligible for permanent resident status | Beaufort County Now | This could be a real game changer 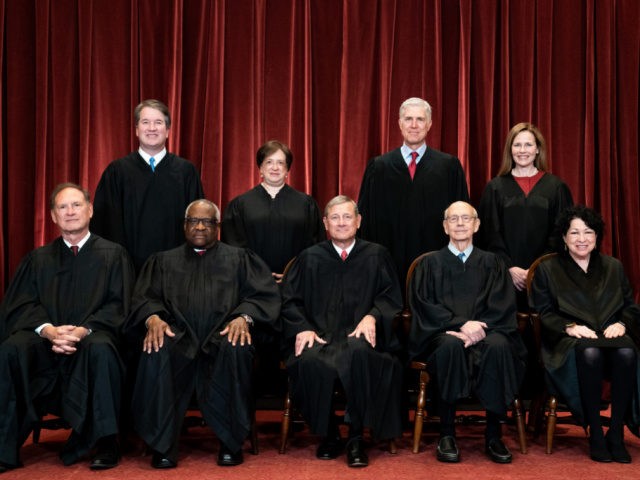 The U.S. Supreme Court (SCOTUS) on Monday held that illegal aliens who were subsequently given Temporary Protected Status (TPS) are not eligible for green cards to permanently remain in the U.S.

Justice Elena Kagan, appointed to the court by former President Obama, wrote in a 9-0 decision that a “TPS recipient who entered the United States unlawfully is not eligible … for [lawful permanent resident] status merely by dint of his TPS.”

Jose Santos Sanchez, an illegal alien from El Salvador, came to the U.S. illegally in 1997. In 2001, Sanchez was provided TPS, a nonimmigrant status that allows him to remain in the U.S. for as long as the Department of Homeland Security (DHS) extends TPS for El Salvador.

In 2014, Sanchez applied for lawful permanent resident status, commonly known as a green card, to permanently resettle in the U.S. After the United States Citizenship and Immigration Services (USCIS) agency denied Sanchez’s green card application on the grounds that he first entered the U.S. illegally, Sanchez challenged the decision in a federal district court and won.

Then, the U.S. Court of Appeals for the Third Circuit reversed the decision, finding that because Sanchez first entered the U.S. illegally, he was not eligible for a green card under federal immigration law.

The Supreme Court held that federal immigration law “applied according to its plain terms, prevents Sanchez from becoming a [lawful permanent resident].”

“The question here is whether the conferral of TPS enables him to obtain [lawful permanent resident] status despite his unlawful entry,” Kagan writes in the Court’s opinion. “We hold that it does not.”

There is no dispute that Sanchez “entered the United States in the late 1990s unlawfully, without inspection.” But as earlier described, §1255 requires a [lawful permanent resident] applicant like Sanchez to have entered the country “lawful[ly],” with “inspection” — that is, to have been admitted. Indeed, §1255 imposes an admission requirement twice over. Its principal provision states that an applicant for [lawful permanent resident] status must have been “inspected and admitted or paroled into the United States.” [Emphasis added]

And another provision says that a person who has worked without authorization in the country — as Sanchez did for several years — may become a [lawful permanent resident] only if his presence in the United States is “pursuant to a lawful admission.” Sanchez has never claimed that he can, without aid from the TPS provision, satisfy those demands for admission. A straightforward application of §1255 thus supports the Government’s decision to deny him [lawful permanent resident] status. [Emphasis added]

And nothing in the conferral of TPS changes that result. [Emphasis added]

Kagan writes that while Congress “could have gone further by deeming TPS recipients to have not only nonimmigrant status but also a lawful admission,” it is not in the Court’s authority “to say that the something it does is not enough.”

“Section 1255 generally requires a lawful admission before a person can obtain [lawful permanent resident] status,” Kagan writes. “Sanchez was not lawfully admitted, and his TPS does not alter that fact. He therefore cannot become a permanent resident of this country. We affirm the judgment below.”

The ruling is the third 9-0 SCOTUS decision on immigration in the last two weeks. The Court unanimously ruled, in an opinion by Associate Justice Sonia Sotomayor, against a previously-deported criminal illegal alien who sought to avoid deportation.

The case is Sanchez v. Mayorkas, No. 20–315 in the Supreme Court of the United States.