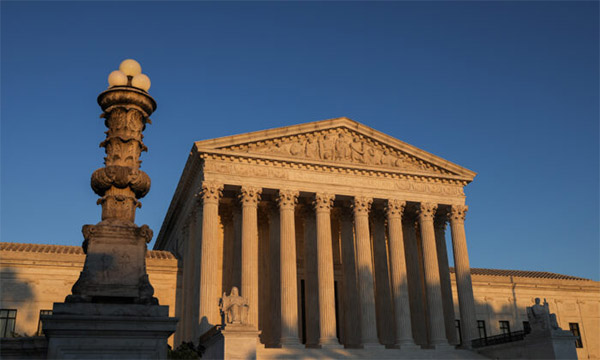 The Supreme Court of the U. S. (SCOTUS) has finally come around to protecting elections.  In a decision handed down today 7-1-21 upheld Arizona's efforts to insure voting integrity.  HeadlineUSA.com is reporting:

The Supreme Court on Thursday upheld election-integrity measures in Arizona—a decision that likely undermines the Biden Justice Department’s recent efforts to harass reform-minded red states and will make it harder for power-grabbing Democrats to wage activist court challenges to the laws being enacted by other GOP legislatures.

The case, Brnovich vs. DNC, determined that Arizona’s restrictions on ballot-harvesting, put in place following the 2016 election, did not violate the Voting Rights Act.

“There is no more sacred duty for a public servant than preserving both the people’s right to vote and their confidence in the election process,” said Arizona Attorney General Mark Brnovich, the plaintiff for the appeal, in a statement released prior to the decision.

“Arizona’s ballot box safeguards are shared by many states, were recommended by a bipartisan commission, and are constitutional because they equally protect us all,” Brnovich said.

In a majority decision penned by conservative Justice Samuel Alito, the court voted 6-3 to reverse that decision, determining that Arizona’s limits on who can return early, absentee ballots for another person and refusal to count ballots cast in the wrong precinct were not racially discriminatory.

“Fraud is a real risk that accompanies mail-in voting even if Arizona had the good fortune to avoid it,” Alito wrote.

“Election fraud has had serious consequences in other States,” Alito continued, pointing to a high-profile 2018 case from North Carolina’s 9th Congressional District. “… The Arizona Legislature was not obligated to wait for something similar to happen closer to home.”

Ironically, in the North Carolina showdown, prominent lawyers such as Democratic National Committee attorney Marc Elias had actually argued the opposite position about ballot-harvesting while attempting to reverse a Republican victory.

During the most recent election, left-wing groups, including a labor union from Los Angeles, blanketed vulnerable parts of Arizona with paid activists, who sometimes engaged in aggressive and confrontational canvassing efforts, as well as helping to “cure” ballots from voters who said it was too hot to go to the polls in places like Maricopa County.

But the inability for third-party activists to collect ballots, as is permitted in neighboring California and other blue states, hindered the Left’s efforts to flip Arizona, once a solid-red bastion of conservatism.

Arizona’s GOP-led legislature subsequently sought an intensive audit of Maricopa’s 2.1 million ballots, which turned up a number of apparent irregularities, potentially casting its certification for Democrat Joe Biden into question.

In a Supreme Court session that has been remarkable for its number of bipartisan—and even unanimous—decisions, two of the final—and most closely watched—cases on the summer docket, including Brnovich, broke along ideological lines, likely adding fuel to the Biden administration’s push for court-packing.

It also throws a wrench in several legislative and legal efforts that congressional Democrats and the Biden Justice Department had deployed in hopes of securing permanent majorities.

That includes the controversial HR1 voting-overhaul, which already appeared doomed after it died last week in the Senate. Among the many ways Democrats sought to nationalize voting under their direct oversight in the blatant power-grab was a measure to mandate ballot-harvesting in every state.

As it had done in trying to intimidate Arizona lawmakers over their audit, the DOJ, now run by failed Supreme Court nominee Merrick Garland, also announced last week that it planned to target Georgia‘s legislature over its effort to close loopholes in the wake of the disastrous 2020 election.

But some speculated that the recent court ruling could derail that effort.

“Any one else think that Alito just killed the DOJ lawsuit against Georgia,” wrote one commenter on the court-centered SCOTUSblog.

In her dissenting opinion, Justice Elena Kagan, an Obama appointee, claimed that the court was weakening the landmark voting rights law for the second time in eight years.

“What is tragic here is that the Court has (yet again) rewritten—in order to weaken—a statute that stands as a monument to America’s greatness, and protects against its basest impulses,” Kagan wrote, joined in her dissent by the court’s other two left-wing justices.

Headline USA reached out to Brnovich’s publicist for further comment after the ruling to address its possible implications, and will update with any response.