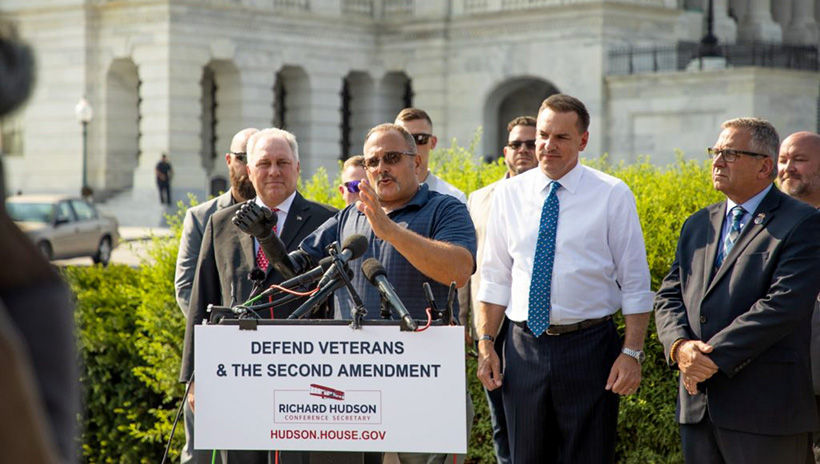 The federal Bureau of Alcohol, Firearms, Tobacco, and Explosives proposed the rule in June. The news conference encouraged people to submit comments to the bureau opposing the rule.

Under the regulation introduced June 7, an individual could face felony charges unless he turns in or destroys a firearm with a brace, destroys the brace, or pays a tax, according to a news release from Hudson's office.

One of the original designers of stabilizing braces helped Hudson make his case. U.S. Army veteran Rick Cicero was injured in combat in Afghanistan in 2010. An improvised explosive device caused significant damage to his right arm and leg.

"Stabilizing braces gave me the ability to get back out and shoot things that I never expected I would be able to again, and my life changed drastically," said Cicero. "Since then, I have been traveling across the country teaching veterans how to shoot again. That brace is the foundation of everything I do because I can take someone who has limited strength in their hands or is missing digits and give them confidence and the skills and capability to grasp a firearm again and get them back to the things that were such a part of their life."

"If this overreach is allowed, it would make a majority of law-abiding veterans and first responders criminals overnight," said U.S. Army veteran Pablo Cadena, who was injured in Iraq in 2008. "These are the people who answered the call of our great nation."

"This regulation is wrong," said U.S. Marine veteran Anson Roberts, who was injured in Iraq in 2007. "It's taking away the self-defense right for me, for my family or some other person in America who is disabled. I don't have the same strength in my hands or my arms or my legs anymore. Using this device helps me protect my family."

Hudson had support from congressional colleagues. "It is perplexing to see how the Biden administration is trying to take away the Second Amendment rights of our disabled veterans," said Rep. Steve Scalise, R-Louisiana, at Hudson's news conference. Scalise holds a top House post as Republican Party whip. "I would urge every American who wants to stand with our disabled veterans and any other American who believes in the Second Amendment, and the ability for every law-abiding citizen to be able to exercise those rights, to go online now and oppose this rule by the Biden Administration."

"But more than anything, we call on the Biden administration to stop this attack on our veterans and just withdraw the rule," Scalise added. "Let's allow veterans to exercise their Second Amendment rights since they risked so much in preserving our rights."

Another news conference speaker, Rep. Mike Bost, R-Illinois, serves as the top Republican on the U.S. House's Veterans Affairs Committee. "The ATF proposal could hurt thousands of law-abiding, gun-owning veterans simply because they use a stabilizing brace," Bost said. "Disabled veterans have given their country enough. The last thing they should be subject to is absurd fines and government overreach."

Attacks on stabilizing braces aren't new. In December 2020, Hudson helped fight a similar ATF rule proposal. Following a letter signed by Hudson and 90 members of Congress, in addition to widespread feedback during a public comment period, ATF revoked the rule on Dec. 23, 2020.

People can comment about the latest ATF regulation through Sept. 8. Hudson is offering a link to submit comments HERE.
Go Back