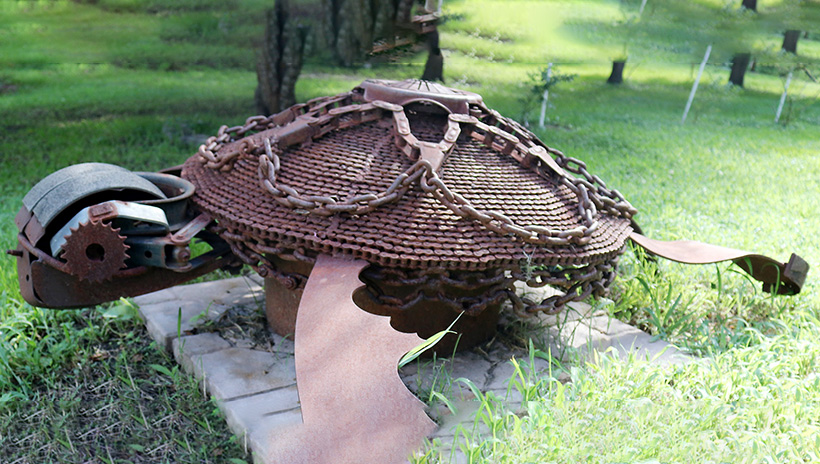 Love A Sea Turtle, a Pitt County-based nonprofit focused on environmental stewardship, hosts events around Greenville, including bike tours and community events, at its garden and orchard. | Photos: Matt Smith

During a humid summer morning in Greenville, Brittany Turner sits at a picnic table under the shade of a tree in the community garden she's tended over the last several years.

While most East Carolina University students are still tucked under their covers, sweat begins to pool around Turner's brow as she preps for the day's activity.

"We're busing in elementary students today for our Wilson on Wheels Bike Camp," said Turner, a Chancellor's Fellow in the ECU Honors College. "They'll get to ride on the greenway." 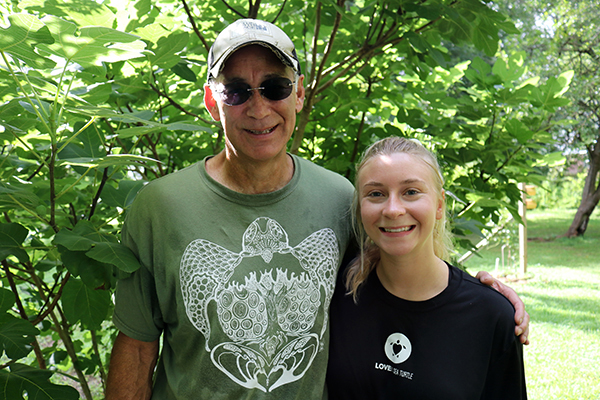 East Carolina University senior Brittany Turner, right, has volunteered with LAST co-president Daniel Sokolovic for six years. This summer she interned with the organization as part of the SECU Public Fellows Internship program.
Introducing the next generation of potential Pirates to the joys of the environment is just a part of what drew Turner to the Pitt County-based Love A Sea Turtle (LAST) organization where she's been a volunteer for the past six years.

This year, Turner was able to partner with LAST as an intern through ECU's Public Service Internship program sponsored by the North Carolina State Employees' Credit Union.

The change in title came with a change in responsibilities, but Turner didn't shy away from the challenge.

"I started volunteering when I was a freshman in high school," Turner said. "LAST is a local group focused on environmental issues, which was something I was interested in. It was a way to give back to the community, but also spend time outside."

LAST's mission includes inspiring others to get involved in student-led community service opportunities and nature-based outdoor programs for underrepresented youth.

As part of her internship, Turner led LAST's summer camp at The SPOT youth center in Wilson. Turner conducted a science, technology, engineering and mathematics (STEM) camp on Mondays, and on Wednesdays, focused on fitness and nutrition.

"It's good for the students to see a different face than the one they typically see during the regular school year," Turner said. "As part of the STEM camp, we've done units where they create paper airplanes and rockets to study the science behind them. Seeing how excited they got over the projects was great. It's something a lot of other students may take for granted."

Turner has put her double major in business administration and fashion merchandising and consumer studies to use during the internship, managing the camp's curriculum, schedule and transportation. Once on the sidelines as a volunteer, she has stepped into the spotlight as LAST's program and marketing coordinator.


"I’ve become a better leader. When I’m at camp, I’m in charge. I’m the one that must make quick decisions and step in and delegate. I’ve gotten much better at that."
– Brittany Turner, business administration and fashion merchandising and consumer studies double major
"The internship evolved very quickly because we received late grant funding that determined the level of summer camps we were able to offer," LAST co-president Daniel Sokolovic said. "She's had a lot of obstacles, but there have been a lot of learning opportunities that have allowed her to adapt and change in a positive way.

"It's been more challenging, but she's risen to the challenge."

Turner agreed that she's grown during the internship.

"I've become a better leader," she said. "When I'm at camp, I'm in charge. I'm the one that must make quick decisions and step in and delegate. I've gotten much better at that."

With the summer winding down, Turner has no plans to slow down with LAST.

"I'll continue to work with the students if I can and help with the community garden and orchard," Turner said. "I plan on working with LAST while I'm in Greenville.

"It's really been a great internship. I really got to go out into the community and work in a business setting. A lot of students haven't had an experience like this. It's a great way to get into the real world and see what a real job is like."

Administered by the Office of Community Engagement and Research, the SECU Public Fellows Internship program at ECU connects the university and regional communities through projects that address community-identified priorities. Students are placed in government and nonprofit positions that allow them to develop leadership, analytical, problem-solving, communication and project management skills.

Learn more about the program HERE.
Go Back