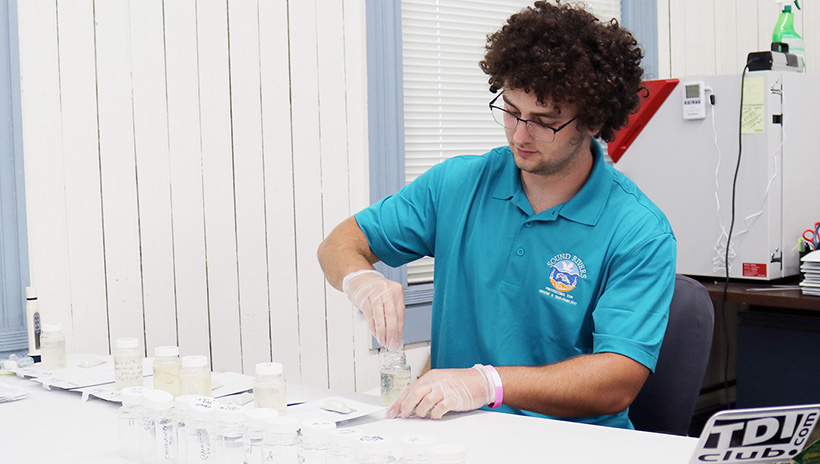 That's why College of Health and Human Performance senior Will Shingleton wasn't afraid to get a little dirty at his internship this summer with Sound Rivers.

Shingleton, an environmental health major and Centennial Fellow in the ECU Honors College, spent much of the summer handling river samples, kayaking down eastern North Carolina waterways and sometimes soaring above the Tar-Pamlico River Basin.

His love of the outdoors led him to the Public Fellows Internship (PFI) program where he connected with the Washington-based nonprofit with the mission of protecting the region's watersheds. 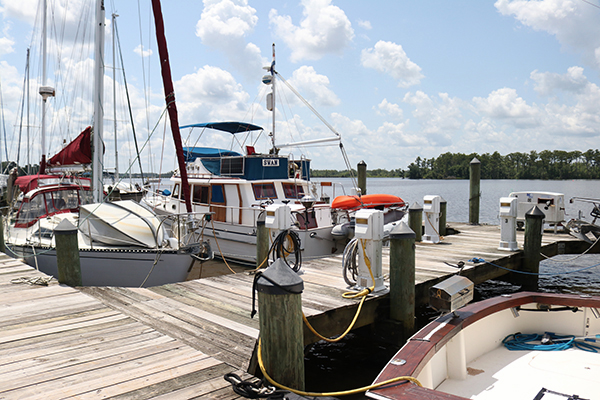 Shingleton’s work with Sound Rivers focused on water quality testing in the Tar-Pamlico and Neuse river basins.
"I knew I wanted to work at Sound Rivers and work outdoors," Shingleton said. "It was the only position I applied for. I wanted to do something local in eastern North Carolina at a nonprofit that had tangible, positive impacts in the area I grew up."

Shingleton is no stranger to the Tar River. He first met Sound Rivers representatives at his job at River Park North. From there, he linked up with the organization and learned about its work keeping an eye on the region's rivers and water systems.

Founded in 2015 with the merger of two of the state's oldest grassroots conservation programs, Sound Rivers employs three full-time riverkeepers that monitor the Tar-Pamlico and Neuse river basins. The group provides both scientific expertise and education resources to community members.

During his internship, Shingleton served as a water-quality intern for Sound Rivers, heading the Swim Guide program at 18 popular recreational sites in the Tar-Pamlico River Basin.

He managed nearly 20 volunteers who collected river samples that are monitored for E. coli bacteria in freshwater and enterococci bacteria in salt water. Shingleton processed the samples and published the results so area residents knew whether their swimming locations were safe for use.

"My favorite part has been the relationship between my weekly duties with Swim Guide and the uncertainty of my other projects that pop up during the week," Shingleton said. "Working here is so different than being in class. You learn a lot of concepts that you think you can apply in the real world, but doing it is different."


"I wanted to do something local in eastern North Carolina at a nonprofit that had tangible, positive impacts in the area I grew up."
– Will Shingleton, environmental health major
Shingleton said the experience improved his skills outside of the classroom, including how he shared science with others.

"I've certainly refined my communication skills, especially working with different generations of people," he said. "I've also had to learn how to convey information in an efficient way. Sharing complicated scientific information with the public in a way that is understandable is a challenging task."

"ECU has great programs and they're in a strong position to help eastern North Carolina's rivers," Barber said. "I'd take trips to the Outer Banks and wonder, 'Why isn't ECU featured more prominently out here?' That's certainly not the case anymore.

"Our Pirates, like Will, are out on the water. Having graduated from ECU, I see a lot of opportunity to make solid research and advocacy partnerships. I hope he got a good taste of how adaptive nonprofit and environmental work can be."

With a semester left in his ECU undergraduate experience, Shingleton provided advice for Pirates looking for meaningful opportunities to contribute to their communities.

"There are so many opportunities at ECU," he said. "Keep your eyes open and you'll find something great like PFI."

Administered by the Office of Community Engagement and Research, the SECU Public Fellows Internship program at ECU connects the university and regional communities through projects that address community-identified priorities. Students are placed in government and nonprofit positions that allow them to develop leadership, analytical, problem-solving, communication and project management skills. Learn more about the program HERE.
Go Back