Published: Tuesday, November 16th, 2021 @ 3:19 am
By: Carolina Journal   ( More Entries )
Publisher's Note: This post appears here courtesy of the Carolina Journal. The author of this post is Dallas Woodhouse. 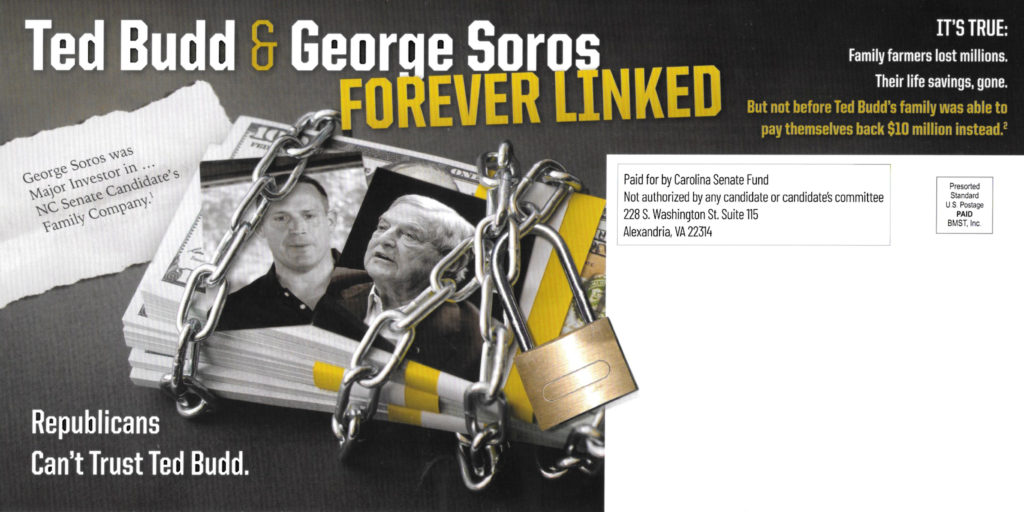 An independent expenditure group connected to former Governor Pat McCrory has launched one of the first known mail attacks in the 2022 U.S. Senate race. The 5 by 11-inch mailer started hitting mailboxes of likely GOP primary voters this week.

The mailer reads that "Republicans can't trust Ted Budd," and that Ted Budd and George Soros are "forever linked."

In September, the News & Observer and other media outlets reported the connection between Congressman Budd and George Soros, the Hungarian-born investor and philanthropist who donates tens of millions to Democrats.

"A Soros investment firm was the largest shareholder of AgriBioTech, a seed company led by Budd's father that filed for bankruptcy in 2000, securities filings show. Congressman Budd was a shareholder but was not an officer," according to the N&O.

The McCrory campaign sent an email to supporters saying the business connection was "outrageous" and calling Soros a "socialist activist and liberal mega-donor," after the N&O reported the story.

The Associated Press' Bryan Anderson reported on October 5 that Budd is "playing defense in North Carolina's GOP Senate primary, as opponents accuse him of benefiting from a bankruptcy that cost farmers millions."

According to federal documents, the 2000 bankruptcy led to hundreds of farmers around the country not receiving the full amount they were owed for millions of dollars in seed.

Congressman Budd told the AP that he did not have an operational role within AgriBioTech and did not personally receive any assets that would have otherwise gone to farmers.

"I was on the outside looking in and just wanted to help the family at the time," Budd said. "We took the best legal advice we could at the time. It's a tough situation when you try to help others. It's kind of a good Samaritan case where you help and make it better, but it's not as good as it should have been. You never want anybody to go through what anybody did in that case. It was a tough deal all around."

According to the AP, McCrory said Budd and his father "ripped off a lot of farmers in tens of millions of dollars."

In a filing at the end of June, the Carolina Senate fund reported $420,000 in donations.

The largest contributor is Lending Tree executive Doug Lebda. In June, he donated $250,000 to the Carolina Senate Fund, which describes itself online as "a super PAC devoted to independently advancing the candidacy of Governor Pat McCrory for the United States Senate."

Other donors include Larry T. Cloninger of Salisbury, president of Cloninger Auto ($100,000); J.P. Cato, president of the women's fashion company Cato ($100,000); and Raleigh businessman Art Pope, who gave $100,000. Pope owns Variety Wholesalers, which operates Roses Discount Stores, and is a longtime backer of conservative politicians and causes including the John Locke Foundation, the parent organization of Carolina Journal.
Go Back