Robinson tells crowd he’ll continue to fight for Christian values, in what he believes is right | Eastern North Carolina Now | Christian pastors should get on board

Robinson tells crowd he’ll continue to fight for Christian values, in what he believes is right 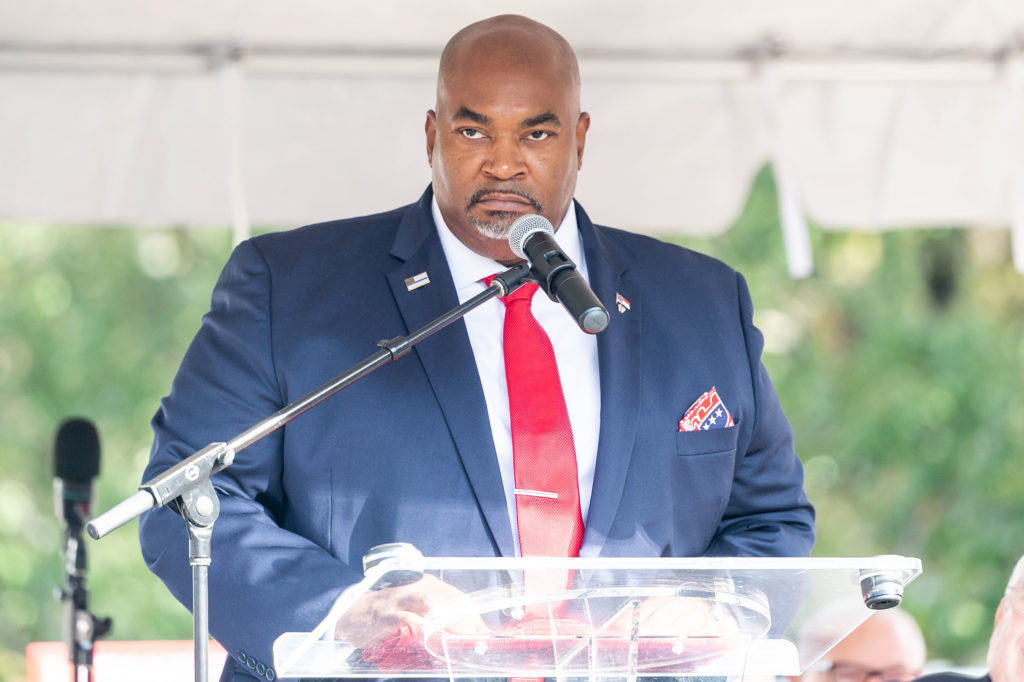 Lt. Gov. Mark Robinson says he’s more determined than ever to keep fighting for what he believes is right.

Robinson, a Republican, spoke Friday, Oct. 29, during a “Stand Up for America” rally on Halifax Mall in downtown Raleigh.

According to the website for the event, hosted by Return America from Wallburg in Davidson County, it was held as a way to speak out against people who support socialism, communism, are anti-God, anti-Christian, and anti-moral. It gave people a way to show their support for the American flag, the pro-life movement, the First and Second Amendments, and law enforcement.

Ron Baity, president of Return America and pastor of Berean Baptist Church in Winston-Salem, introduced Robinson.  “I noticed today there are some religious movements in the state who almost had a hysterical nervous breakdown when they heard he might run for governor,” said, Baity, who presented Robinson with Return America’s Patriot Award.

“We want to go on the record right now that there are multitudes of churches and pastors, several thousand represented today, and we go on record, (that) we welcome the possibility that he might be the next governor of the state of North Carolina,” Baity said.

Robinson said earlier this week he’s 95% sure he’ll run for governor, and some thought he might make that announcement at the rally. Robinson didn’t, though he started by thanking God.

“Let me say that again real loud for the naysayers. I am going to thank my Lord and Savior, Jesus Christ, for blessing this Christian nation.

“We give him thanks first and foremost. There are a lot of people out there who don’t like to hear that. I reiterate my statement from before. If you don’t like it, nobody is holding you here. You can leave God’s country, and we will not miss you,” he said.

Robinson called out some in the news media and government officials, namely Gov. Roy Cooper, Attorney General Josh Stein, and the N.C. Department of Public Instruction for twisting a message he gave in June during a speech at Asbury Baptist Church in Seagrove. During his speech, Robinson called sexual acts of homosexuals and transgender people “filth,” and he pointed to books depicting pornography that are available in some school libraries.

“They want me to resign. I am going to resign myself to keep kicking them in the teeth, keep delivering the message of truth to the people of North Carolina, to continue to keep standing up for the constitutional rights of every citizen of this state, regardless of how they identify, and I am going to resign myself to continue to follow the wisdom and teaching of Jesus Christ and preach that message every time I get a chance,” he said.

Robinson said he is inspired by people of courage. He cited former President Trump, who put America first.

“I stand for the American people because I love our flag, I love our nation, and I love our way of life. That is what inspires courage. What we currently see in this nation inspires fear and sadness,” he said.

“This is government of the people, by the people, for the people, not by the Bidens, for the Bidens, and for the Bidens.  It’s time for us to take it back. Stand with courage. Stand with conviction. Tell our enemies on the other side of the aisle that would drag this nation down into a socialist hellhole that you will only do it as you run past me, lying on the ground, choking on my blood. Because I will not give up this nation to you. It isn’t yours. You didn’t build it. You didn’t defend it, and you will not own it. We will, the Christian patriots of this nation. Stand strong, stand proud. Let’s save this state and nation. Let’s be the people to preserve freedom for the future.”