Hidden Raleigh war memorial tells the unforgettable story of our Greatest Generation | Beaufort County Now | It has been a long time since I lived on Hillock Drive, which runs off North Hills Drive near Crabtree Valley Mall in Raleigh. My parents moved there with their two children, Joy and Brad, in 1971. I came along two years later as, my mom says, their “postscript.”

Published: Friday, December 3rd, 2021 @ 7:14 am
By: Carolina Journal   ( More Entries )
Publisher's Note: This post appears here courtesy of the Carolina Journal. The author of this post is Dallas Woodhouse. 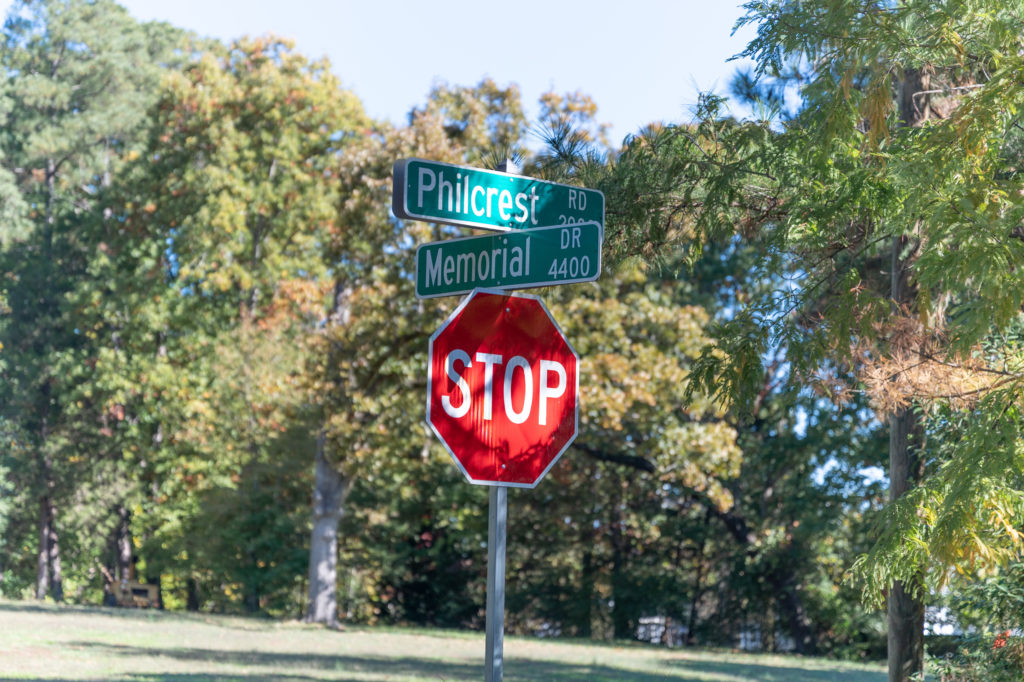 The memorial park for the fallen crew was to be connected to a church that was never built, leaving the park alone with no one to look after it. (CJ photo by Maya Reagan)


It has been a long time since I lived on Hillock Drive, which runs off North Hills Drive near Crabtree Valley Mall in Raleigh. My parents moved there with their two children, Joy and Brad, in 1971. I came along two years later as, my mom says, their "postscript." It was a great, safe neighborhood to grow up in, and I spent my entire childhood there.

A short walk from up the street was a unique mystery. Memorial is a short street with only about four houses on each side. It measures less than a tenth of a mile, and it connects with Hillock. Memorial Drive also connects with Philcrest Road, and at that corner is a long-forgotten World War II memorial.

Today it's overgrown. A flagpole there is rusty and surrounded by overgrowth. A plaque about the memorial park was removed decades ago. Few people driving by today would know it's a memorial to the Greatest Generation, and for a Raleigh hero and his crew forever lost at sea.

Thomas Lombard Philbrick was born April 18, 1915. He grew up in Raleigh and attended Broughton High School, where he was active in drama. At 23, he married Eliza Willie "Bill" Andrews on Aug. 20, 1938.

According to his draft card at the time of his enlistment, Philbrick lived with his young wife at the Mansion Park Hotel on the corner of Edenton and Blount streets in downtown Raleigh.

The four-story building, with its many gables and turrets, was solid brick and in Queen Anne-style. It was designed by Raleigh's enigmatic 19th-century architect Adolphus Gustavus Bauer. After its completion in 1899, Meredith College occupied the site for the next quarter-century. When Meredith relocated its campus to its current home on Hillsboro Street in 1926, the Blount Street building became the Mansion Park Hotel.

After World War II, the outdated hotel fell out of favor with travelers, and within five years it was closed. In 1951, the state bought the property and built a parking lot.

The Philbricks eventually began a life together on New Bern Avenue in Raleigh, near the current day Terry Sanford Federal Building. But the couple had plans to settle down north of the capital city, on Philbrick family property.

As reported by the News and Observer on Independence Day 1943, Philbrick received his silver navigator's wings in Texas and was commissioned as a second lieutenant.

By late 1944, the Americans had been beating back the Japanese since their victory at Midway in June 1942. Philbrick was no novice to the air war, now being fought all over the South Pacific. He had more than 25 missions as a navigator with the B-24 "Liberator" bomber as a member of the 868th Bomber Squadron, part of the 13th Army Air Corps. The 868th was the "Snoopers."

For Philbrick and the other men in the bomber squadron, their B-24 carried a top-secret technology designed to help win the war - on-board radar. Flying at night, the bombers of the 868th would take off alone to attack Japanese ships and land-based targets in the Pacific. In September 1944, Philbrick and his 11-man crew were on the front lines of the campaign to retake the Philippines.

As navigator, Philbrick's job was to plot a course to the target and to safely return. It had been almost a month since the 868th had moved from their base in Los Negros to Noemfoor Island in the Irian Jaya area of Indonesia. American paratroopers had only recently taken the island from the Japanese. The 868th's planes were stationed at Kornasoren airfield - now known as Yebrurro - built by the Japanese before the allied invasion in July.

On Sept. 21, 1944, the mission for Philbrick and crew was to fly a bombing run on Menado in the northern Celebes islands. There, the lone bomber would strike the Japanese in the dead of night; being just four days past "new moon," the sky would be near pitch black. The plane was one of 32 original bombers that arrived at the squadron in January 1944. A year later, only 13 would remain.

Philbrick and his crew were scheduled to take off at 10 p.m. and fly northeast to bomb Menado.

Lt. Isaac Hanff guided the plane down the runway, and she lifted off into the dark Pacific night sky. Philbrick was busy plotting navigation data while the gunners watched for any signs of Japanese fighters waiting to ambush the lone aircraft as she took off.

Trouble began shortly after the B-24 became airborne. The tower operator watched the plan lose altitude before climbing again. That wasn't normal, so he called the aircraft and asked if anything was wrong. Tech Sgt. Donnell Walker radioed back that his pilots indicated they had lost one of their engines and are returning to the airfield. The B-24, already miles out to sea, began to bank around to come back to the island. At one point, the crew asked that searchlights be turned on and directed toward their position.

Out at sea, a Royal Australian Navy Corvette crew watched as the searchlight lit up the night sky.

The tower operator called for a status update. He was told one of the engines was "feathering" - a propeller spinning but engine not running - and they were losing a lot of altitude and intended to ditch the aircraft in the ocean. Airspeed was 130 mph, not enough to keep them airborne. The crew quickly scrambled to prepare for a "swim."

By this time, the Australian Corvette was at battle stations and watched Philbrick's B-24 plunge into the sea. The commander directed the crew to take the Corvette toward the crash location and look for survivors. About the same time, an L-5 "Sentinel" took off from Kornasoren and flew to the crash site, where it illuminated the area with flares.

Neither the Corvette nor the little "Sentinel" spotted any survivors. Philbrick and the other 10 men who gave their lives that night in 1944 were officially listed as missing, presumed dead. Their plane sank in over 600 feet of water, the crew never found.

Back in Raleigh, Philbrick's parents were determined to memorialize their son and his comrades.

"Amid the quiet dignity of a landscaped acre of pines, dedicatory services were held for the Thomas L. Philbrick Memorial Park, a grove set aside as a memorial to a Raleigh youth and his crewmates who lost their lives in World War II.

The park was laid out by his father and mother on the site Philbrick had chosen for a post-war home.

The Rev. J. Charles Reichard spoke of talking with the crew just before it departed for its final mission. He declared he could still hear them say, "Plan, work, and pray, and see that it does not happen again. ... Let it never appear as our gift was in vain."

As reported by the News and Observer: N.C. Gov. Robert Greg Cherry praised the spirit of American youth in the past conflict and declared that surviving soldiers and those whose liberty was saved through sacrifice must never forget those who died for them.

The dedication service included the playing of Taps and the Star-Spangled Banner.


The park was to be connected to a church that was never built, leaving the park alone with no one to look after it. In the park was a plaque, which bore the names of the crew members.

That plaque is now with Dr. Russell Philbrick, a retired N.C. State professor of physics and of atmospheric sciences. He is Philbrick's nephew and owns the memorial park site, which he inherited from his grandparents.

He remembers, as a young child, greeting his uncle while home on leave from the service. His uncle picked him up and put him on his shoulders. He remembers the dedication ceremony and the park fondly.

"It was a special place in my young time. We would go down to the park and help clean it up and trim things," said Dr. Philbrick. "It was something that was very special to my grandparents. It was intended to ease the grief of losing their son"

Philbrick and Eliza never had children. She never remarried. Widowed at age 30, she lived another 39 years. Lt. Philbrick's father lived 25 years after his son died, passing in Raleigh in 1969. His mother died in 1978. He left behind three siblings.

Time and distance have made it difficult for the family to tend to the memorial. But its existence is still a source of comfort for the surviving family, as are the words spoken by Reichard at the park dedication.

"The power of common sorrow binds you to the bosom of the Father, and to each other. As to your first cry in the night, only God can answer you as to why your own were taken. Since some had to go, by giving yours, your own capacity for giving is brought out into glorious light."
Go Back