The State finally has a budget...biggest ever | Beaufort County Now | Something for everyone

The State finally has a budget...biggest ever 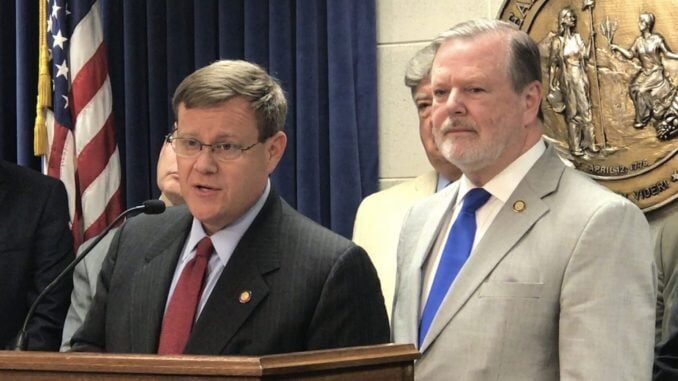 Lawmakers at the General Assembly have finalized the state’s budget proposal to send to Gov. Roy Cooper, which comes in at $52.9 billion over the biennium.

If the budget contained in Senate Bill 105 passes and is signed by the Democratic governor, the state’s Savings Reserves, often called the Rainy Day Fund, will top $4.25 billion.

“This budget represents months of hard work and good-faith negotiations between Republicans and Democrats, House and Senate, and our Governor,” House Speaker Tim Moore (R-Kings Mountain) said in a press release. “Although we have many differences, we each had the common goal of coming together to create a spending plan for the state, one of the General Assembly’s most important constitutional obligations. In the end, I am confident that we have come together to design a budget that truly meets the most critical needs of all North Carolinians.”

In a separate statement, Senate Leader Phil Berger (R-Eden) said that “We have made significant progress over nearly two months of good-faith negotiations with the Governor, and I’m optimistic that the budget will have a strong bipartisan vote and that Gov. Cooper will sign it into law.”

The House and Senate are expected to vote this week.

Education spending, around $1.5 billion above the base budget in recurring funds, is a top priority with salary and hourly wage increases in K-12 and at the secondary levels.

The average raise for teachers over the biennium is 6.7%. Teachers will also be eligible for up to $2,800 in bonuses and the usual teacher pay step increases are also included in the proposal.

State retirees will see a five percent boost over the biennium in a two percent range for 2021-22 and three percent in 2022-23.

Over the biennium, community college faculty will receive a 6% increase.

The NC Promise Tuition Plan allows in-state students to pay only $500 and out-of-state students pay $2,500 per semester. Schools currently part of the Plan include Elizabeth City State University, the University of North Carolina at Pembroke, and Western Carolina University.

Fayetteville State University has joined the plan and around $11.5 million in additional funds will be added in 2022-23 to include the school.

Another topline item in the budget is healthcare-related spending including extensions to post-partum benefits beginning in April 2022 and $150 million allocated for child advocacy centers. Another $150 million drawn from the State Fiscal Recovery Fund will go to address lead and asbestos in school and childcare centers.

Medicaid expansion is not in the budget. Cooper has vetoed all previous budgets presented to him that did not include Medicaid Expansion. The budget, however, does include the creation of a joint legislative committee to study access to healthcare in the states.

Roughly $5.9 billion in state funds is in the budget for infrastructure projects and capital projects, including $878 million to state agencies, $1 billion to the UNC System, and $400 million to community colleges.

A modified version of the various tax cut plans that worked their way through the General Assembly this session also has a spot in the budget, which includes increasing the zero-tax bracket to $25,500.

Beginning in 2023, over the next six years that follow, the state’s personal income tax rate will be incrementally decreased from the current 5.25% down to 3.99 %. Additionally, child tax credits are increased by $500 per child.

Corporate taxes will see a similar declining sliding scale. That tax will be phased out over a six year period beginning in 2025.

Military pensions will no longer be taxed. The estimate provided by the legislature for the impact on state revenues is around $30 million a year.

PPP loan forgiveness is also included in the tax-related items in the budget.

Policy items included in the budget include revisiting collusive settlement agreements and statewide emergency declarations. The legislature passed bills on both topics only to have Cooper veto them.

A section is also included prohibiting collusive settlements by the N.C. Attorney General by including a new section in state statute stating in cases where lawmakers are a party or have intervened in a case, that a “consent judgment shall be jointly approved by the Speaker of the House of Representatives and the President Pro Tempore of the Senate, or by and through counsel of their choice, before the judgment may be entered.”

In education policy changes, Opportunity Scholarship eligibility requirements include increasing the program’s income threshold from 150% to 175% of the federal reduced-price-lunch level.

This change is identical to part Senate Bill 671, Changes to the K-12 Scholarship Programs, which did not emerge from the House Rules, Calendar and Operations Committee earlier this spring.