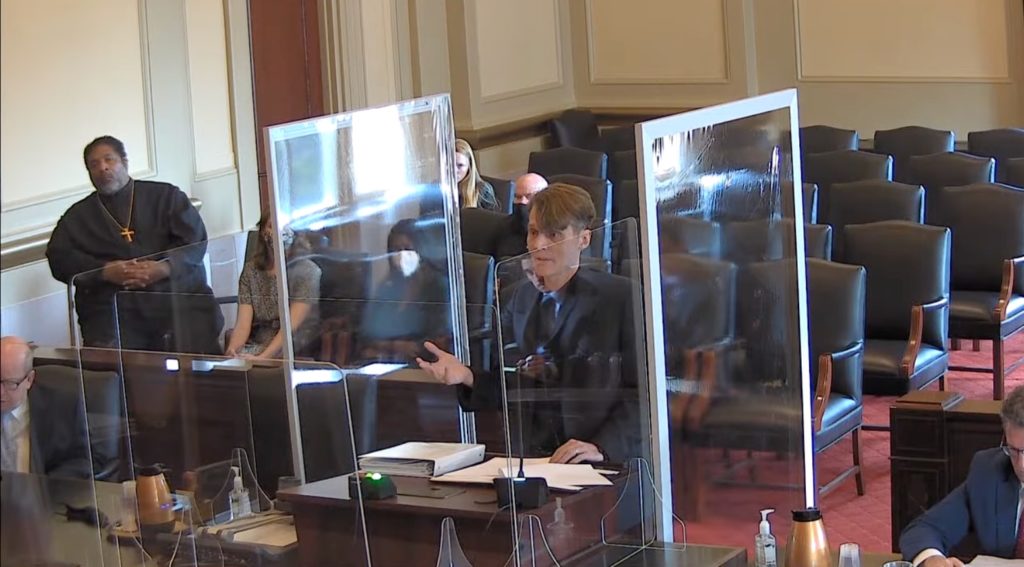 The Rev. William Barber, left, listens as attorney Scott Holmes argues at the N.C. Court of Appeals. (Image from YouTube)


The N.C. Court of Appeals has upheld a second-degree trespass conviction against left-wing activist the Rev. William Barber. The conviction stemmed from a 2017 protest Barber led at the state Legislative Building against Republican leaders of the General Assembly.

"Defendant led a group of approximately [50] people through the General Assembly office complex, protesting the inaction by our legislature to implement certain health care policy," wrote Judge Chris Dillon for the court. "The protest, which included 'call and response' chants led by Defendant, triggered complaints from legislative staff."

"Under the rules governing the legislative complex, visitors 'may not disturb or act in a manner that will imminently disturb the General Assembly,'" Dillon added. "Disruptive visitors are told to stop their behavior, and if they refuse, they are asked to leave immediately."

"In accordance with these rules, the General Assembly's Police Chief repeatedly told Defendant and the group he was leading to lower their noise level, or they would be subject to arrest," the opinion continued. "The Police Chief then specifically told Defendant to stop leading the chants and leave. Defendant, however, did not leave, and the protest continued in a manner that proceeded to disturb the work of legislative staff. Accordingly, Defendant was charged with trespass."

Dillon and fellow Judge Jeffery Carpenter rejected Barber's technical arguments against the conviction, citing a 2020 N.C. Supreme Court precedent. Barber's lawyer had argued that the procedure used to convict the activist was improper.

The two judges also disagreed with Barber's claim that the conviction violated his First Amendment rights to speak at the Legislative Building.

"We conclude that the First Amendment is not implicated in the conduct for which Defendant was charged," Dillon wrote. "This is not a case about free speech - it is a case about loud speech. Defendant was not expelled from the General Assembly for the content of his words. He was removed for their volume."

Dillon and Carpenter labeled the General Assembly's rules reasonable. "We hold that the interior of the General Assembly is not an unlimited public forum," Dillon wrote. "Although important speech is conducted within the building, the building is not a quintessential community venue, such as a public street, sidewalk, or park."

"The interior of the General Assembly complex is comparable to a courthouse in this regard," the majority opinion added. "Certainly, while citizens are free to visit the General Assembly and communicate with members and staff, the government may prohibit loud, boisterous conduct on a content-neutral basis that would affect the ability of members and staff to carry on legislative functions."

The third judge in the case, Lucy Inman, wrote a separate concurring opinion. Though agreeing with the outcome of the case and much of Dillon's opinion, Inman would have addressed Barber's First Amendment claims with a "different analysis."

Unlike the majority, Inman would label a hallway within the Legislative Building a "designated public forum" subject to some free-speech protections. "I would hold that Defendant had every right to engage in protected speech in the hallway of the Legislative Building subject to reasonable time, place, and manner restrictions that comport with the First Amendment," she wrote.

"Though I diverge from the majority's analysis of Defendant's First Amendment

argument, I concur in its ultimate conclusion that Defendant's constitutional rights were not violated by the trespass conviction," Inman added. "The Building Rule Defendant violated is a reasonable time, place, and manner restriction that survives intermediate scrutiny."

Inman also rejected Barber's argument that the arrest violated his rights under Article I, Section 12 of the N.C. Constitution to "instruct" representatives and "apply to the General Assembly for redress of grievances."

"I am not convinced that Defendant's rights under Article I, Section 12 were violated because he was prohibited from exercising his petition rights in his preferred manner," Inman wrote. "For example, Defendant could have: (1) continued to instruct and petition the General Assembly within the reasonable time, place, and manner restrictions imposed by the Building Rules, including by lowering the volume of his voice and urging his supporters to do the same; (2) distributed a letter, petition, or other writing to legislative offices by mail, facsimile, or email; (3) addressed representatives personally in another public setting outside the Legislative Building; (4) contacted legislative offices by phone; or (5) hired a lobbyist to speak with legislators."

Barber could appeal his conviction to the N.C. Supreme Court. With no dissenting opinion in the case, the state's highest court would not be obligated to take the case.
Go Back