Roberts tries to gloss over judicial corruption | Beaufort County Now | "Only a small percentage are corrupt..." 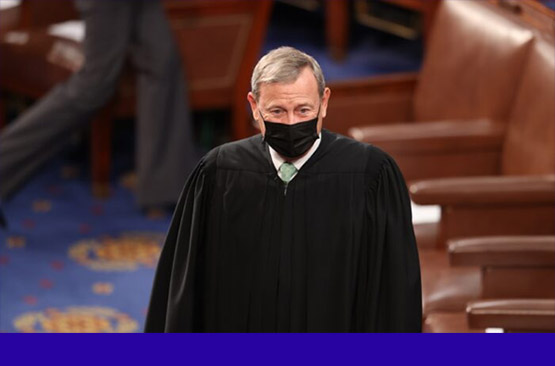 Every year the Chief Justice gets up on his soapbox and talks down to the rest of us.  John Roberts did just that last week.  He issued his “Annual Report on the Federal Judiciary.”

At a time when the public’s respect for government is at a historical low ebb Roberts told us that just because nearly a thousand Federal judges were caught in conflict of interest situations by the Wall Street Journal was anything important enough to do anything about it...except maybe hold a few workshops.  Roberts reduced the corruption to “well, not everyone is crooked…”  Yea, right.

What he fails to mention are the citizens who found themselves at the mercy of these judges who imposed rules when they were not following the rules themselves.  Where’s the justice in that?

Zachary Stieber, writing for the Epoch Times.com, has the story:

The chief justice of the Supreme Court in his year-end report called on federal judges to work hard to adhere to ethics rules after over 100 were caught violating a rule that requires judges recuse in any matter in which they have a personal financial interest.

The George W. Bush nominee portrayed the number of violations as small, noting that they represented less than three-hundredths of one percent of the 2.5 million civil cases filed in the district courts in years studied.

“Let me be crystal clear: the Judiciary takes this matter seriously. We expect judges to adhere to the highest standards, and those judges violated an ethics rule. But I do want to put these lapses in context,” he said.

The wording drew a response by James Grimaldi, one of the Journal investigators, who said his team investigated tens of thousands of cases, not 2.5 million.

“The Jour­nal’s ini­tial tally was an undercount; it was impossible because of the peculiarities of the judiciary’s financial-disclosure process and incomplete information available on case litigants,” Grimaldi wrote on Twitter, adding that Roberts’ comment “is technically accurate, the suggestion that we could review millions of cases is misleading.”

The Journal said Friday that subsequent reporting raised the rally to at least 950 violations.

Roberts also pointed out that most of the judges involved only had one or two identified violations, painting those instances as likely “unintentional oversights” while singling out judges who had more violations or said they didn’t know of the ethics rule. Each judge is schooled on ethical duties, Roberts noted.

“This context is not excuse. We are duty-bound to strive for 100% compliance because public trust is essential, not incidental, to our function. Individually, judges must be scrupulously attentive to both the letter and spirit of our rules, as most are. Collectively, our ethics training programs need to be more rigorous. That means more classtime, webinars, and consultations. But it also requires greater attention to promoting a culture of compliance, even when busy dockets keep judicial calendars full,” he added.

Roberts proposed utilizing technology to check whether stocks held by judges and litigants would raise questions, floating the possibility of obtaining fresh funding from Congress for the purpose.

He also said that top federal legal experts are already working on addressing the problems, including enhancing the ethics training and refresher courses.