J6 judge nods to the Constitution 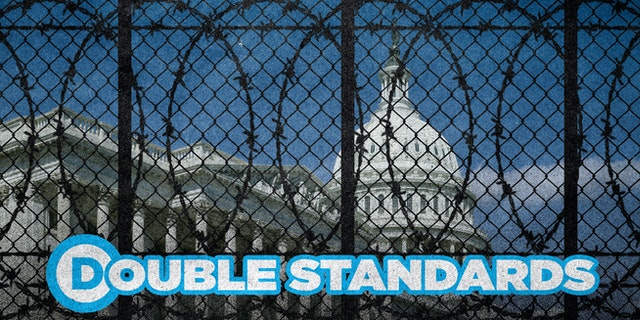 Thomas Gallatin, writing at the Patriot Post makes a point with which we agree:
A U.S. district judge laid into the Biden administration over its double standard when it comes to the prosecution of January 6 rioters versus Black Lives Matter rioters. “I know that the government believes that the January 6th cases are sui generis [one of a kind] and therefore can’t be compared to other cases. But I don’t agree," stated U.S. District Judge Trevor N. McFadden. "It does feel like the government has had two standards here, and I can’t abide by that.”

McFadden added that he could not recall any instance when a nonviolent, first-time offender was “sentenced to serious jail time … regardless of their race, gender or political affiliation.” He was specifically referring to the U.S. prosecutor’s requested sentencing of J6 protester Jenny Cudd, who pled guilty to a misdemeanor trespassing charge. Cudd, a 37-year-old florist from Texas, was guilty of little other than simply walking through the Capitol during the riot.

The Justice Department’s prosecutor wanted her sentenced to 75 days in jail plus one year of probation. McFadden clearly viewed that as excessive, especially in light of the fact that the same Justice Department decided to go easy on a leftist activist who similarly breached government trespassing rules.

Code Pink activist Tighe Barry was arrested in 2018 during Justice Brett Kavanaugh’s confirmation hearings. McFadden observed that the same government prosecutor sought a sentence of just 10 days in jail for Barry. “The government’s sentencing recommendation here is just so disproportionate to other sentences for people who have engaged in similar conduct,” he stated. Not only disproportionate, but totally unreasonable. McFadden noted that Barry had a record of 14 prior arrests, whereas Cudd had never been arrested prior to the January 6th riot.

The judge ended up handing Cudd a sentence of no jail time, two months probation, and a $5,000 fine.

The Biden administration and congressional Democrats led by Nancy Pelosi are trying to make the argument for a two-tiered justice system based upon how it relates to their own political concerns. Prosecutions of rioters that attacked the federal building in Portland, Oregon, have repeatedly been less severe than J6 offenders, and the excuse often repeated by Democrats and the Leftmedia is that their crime was somehow less “dangerous” to the country. According to their logic, it wasn’t an attack against the institution of the American governmental system.

That is in fact a rather disingenuous claim. The weeks of nightly rioting in Portland, directed and carried out by antifa mobs, was explicitly directed at the federal government with the express purpose and aim of a socialist revolution. In other words, the Portland rioters were directly attacking the federal courthouse as it symbolized the greater institution of the U.S. governmental system. To claim otherwise is deceitful.

The January 6 rioters were not seeking to overthrow the American governmental system, but were in fact protesting what they believed to be a stolen election. They were not revolutionaries, nor were they insurrectionists. Rather, they were a bunch of angry Americans who in some cases lost control and in other cases were simply following the crowd.

That Democrats and the Biden administration would create a two-tiered justice system exposes their own lack of commitment to the Founders’ ideal of equality under the law. The J6 rioters have had their constitutional rights trampled in order to satiate some political vendetta, and that is the greater threat to the American Republic.

Hattip to George Schryer for sending us this link.