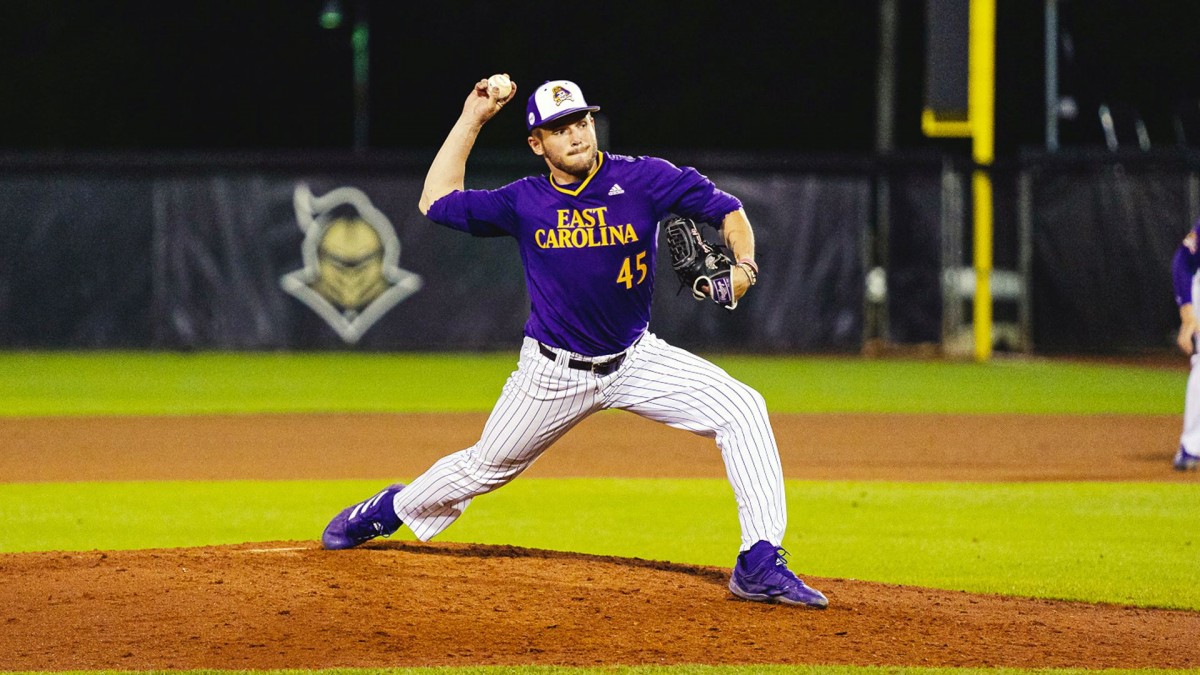 The East Carolina pitching duo of Jake Kuchmaner and Danny Beal allowed just three hits in a 10-0 shutout of UCF Friday night at John Euliano Park in American Athletic Conference action. With the victory, the Pirates earned a weekend series win and improved to 21-15 overall and 6-2 in league play while the Knights dropped to 21-14 and 5-3.

In a scoreless tie going to the fourth frame, the Pirates pushed across a four runs to take a 4-0 lead. Lane Hoover got things going with a leadoff walk and took third on Josh Moylan's doubled down the right field line. Cam Clonch plated Hoover and Moylan with a single back up the middle before taking third on Jacob Jenkins-Cowart's single down the left field line on a hit and run. Jacob Starling's RBI ground out scored Clonch and Jenkins-Cowart touched home on Bryson Worrell's fielder's choice coupled with a Knight error.

Kuchmaner (4-2) earned the win tossing 5.1 scoreless frames where he allowed two hits with one walk and four strikeouts before he exited the game. Beal notched his first save of the season working 3.2 scoreless relief innings giving up one hit and fanning a career-high five batters. Together the duo faced three batters over the minimum and at one point had retired 20-straight from the first inning to the eighth.

William Saxton (3-2) suffered the loss surrendering eight runs (three earned) on seven hits with five walk and four strikeouts in four innings out of the bullpen. Starter Hunter Patteson went three scoreless frames with a pair of strikeouts before leaving the game with an injury. David Litchfield also saw action out of the bullpen for the Knights allowing two runs (both earned) on two hits with a walk and a pair of strikeouts in two frames.

The Pirates added a run in the fifth and three in the sixth extending their lead to 8-0. With two away in the fifth, Hoover reached on an infield single and took second on a Moylan walk. Both runners moved up on a double steal and Hoover would cross home on an errant throw by Andrew Sundean to third base.

Ben Newton's fielder's choice RBI in the sixth scored Jenkins-Cowart for the first run of the stanza and two batters later, Hoover plated Starling and Newton on an infield single.

Worrell's two-run home run in the ninth capped the scoring at 10-0 and securing a league series win. Carter Cunningham drew a one-out walk before crossing home on Worrell's fifth homer of the season, a shot to right field.

ECU will look for its first weekend sweep of the season when it returns to the diamond on Saturday, April 16. First pitch is slated for 2 p.m. (ET) and will be streamed on ESPN+.
Go Back