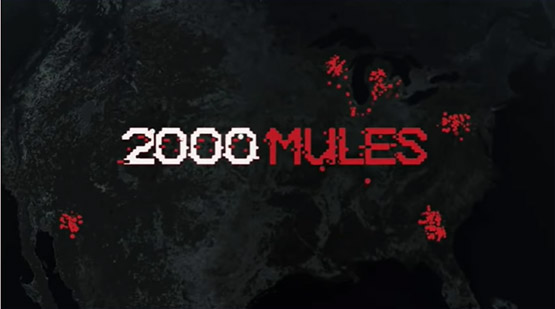 Are you convinced that the 2020 election was rigged? Do you require more proof? See the new film “2,000 Mules” this week, then.

In this historic crime, female voters are targeted. This is not a coincidence.

The leak of the draft opinion occurred the night before 2,000 Mules’ release. A distraction.

Female voters should pay attention to this message. Has your boyfriend or husband ever cheated on you? Was there any proof you needed to prove it? Would the below be enough to confirm your suspicions?

At 3 a.m., your husband arrives home, smelling of alcohol, with lipstick on his collar and the smell of a woman’s perfume all over him, so you ask “Where have you been?”, he answers, “Keep your mouth shut. I didn’t do anything wrong. You’re insane. You believe in conspiracy theories. My text messages aren’t for you to read. My phone’s GPS is off-limits. Are you serious? I will kick you out of this house if you discuss this again.”

In such a situation, what would a woman believe? Do you require more evidence? Are your husband’s reactions sufficient evidence? Seeing the truth with your own eyes makes you sound insane or like a conspiracy theorist?

This is the 2020 election down to the last detail. Everybody knows what happened. We don’t need the Democrat and establishment media’s “proofs.” The Democrats’ hostile reaction is sufficient evidence. The coverup by the media is proof enough.

The evidence isn’t there, they claim. A lot of evidence is available, yet the media, Big Tech, and Democrats are banning discussion and debate. Like Hunter Biden’s laptop, this too was made disappear by the establishment media and social media.

The only proof any intelligent wife or mother requires is the response. The Democrats’ response to the scandal is so unapologetic, so unhinged, and so obscenely overblown with fake indignation that everyone knows the truth. What they are doing is proof of the truth. There can be no doubt.

On election night, Trump was in a landslide victory when suddenly, five major states announced that they would not count the votes until the following morning, marking the first time in history that this had happened at the same time. No big deal, right? Not anything odd.

All five states went to Trump, who held an overwhelming lead. Upon waking, however, the lead was gone. A huge number of new votes – nearly all for Biden – had been found overnight. Republicans were not present in the counting rooms when the votes were discovered. Nothing to worry about, right?

Inform every Democrat you know about your belief in a rigged 2020 election. Observe their reaction. Guess what? They’ll behave exactly as your cheating husband would at 3 a.m. when you caught him with lipstick smeared on his collar.

The movie “2,000 Mules” will show you how millions of fraudulent ballots were spread throughout battleground states to strip Trump of the win.

Liza Carlisle wrote about the movie for Republic Brief:

A new documentary film that will be opening in 300 theatres on May 2 and May 4 presents evidence that a large-scale, illegal vote trafficking did occur in the 2020 election.

“Through the movie ‘2000 Mules,’ we are taking on the ultimate taboo in American politics today—saying that the 2020 election was stolen by systematic, organized fraud committed by the Democrats and the left,” filmmaker Dinesh D’Souza told The Epoch Times of his film.

D’Souza believes that the evidence presented in his new documentary will be conclusive. He told The Epoch Times: “2000 Mules will settle the issue beyond a shadow of a doubt by using two powerful, independent modes of investigation. The evidence is so conclusive, so decisive, that it leaves nothing to argue about.”

Much of the film ‘2000 Mules” focuses on the state of Georgia, where, according to True the Vote—the organization that conducted the investigations—242 metro Atlanta mules made 5,668 stops at drop boxes during elections in late 2020.

Similar illegal activities were found in Arizona, Wisconsin, Pennsylvania, Texas, and Michigan, according to the group.

True the Vote estimates that at least 4.8 million votes were trafficked nationally. The studies were funded by the human rights organization First Freedoms, D’Souza told the Epoch Times.

D’Souza, who is a contributor to The Epoch Times, said an investigative team used cellphone tracking and video footage to prove that unauthorized intermediaries called “mules” collected thousands of absentee ballots from voters and deposited them in drop boxes for money, which is illegal in all 50 states.

“Cellphones emit a unique and identifiable signal or ‘ping.’ Trillions of pings were analyzed by investigators to reconstruct the movements of thousands of mules as they went about their work in the weeks prior to the 2020 presidential election,” the documentary claims.

You do not need “2,000 Mules” to know for certain, though. Go by the cheating husband example. That’s how we really know.