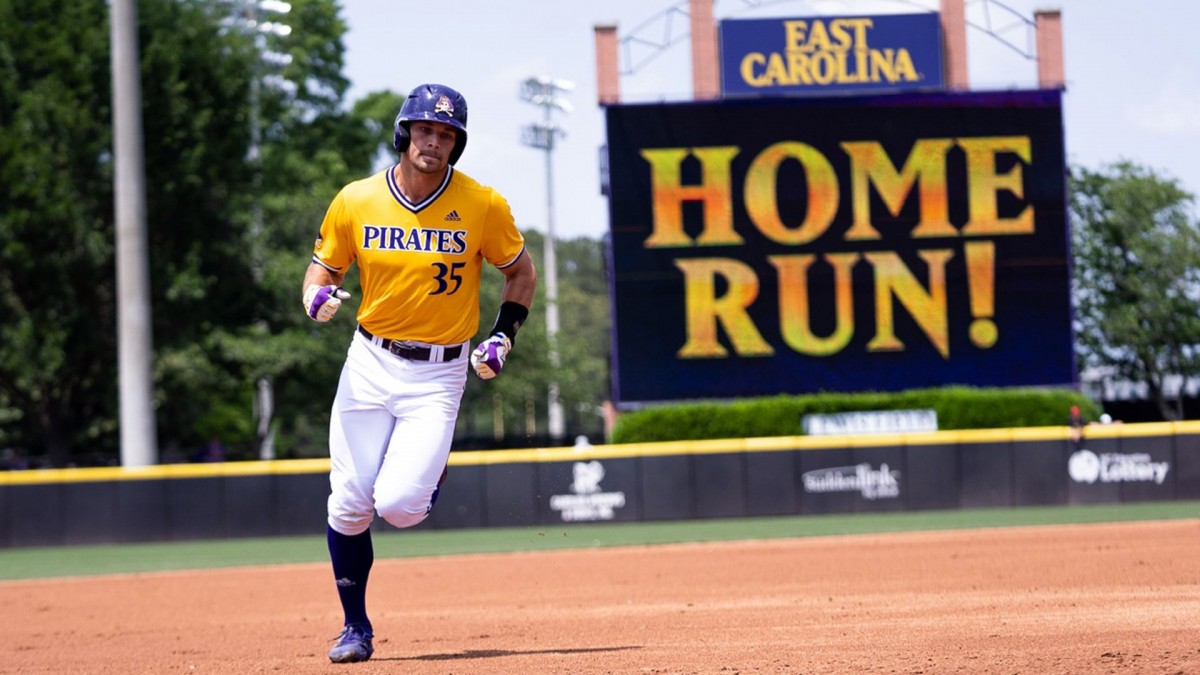 GREENVILLE, N.C.     Bryson Worrell collecting a game-high three hits with two home runs and drove in four helping East Carolina to a 6-3 American Athletic Conference sweep over Cincinnati Sunday afternoon at Lewis Field inside Clark-LeClair Stadium. With the win, the Pirates took sole possession of first place in the league standings improving to 27-18 over and 11-4 in league play, while the Bearcats dropped to 17-24 and 7-8.

With the game knotted at two-all going to the bottom of the third, ECU scored a pair of runs for a 4-2 lead and never looked back. Zach Agnos reached on an infield single too short to start the frame and extended his on-base streak to a team-best 19 games. Lane Hoover followed with a single to right center putting runners on the corners. With one away, Bryson Worrell laced a shot back up the middle plating Agnos and moving Hoover over to third. Three batters later Jacob Starling drew a bases loaded walk pushing across Hoover.

Garrett Saylor (3-3) earned the win allowing one run (earned) on four hits with a walk and three strikeouts in 2.1 innings of relief. Agnos earned his first save of the season (second career) tossing 1.1 scoreless frames with one strikeout. Starter Jake Hunter worked two-plus innings where he allowed a pair of runs (both earned) with a pair of walks and two strikeouts. Danny Beal (1.0 IP, 1 BB) and Trey Yesavage (2.1 IP, 3 BBs, 4 Ks) also got work in relief.

Tristan Weaver (4-5) took the loss after allowing four runs (all earned) on six hits with two walks and seven strikeouts. Zack Segal gave up two runs (both earned) on three hits with a pair of free passes and one strikeout, while Max Bergmann tossed three scoreless frames with a strikeout.

Worrell's two-run blast to left field staked the Pirates to an early 2-0 in the first inning. Lane Hoover singled through the right side with one out and two batters later, he came around to score on Worrell's eighth home run of the season.

Cincinnati evened the game up at two-all in the top of the third inning. Dondrae Bremmer got the stanza going with a soft single through the right side and took second on Kerrington Cross' walk. An infield single by Joe Powell coupled with an error allowed Bremmer to score the first run. Griffin Merritt's sac fly to deep right-center scored Cross tying the game.

ECU added a run in the fourth and fifth innings, while Cincinnati scored once in the fifth. In the fourth, Ben Newton led off with a single through the right side and moved to third on Agnos' double. Hoover plated Newton on an infield single to second for a 5-2 advantage.

The Bearcats pulled within two, 5-3, thanks to a double steal in the fifth inning. With two away, Cole Harting singled to left field which was followed by a Wyatt Stapp base hit to right center putting runners on the corners. Stapp broke for second, while Harting took off for home completing the double base thefts.

Worrell put an exclamation point on the ball game hitting his second homer of the day, ninth of the season, with a mammoth shot to right field. It marked the first time in his career that he tallied long balls from both sides of the plate in a game and was the second time ECU accomplished that feat (other was Alec Makarewicz at Cincinnati on April 1st).

Offensively, the Pirates tallied nine hits and scored three runs with two outs. Joining Worrell with multiple base knocks were Agnos (two) and Hoover (two). Worrell's four RBI tied a career-high and his home run in the first inning extended his hit streak to 11 games (on-base streak to 14).

ECU returns to action on Friday, May 6 when they play at Memphis. First pitch of the weekend is set for 7 p.m. (ET) at FedExPark Avron Fogelman Field.
Go Back