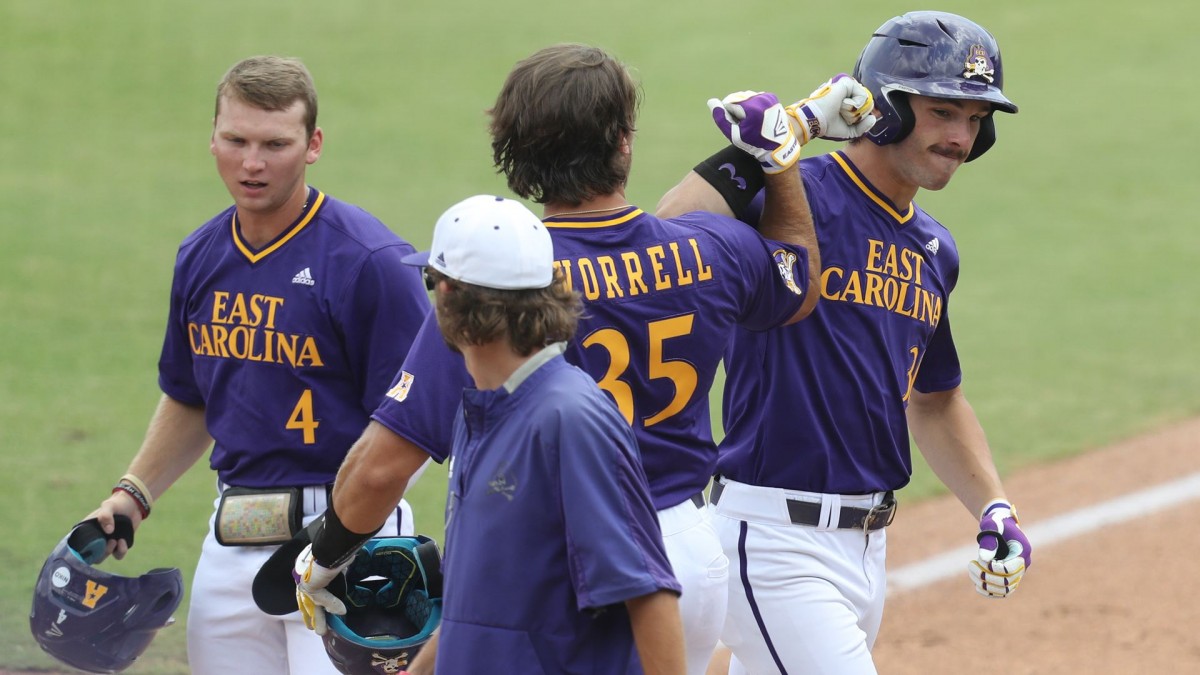 CLEARWATER, Fla.     No. 23 East Carolina belted three home runs on its way to a 15-5 seven inning win over Cincinnati Thursday afternoon in the 2022 TicketSmarter American Baseball Championship at BayCare Ballpark. With the win, the Pirates extended their winning streak to a nations-best 16 games, improve to 40-18 on the year and advance to semifinal round play on Saturday. The Bearcats dropped to 24-30 on the year and will play Tulane Friday at 1 p.m. (ET).

ECU plated four runs in the bottom of the first inning for a 4-0 lead and never looked back. With one away, Lane Hoover singled through the right side, moved to second on Bryson Worrell's walk and both came around to score on Jacob Jenkins-Cowart's three-run blast to left field - his 10th home run of the season. Ben Newton kept the frame going with a walk and was erased on Jacob Starling's fielder's choice. Josh Moylan followed with a single through the right side putting runners on the corners for Alec Makarewicz, who singled home Starling with a shot to center before Moylan was thrown out at third to end the stanza.

Tristan Weaver (5-6) suffered the loss giving up four runs (all earned) on two hits with a pair of walk in one-third of an inning. Garrett Harker was touched for five runs (all earned) on eight hits with a walk and four strikeouts in 3.2 innings. Jackson Murphy (2.2 IP, 6 Hs, 5 Rs, 2 Ks) and Ryan Steckline (0.0 IP, 1 H, 1 R) also pitched in relief for the Bearcats.

The Pirates added a run in the third inning extending their lead to 5-0. Newton doubled to right-center with one out and came around to score two batters later when Moylan legged out his second triple of the tournament to left center.

Cincinnati finally got on the board in the fourth cutting the lead to 5-1 thanks to Kerrington Cross' solo blast to left field.

ECU responded with three in the home half of the fourth pushing its lead to 8-1. Cam Clonch blasted a pinch-hit solo home run to left starting the frame, his sixth round tripper of the year. Agnos and Hoover followed with singles and Jenkins-Cowart's ground out to second plated Agnos. Hoover would score from third on a wild pitch to account for the final run of the stanza.

The Bearcats responded with four in the fifth inning making it an 8-5 ball game. Jake Hansen walked to start the inning and moved to second when Ryan Nicholson was hit by a Yesavage pitch. Cole Harting followed with a single to left field to load the bases and a wild pitch by Yesavage allowed Hansen to cross home. Griffin Merritt reached on an infield single scoring Nicholson and after a Pirate pitching change, Cross reached on an RBI fielder's choice where Harting touched home.

A Makarewicz sac fly and the third hit of the contest by Agnos extended the lead once again for the Pirates to 10-5 in the fifth. Starling walked and took third on Moylan's double up the middle. Makarewicz plated Starling with a sac fly to left and two batters later, Agnos singled home Moylan with a shot through the left side.

The Pirates put the game out of reach in the seventh thanks to Worrell's two-run walk-off homer to left field that capped the scoring 15-5 in seven innings. With two outs, Makarewicz doubled down the right field line and Saylor pushed him to third with his first career hit, a single to the right of the pitcher's mound. Agnos followed with a two-run double scoring Makarewicz and Saylor. Hoover kept the inning going with an RBI double down the left field line and Worrell belted his team-leading 14th home run of the year with a two-run shot to left that landed on one of the Carpenter's practice field for the walk-off victory.

Offensively, the Pirates banged out 17 hits getting multiple from Agnos (four), Hoover (three), Makarewicz (two) and Moylan (three). Jenkins-Cowart led the club with four RBI followed by three from Agnos and two each coming from Makarewicz and Worrell.

ECU returns to the diamond on Saturday, May 28 when it faces the winner of Cincinnati/Tulane in a semifinal matchup. First pitch is slated for 9 a.m. (ET) and will be streamed on ESPN+.
Go Back