Poland has completed its border wall on its border with Belarus to keep out illegal alien migrants from the Middle East and Africa.  Belarus has been allowing planeloads of migrants to fly in from those places, bussing them to the border, and encouraging them to illegally cross into the EU.  Poland has sent its army to the border to stop it and started building its border wall. The Poles would push migrants who managed to get across the border back into Belarus, and used water cannon against them at major crossing points.  Now that border wall is complete making the task to keeping out the migrants easier. 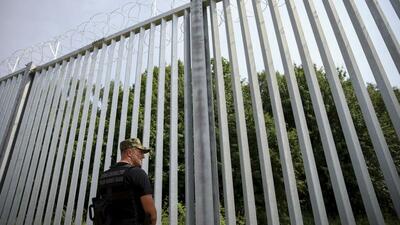 In neighboring Lithuania, the government there is hard at work in completing its own border wall to stop the same migrants crossing from Belarus.  It has also sent its army to the border to stop migrants with orders to use whatever force is necessary to stop any from getting in to the country.

In Europe, Greece, Bulgaria, and Hungary have also built walls along their entire borders with countries from which migrants arrive to stop the migrants.  Greece and Hungary also allow their border guards to use deadly force if necessary to stop migrants.  It is appalling that the anti-American Biden regime stopped the building of the US border wall against migrant invasion.