Sam J .Ervin, Jr., born in Morganton, Burke County, on September 27, 1896, was educated in public school. Ervin later attended UNC-Chapel Hill in 1917, and after his graduation he entered the military and served with the First Division from 1917 until 1919 during World War I. Sam earned his law degree at Harvard in 1922, and he later became a legislator, trial lawyer, and judge of Burke County's criminal court from 1935 to 1937. The aspiring politician continued to climb the judicial ranks, and he later served on North Carolina's Superior Court and then North Carolina's Supreme Court in the late 1940s and early 1950s.

A member of the Democrat party, Sam Ervin was appointed to the U.S. Senate after the death of Clyde Hoey in 1954. Even though Ervin became a Senator via appointment, he was reelected in 1960 and in 1968. From 1973 to 1974, Senator Ervin chaired the Watergate Committee, and he chose not to run in the subsequent 1974 election. Senator Sam passed away on April 23, 1985, in Winston-Salem; his internment is located at the Morganton Forest Hill Cemetery. 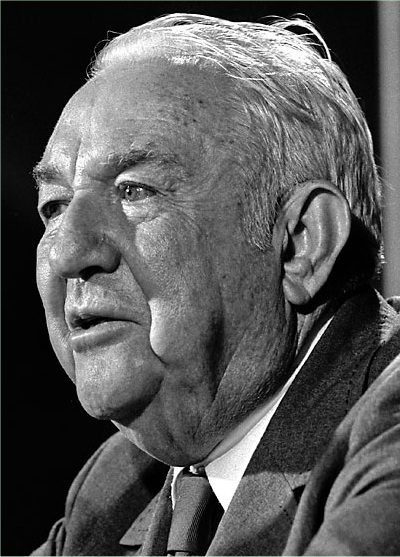 U.S. Senator Samuel J. Ervin
Senator Ervin focused his efforts on legislation that remedied the economy of poverty-stricken western North Carolina. In 1965, one of the first Great Society acts passed by Congress, the Appalachian Regional Development Act, established the Appalachian Regional Commission (ARC). ARC was a tri-partnership between the local, state, and federal government which sought to bring western North Carolina out of poverty for good. Twenty-nine counties in North Carolina were selected for federal grants, and the aid provided roads and health clinics as well as natural resource restoration programs for the mountain region of the state. According to historian William Powell, after three years of substantial success, Senator Ervin, a proposer of the commission, proclaimed that ARC was "one of the few federal programs which recognizes that the ultimate solution of Appalachian problems lies with the economy's private sector." Senator Ervin realized the need for government stimulation if these programs attracted and promoted private business, rather than more government bureaucracy, in western North Carolina.

After his tenure in the Senate, Ervin joined the North Carolina opposition to the Equal Rights Amendment in the 1970s. With the help from North Carolinians Against ERA leader Dorothy Slade, N.C. Supreme Court justice Susie Sharp, and other prominent politicians, Ervin spoke at several rallies and events to denounce the proposed amendment. Due to the strong opinions and successful anti-ERA activists such as Senator Ervin and Justice Sharp, the ERA ultimately failed ratification in the North Carolina legislature during the 1970s.

According to historian Troy Kickler, Ervin's charm, humor, and cleverness made the Senator "an underestimated foe on numerous occasions." When his rivals and enemies seemed to have the upper hand, Senator Sam's Southern charm allowed the seemingly simple politician to rise from the ashes during hard times. In 1968, Senator Ervin pushed for Native American rights, but his opponents on the House Committee on Interior and Insular Affairs formed a legislative roadblock to Ervin's Indian Bill of Rights proposal. Senator Sam, in one of his most cunning political moves while in the Senate, attached the Indian Bill of Rights to a bill that had already passed the House. Bypassing the opposing House Committee on Interior and Insular Affairs, Senator Sam successfully maneuvered around his political enemies, and the Indian Bill of Rights became law in 1968.

Another example of Ervin's political savvy is his involvement in the Watergate investigation. As public confidence in government dissolved, Ervin's witty use of Scripture, historical knowledge, and modest humor made him a popular and reliable figure in the midst of one of the most difficult political times during the 1970s. Senator Sam advocated privacy rights during the Watergate scandal, and his clever use of the Bible drew more citizens to revere the Southern politician. During a Watergate hearing, Ervin proclaimed "one of the prophets described the mountain of the Lord as being a place where every man might dwell under his own vine and fig tree with none to make him afraid."

Senator Sam expressed a profound pride in his native state. According to historian William Powell, in a speech to the North Carolina Literary and Historical Association, Senator Ervin announced, "North Carolinians have always loved to laugh. Their own merry hearts and the many humorists abiding among them have always enabled them to indulge this love." In 1983, the retired Senator wrote in Humor of a Country Lawyer, "In my honest and unbiased judgement, the Good Lord will place the Garden of Eden in North Carolina when He restores it to earth. He will do this because He will have so few changes to make in order to achieve perfection."

His storytelling abilities can also be seen in his many speeches in Washington during his Senate career. For example, Ervin spoke at the Watkins Committee, an investigation into Senator McCarthy's intrusive communist investigations, and he related Senator McCarthy to Uncle Ephraim Swink, an elder mountain man from North Carolina. Uncle Swink, when asked about the impact the Lord had on him during a tent revival, proclaimed, "Brother, he has might nigh ruint me." Senator Sam announced that was what McCarthy had accomplished in the Senate.

North Carolinians still remember Senator Sam. In his home county, both a library and a replica of Ervin's office is operated by the Western Piedmont Community College. In addition, several busts and statues of the famous Senator exist throughout the state; the New West Hall at UNC-Chapel Hill houses a sculpture of Senator Ervin. The university also houses forty-eight items by Senator Ervin and another fifty-four books and biographies about the intriguing senator. Karl Campbell's 2007 biography on Senator Sam remains the latest assessment of Ervin's political career. Campbell presents both the senator's strengths and weaknesses, from his advocacy for civil liberties and southern hero distinction to his opposition to the ERA and civil rights. Numerous historians, journalists, and citizens alike continue to remember Senator Ervin's influence on North Carolina politics. In 1971, the Greensboro Daily News reported that "Senator Ervin is the most North Carolinian of North Carolinians. This kind of man seems to be an ornament of Tar Heel History."