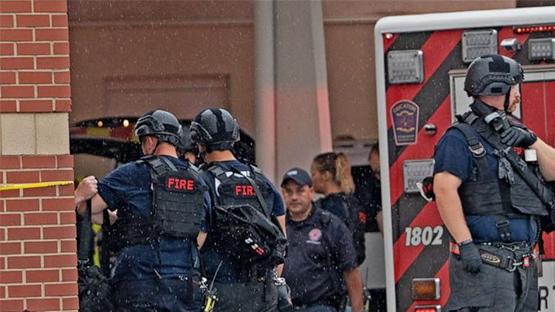 At least three people were killed and two others were injured in a shooting at an Indianapolis-area shopping mall on Sunday evening, police said.

Multiple people called 911 at around 6:05 p.m. local time to report an active shooter at the Greenwood Park Mall in Greenwood, Indiana, some 14 miles south of Indianapolis. An unidentified gunman had walked into the mall's food court and opened fire, according to Greenwood Police Chief Jim Ison.

Olivia Harding said she was at the Old Navy in the mall with her mom when they heard four gunshots and initially thought the nearby carousel was breaking down. But then they heard six more shots.

"I told my mom instantly to get down," Harding recalled in an interview with ABC News on Sunday night.

A person who was lawfully armed -- identified as a 22-year-old man from Bartholomew County -- shot and killed the gunman, according to Ison.

"The real hero of the day is the citizen that was lawfully carrying a firearm in that food court and was able to stop that shooter almost as soon as he began," Ison told reporters during a press conference on Sunday night.

Greenwood Mayor Mark Myers also confirmed that the suspect was "shot by an armed individual," whom he called a "good Samaritan."

"This person saved lives tonight," Myers said in a statement late Sunday. "On behalf of the City of Greenwood, I am grateful for his quick action and heroism in this situation."

Click here to read more at the original source.