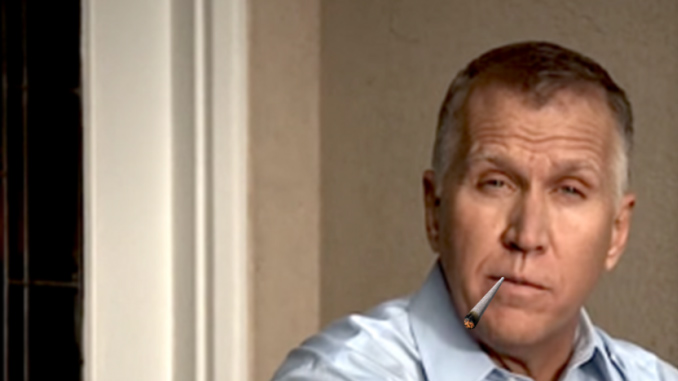 Sen. Thom Tillis voted "no" on the PACT Act Tuesday and then claims the reason he did was because he did not think the VA was prepared to implement the bill.  Would someone please tell Tillis that if he is honest he would have voted "yes" and then focused on getting the mess at the VA cleaned up.  We don't think Congress is prepared to do its job either but Tillis and the rest of them will still get paid this month.

Here's the backstory from WHQR:

The U.S. Senate gave final approval Tuesday to a bill that aims to enhance health care and disability benefits for millions of veterans exposed to toxic burn pits while serving abroad. Veterans do not have to prove their exposure to these burn pits before getting access to care.

The military used burn pits to dispose of chemicals, plastics and other waste. The measure should make it easier for former service members to get medical care through the Department of Veterans Affairs.

North Carolina's two Republican senators split their votes on the bill to help veterans, with Richard Burr voting in favor of it, while Thom Tillis was one of 11 Republican senators to vote against it. Tillis said that veterans should have the option to go outside the VA for care.

"We need to provide the option of community care, so if someone does have a toxic exposure and they are covered under this policy then they can get to the doctor they want as quickly as possible,” Tillis said in a recorded video statement.

Tills says the bill has good intentions. But he has concerns about the ability of the Department of Veterans Affairs to carry them out.

“I'm concerned that the VA is simply not prepared to absorb the number of claims and to provide timely care,” Tillis said.

Senator Thom Tillis on his vote against the PACT Act #ncpol @wsoctv pic.twitter.com/XJCGEjINPd

The final bill includes provisions sponsored by Tillis that would help veterans exposed to toxic chemicals in water at North Carolina’s Camp Lejune. Because of the bill, those veterans who were exposed can now sue the federal government.

“Congress has an obligation to ensure the VA can effectively and efficiently implement any comprehensive toxic exposure legislation and, unfortunately, I continue to have reservations about the Department’s ability to do so,” Tillis said a statement.

The bill now goes to President Joe Biden's desk, and he says he is looking forward to signing it into law so those veterans "finally get the benefits and comprehensive health care they earned and deserve.” Biden described the legislation as the biggest expansion of benefits for service-connected health issues in 30 years and the largest single bill ever to address exposure to burn pits.

The Senate had overwhelmingly approved the legislation once before, but the process briefly derailed last week when Republicans made a late attempt to change the bill. The GOP objections delayed final passage, infuriating veterans groups and advocates, including comedian Jon Stewart.

A group of veterans and their families have been camping out at the Capitol since that vote. They had endured thunderstorms and Washington's notorious summer humidity, but they were in the galleries as senators cast their votes.

Aside from Tillis, the other 10 Republicans who voted against the measure were Mitt Romney of Utah, Rand Paul of Kentucky, Mike Crapo of Idaho, James Lankford of Oklahoma, Mike Lee of Utah, Cynthia Lummis of Wyoming, James Risch of Idaho, Richard Shelby of Alabama, Pat Toomey of Pennsylvania and Tommy Tuberville of Alabama.