By the time this brief is published, Hurricane Ian will have made landfall somewhere on the west coast of Florida. So one of the great questions about Ian's track will have been answered. Forecasters have been very unsure over what Ian would do afterwards. The "cone of uncertainty" reflecting various forecast tracks ranged from the storm staying inland and tracking north (affecting, among others, the mountains of North Carolina) or crossing the Florida peninsula and entering the Atlantic basin, where it could reform as a hurricane and make a second landfall, possibly even impacting the North Carolina coast (although South Carolina or Georgia seem more likely). 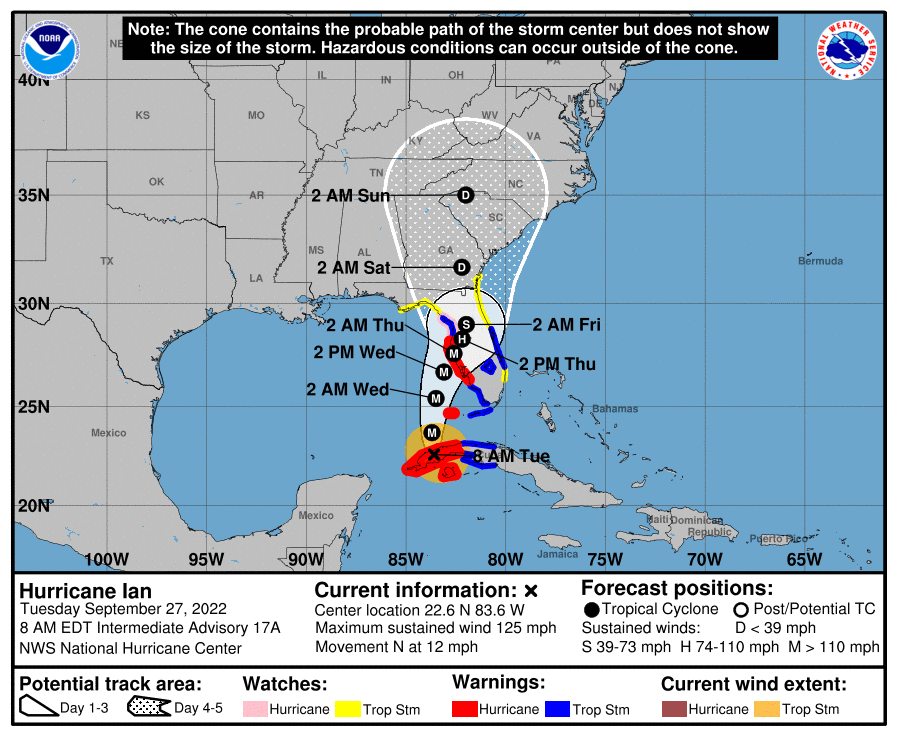 While a second landfall would be unusual, it is far from unusual for a hurricane to come within 50 nautical miles of either Florida or North Carolina. The National Hurricane Center (NHC) uses a metric of "hurricane return periods," which is a measure of how often a particular location is subject to a hurricane within 50 nautical miles, and Florida and North Carolina have the highest return periods along the Atlantic Coast.

As shown by the following charts from the NHC, the waters off the coast of North Carolina are frequently revisited by hurricanes - more so than anywhere else in the nation except south Florida. North Carolina sees return periods of hurricanes at 5-7 years.

What that means is that, in a century, those areas off the coast of North Carolina identified by the NHC could expect to see 14-20 hurricanes.

Estimated return period in years for hurricanes passing within 50 nautical miles of various locations on the U.S. coast 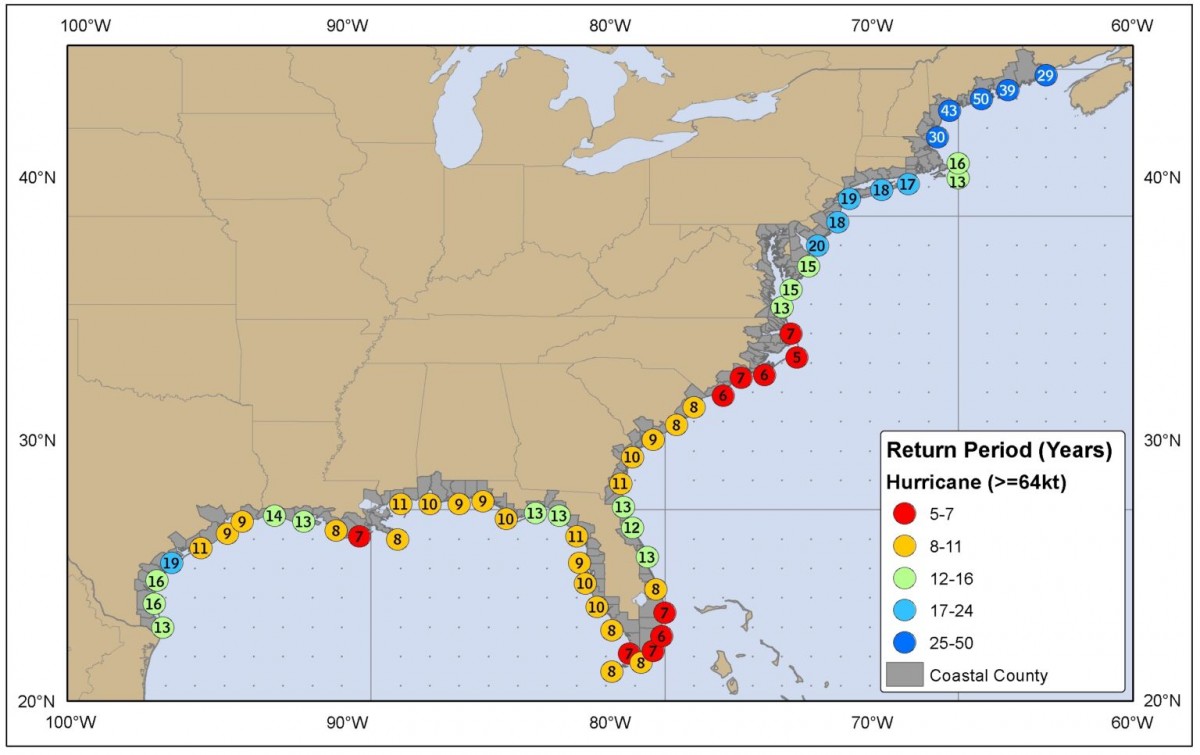 It follows, then, that the waters off the coast of North Carolina are also frequently revisited by major hurricanes (Category 3 or higher on the Saffir-Simpson scale). Those return periods for specific areas off the coast of North Carolina are at 16-25 years (or 4-6 major hurricanes in a century). Again, those are the greatest frequencies along the Atlantic and Gulf coasts, rivaled only by the southern tip of Florida.

Estimated return periods in years for major hurricanes passing within 50 nautical miles of various locations on the U.S. Coast 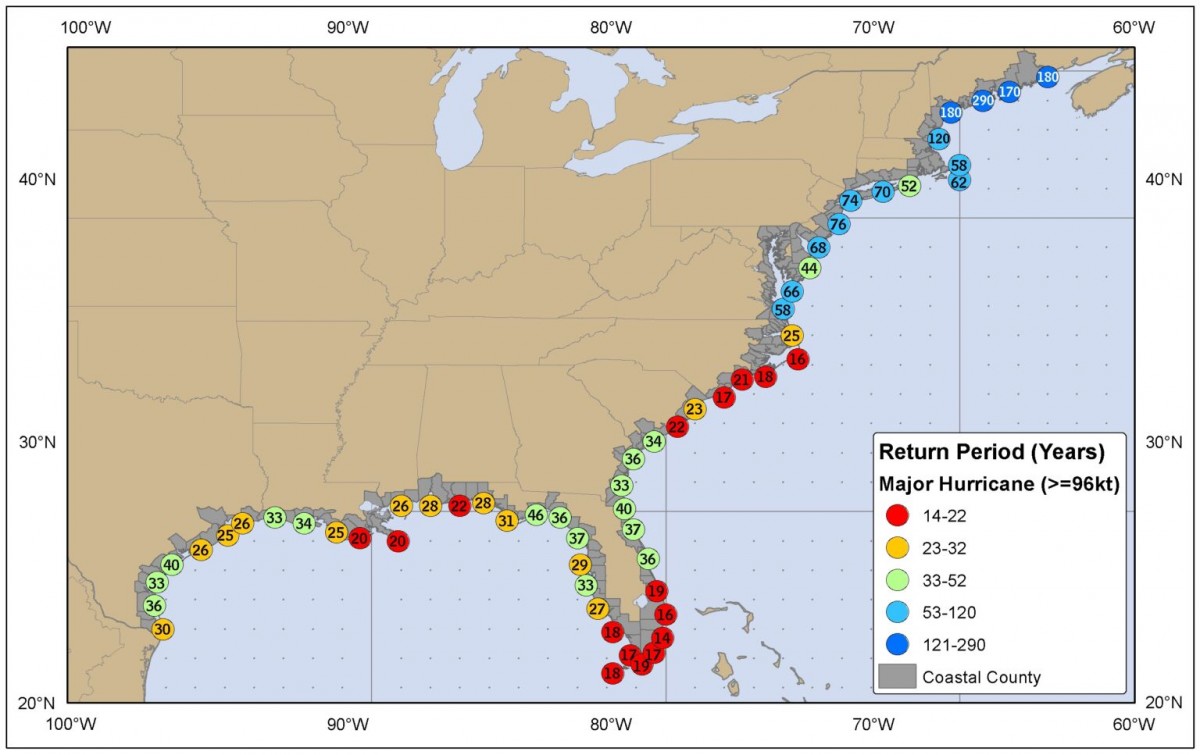 What happens to large wind turbines in hurricane-prone waters?

This discussion might be merely interesting from a meteorological standpoint were it not for efforts by Pres. Joe Biden, Gov. Roy Cooper, and the Duke Energy Carolinas Carbon Plan to put very expensive electricity generation out in North Carolina's hurricane-prone waters. Large arrays of offshore wind turbines would be at the mercy of such storms, but how they would be affected is critically unstudied. Offshore wind arrays in Northern Europe face no hurricane threat.

The issues are not merely whether a turbine can withstand the sustained wind speeds of a rated storm. Those will be less than the wind gusts (bursts of wind of short duration) that can be encountered within such a storm. Another problem is how winds act within such systems from the surface level to hundreds and hundreds of feet higher. Then there is the problem of these intense winds rapidly changing direction, beyond the capabilities of wind turbines to yaw (slowly shift in the direction of the wind).

A 2017 study in Geophysical Research Letters warned that "Gusts and shear within hurricane eyewalls can exceed offshore wind turbine design standards." Researchers found, among other things, that "Turbine design criteria outlined by the International Electrotechnical Commission do not encompass the extreme wind speeds and directional shifts of hurricanes stronger than category 2" and that "shifts in wind direction suggest that turbines must rotate or yaw faster than current practice."

The researchers specifically mentioned North Carolina in their introductory paragraph as a cautionary tale: "According to the National Hurricane Center, a return period of a major hurricane ... is as short as 16 years along the North Carolina coast. Three second gusts exceeding this wind speed threshold can occur even more frequently." (Citations omitted.)

A 2020 study in Wind Energy Science noted that hurricane wind simulations in turbine design failed to account for "very high gust factors (>1.7), rapid direction changes (30∘ in 30s), and substantial veer" expected from hurricanes. Turbine destruction could be the result of such unanticipated structural loads. As the researchers put it, "these features of hurricane wind fields can lead to loads that are substantially in excess of those that would be predicted if wind fields with equally high mean wind speeds but without the associated direction change and veer were used in the analysis."

Research published in Proceedings of the National Academy of Sciences in 2012 sought to quantify the risk of turbine failure in hurricanes. Their main finding was this: "In the most vulnerable areas now being actively considered by developers, nearly half the turbines in a farm are likely to be destroyed in a 20-y[ear] period." Those researchers offered "reasonable mitigation measures" that included designing the turbines to withstand higher winds and being able to turn with rapidly changing winds, but also building offshore wind facilities in areas with lower risk. The study showed North Carolina to be high-risk. 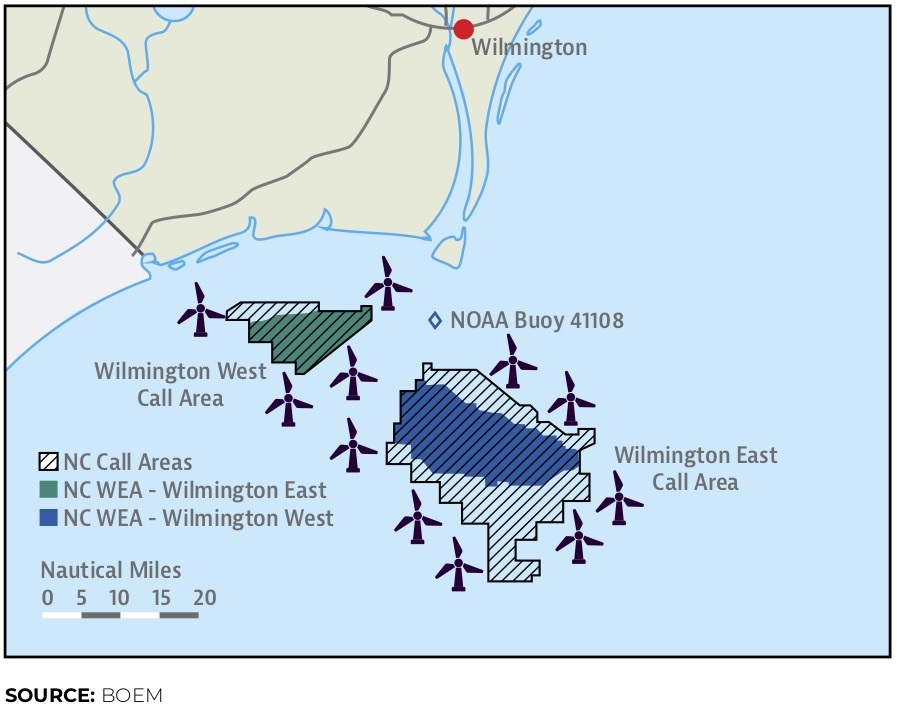 Furthermore, the individual wind turbines that will be spread out across that area are very tall. As discussed in the Locke Foundation's Center for Food, Power, and Light report on offshore wind, "Big Blow," turbines currently under consideration for Wilmington East would be 850 feet tall. Turbines under consideration for the Kitty Hawk wind energy area are now 1,042 feet tall, and it would not be surprising if Wilmington East developers switched to the taller units. By way of comparison, the tallest building in North Carolina - the Bank of America Corporate Center in Charlotte - is 871 feet tall.

At just 15 nautical miles from shore, the ugliness and unsightliness of an area over three times the City of Wilmington filled with tower after tower as tall as the state's tallest building, if not 150 feet taller than it, is unpleasant to imagine. But what impacts would it face from repeated encounters with hurricanes and major hurricanes?

And by extension, what effects would electricity consumers face from the outcomes of those encounters?
Go Back