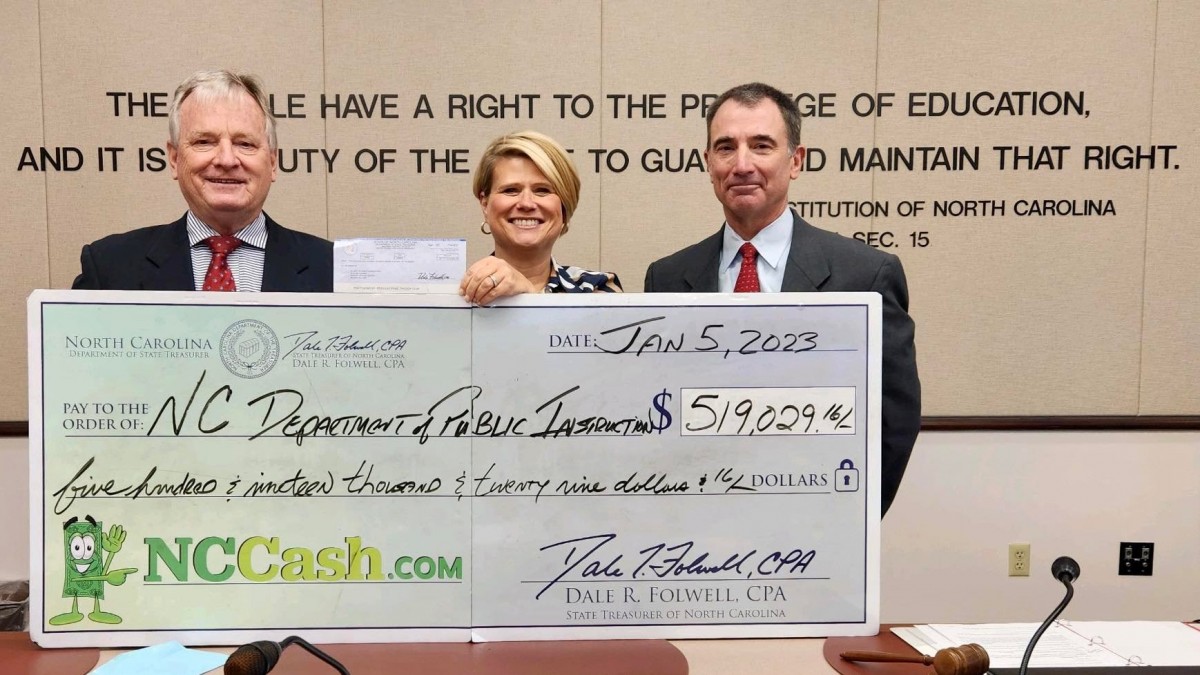 
(Raleigh, N.C.)     State Treasurer Dale R. Folwell, CPA, a staunch advocate of public education who strongly supports the work of classroom teachers, showed up at the State Board of Education (SBE) meeting today with a check for the Department of Public Instruction exceeding a half-million dollars in misdirected funds that were placed with the Department of State Treasurer (DST) for safekeeping.

The money resulted from shares of stock issued in the name of "Department of Education State of North Carolina" based on a Prudential Financial group life insurance plan that SBE held at some point. Upon the shares and accrued dividends being deemed unclaimed and held by Prudential for the required holding period, the property was placed with DST's Unclaimed Property Division (UPD), commonly called NCCash.com.

"At a time when so many schools are in need of money and resources, especially in rural and inner-city districts, every penny found to further North Carolina's educational mission is a blessing," said Treasurer Folwell. "I see that need not only as a member of SBE, but as chairman of the Local Government Commission, which reviews and approves financing for school projects throughout North Carolina."

"As keeper of the public purse, a North Carolina taxpayer and a believer in the power of education to change a person's trajectory in life to achieve upward mobility and the joy of achievement, I am honored to return this money to its rightful owners so that it can be put to use where it's most needed," Treasurer Folwell said.

The money originated from a process called demutualization. That occurs when a private business, owned by its members, such as a mutual life insurance company, changes its structure to a public-traded company owned by stockholders.

Prudential went through that transition in 2001, and policy holders at the time became shareholders, with or without the policy holder's knowledge. Prudential Financial shares were issued in the name and address on file for the policy. Any correspondences related to the shares were being sent to a previous address of SBE. In 2012, the shares and any accrued unclaimed dividends were deemed unclaimed and subsequently reported to DST in October 2015 after the required three-year dormancy holding period. During a recent review of data in the system, UPD staff identified these funds.

UPD paid 178,857 claims amounting to more than $105 million during the 2022 fiscal year that ended June 30. Both numbers were historical records. The returns are on pace to set another record this fiscal year. Through Nov. 30, UPD has paid 74,979 claims totaling just over $44 million from NCCash. Part of that total has been disbursed through the NCCash Match program, a no-hassle, expedited system that eliminated paperwork processing. As of Nov. 30, DST paid 44,200 Cash Match claims totaling nearly $12.6 million.

Under state law, UPD receives and safeguards funds that are escheated, or turned over, to DST. The unclaimed property consists of bank accounts, wages, utility deposits, insurance policy proceeds, stocks, bonds and contents of safe deposit boxes that have been abandoned.

Unclaimed property can result from a person or entity forgetting they are due money, or from a move of location and forgetting to provide a new address. It also could result from a typing error in a house number or zip code in an address, a name change, or data loss from a business converting its computer system. As society becomes more mobile and steadily moves to electronic transactions, the risk of having unclaimed property has increased.

More information, including how to find out if you are owed money, can be found at https://www.nccash.com/.