NAACP going after NC-based anti-vote fraud group | Beaufort County Now | Boy, how things change. One of the missions of the NAACP's founders was to protect the integrity of elections and people's right to vote.

Login to Send a Private Message to Brant Clifton
Publisher's note: Brant Clifton uses the words of others, in part, to keep the spotlight on shenanigans of Bill Barber and his followers in his "bare knuckles" Conservative online publication known as The Daily Haymaker. 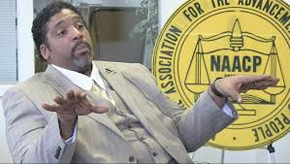 Bill Barber: Above.
Boy, how things change. One of the missions of the NAACP's founders was to protect the integrity of elections and people's right to vote. In 2014, the civil rights group is gunning for the Raleigh-based Voter Integrity Project. Jay DeLancy, VIP's executive director, is not exactly tucking tail and getting all submissive:

Christmas was postponed indefinitely last month for the Voter Integrity Project after the NAACP served an expansive subpoena for the records of VIP on Friday, December 20, 2013.

"We won't take this bullying lightly, but do marvel at their hypocrisy," said Jay DeLancy, Chief Executive of the Voter Integrity Project-NC. "It looks like they're employing the same tactics against us that bigoted Governors once used when trying to run the NAACP out of the South."

During America's civil rights era, several Governors and Attorney Generals attempted to destroy the NAACP by demanding their membership records and then punishing their supporters.

"The Supreme Court banned the practice in 1964's NAACP v. Alabama decision," he said, "but today, the NAACP are trying to use that tactic against us  -  private citizens who worry about election integrity."

Civil rights groups like the NAACP rose to prominence in the 1950s and 1960s, among other things, by fighting state and local laws in the South that were intended to prevent black people from voting. [...]

Among their demands, the NAACP subpoena (shown by clicking here) seeks, "all documents and communications received or created by the Voter Integrity Project that reflect or discuss the rationale or purpose for enacting any provision in H.B. 589."

"In order to win, they need evidence of racism from anybody who supports honest elections," he said, "but they also want to analyze all of our un-redacted private communication for other purposes too."

"Because of our political views, we are being forced either to publicly release enough information to destroy the lives of anybody who ever helped us," DeLancy said, "or to spend tens of thousands of dollars, that we don't have, in order to defend our Constitutional right to free speech."

VIP-NC is part of a nationwide movement that views "fraud friendly" election laws and lax security of the ballot box as the latest version of the civil rights battles from the middle of last century.

"Modern NAACP leadership brings a new meaning to the term, 'freedom fighter,' by their bizarre opposition to open and honest elections," said DeLancy. "Today, William Barber stands on the wrong side of history, locking arms with lynch mobs and leaders like Lester Maddox, Bull Connor and George Wallace."

I wonder if the same liberals bent out of shape about Civitas seeking records from UNC professors will get fired up about this. (VIP is a completely private organization. No government money involved. We can't say that about the University of North Carolina.)
Go Back