It's always charming when two geriatric liberals attend the same event and come away with two very different accounts. Exhibit One: The N&O's Rob Christensen — the man who managed to miss the blonde with John Edwards, Jesse Helms publicly calling out then-congressman Charlie Rose, and Dennis Wicker ordering from Domino's at a black-tie event — came away from Tuesday's televised extravaganza with this:

[...] State House Speaker Thom Tillis, who has been leading in the polls and in fundraising, emerged from the debate largely unscathed [...]

The winner by default was Tillis, who had the most to risk because he has an extensive public record to defend and only rarely did he have to do so.[...]

The two Republicans dominated the debate with their back-and-forth as Mark Harris and Heather Grant sought to remain largely above the fray. [...]

Far too often, these televised debates feature local drive-bys asking asinine questions and the candidates being limited to 20 seconds or so to respond. Guns for mentally ill people? Who's FOR that? 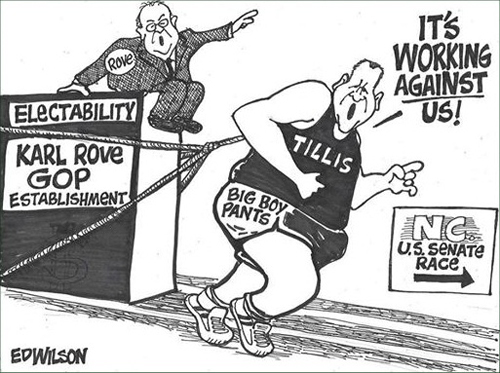 The recent highly-publicized mass shootings were committed by mentally-ill people who had never been in trouble with the law before. Federal privacy laws regarding medical care are arguably more draconian than the rules affecting national security information. If you have had no problems with law enforcement — and are not clearly under the influence of alcohol and drugs — there really is no justifiable reason for barring someone from purchasing a firearm.

Do people honestly want the clerk at the Wal-Mart ammo counter or that guy at the gun shop to have the final say as to whether you are mentally stable? For people without medical degrees, mental illness is often in the eye of the beholder. Does a ten year old prescription for anti-depressants bar you from buying a gun? Maybe you took them to get over a traumatic life episode (death of loved one, divorce, job loss, etc.).

This question is obviously too complex to properly address in twenty seconds.

ObamaCare and the economy are THE top two issues on voters' minds. Those two issues are also way too complex to adequately address in twenty seconds. Or even a minute.

Time Warner depends on state government to protect its monopoly. So, their news division is not likely to do anything to displease the powers-that-be (Tillis) on Jones Street. Tillis — in his role as speaker — can severely restrict McClatchy's access to the legislative complex. So, we got an end-product that allowed the debate sponsors to protect their interests, gave the drive-bys cover to claim they were living up to their First Amendment responsibilities, and allowed the candidates to test-drive packaged sound bites to a TV audience. So, the drive-bys and the campaigns won. The voters gained little to nothing.
Go Back