Dueling Hits - The Kingston Trio - 1957-1967 | Beaufort County Now | Three college boys who just enjoyed singing together turned the world on to folk music, but they never considered themselves as fold singers. They were just entertainers singing at colleges.

Login to Send a Private Message to Bobby Tony
Publisher's note: I have initiated this new segment on BCN, where I determine the Best Music Ever ... and, 'with a little help from my friends'. I do this from my opinion, for what that is worth, where I will measure the best music that I am familiar with.

As previously mentioned, there will be others who share their favorites with our BCN readers, in particular here, Bobby Tony.

Three college boys who just enjoyed singing together turned the world on to folk music, but they never considered themselves as folk singers. They were just entertainers singing at colleges.

The two things that came together at the same time was my trying to learn guitar and The Kingston Trio producing records that were simple to play. At one time I had every LP album they made, now I have every CD and a complete ITunes catalog of their music.

Even thought they were huge for a few years, the British invasion in 1964 pretty much put an end to their run as top tier entertainers. Picking a couple of songs from this group has been most difficult but I chose the ones that seemed to fit the era and the ones that our loosely formed folk group sang back in the day.

Here we were before the Air Force, Army and Navy split our group up in 1967. The Kingston Trio still performs around the country, Nick Reynolds, Dave Guard, John Stewart have all passed and Bob Shane has retired but retains the rights to the name. I continued to follow John Stewart's solo career until he pass in 2008. 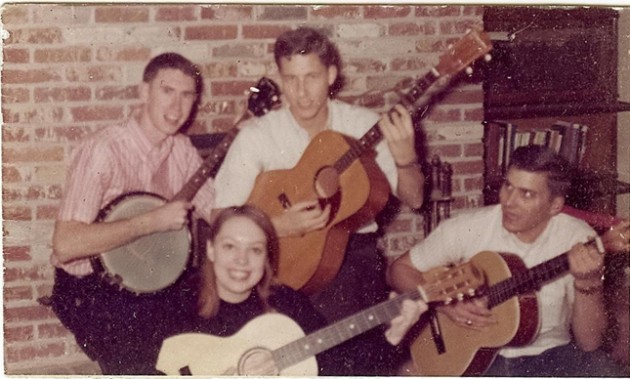 
Here is Yellow is the Color of my true loves hair:

You might be surprised to learn that we sang this song in Dau Tieng base camp in 1968. We then saddled up and got down to business. No one hates war any more than those who have to fight it. This is the studio version, which I think is one of the better renditions.