Published: Tuesday, October 11th, 2016 @ 3:34 pm
By: Jim Kouri   ( More Entries )
Many intelligence and law enforcement officers were interested in hearing about the details of the FBI's Hillary Clinton investigation especially the allegations of crimes committed by her and her staff. However, they were destined to be disappointed by one of the nation's most honored cops: James Comey.

For example, the investigation into the weapons transactions in Benghazi, Libya, by a secret Central Intelligence Agency operation linked to the Battle of Benghazi and the deaths of four Americans, including Amb. Chris Stevens, was a primary concern for national security professionals who are weary of political-hack appointees - who are big on politics but lacking in real world experience - calling the shots in law enforcement.

Unfortunately, like many American civilians, the men and women of the nation's intelligence and law enforcement communities were shocked to hear that there would be no charges pressed against Hillary Clinton, Cheryl Mills, Huma Abedin or anyone else involved in Clinton's shenanigans.

A large part of the Battle of Benghazi and the Clinton scandal was the CIA gun-running operation that’s being kept from the public by Obama and the Justice Department.

Even FBI agents told their colleagues in other law enforcement and intelligence agencies that they believe their once-iconic agency has turned into a political tool for whomever sits in the Oval Office or rises to power in the Democratic National Committee.

According to government documents released by a Washington, D.C., watchdog group, then Secretary of State Hillary Clinton and her boss President Barack Obama sanctioned a secret CIA operation to arm and train questionable members of the Syrian rebel groups, some believed to be Islamic State of Iran and Syria (ISIS) fighters.

Besides secret meetings between Attorney General Loretta Lynch and Bill Clinton, there is now other accusations of improper actions by FBI investigators and the shocking rationale by the Director of the FBI, James Comey, that allowed Clinton to escape prosecution. What surprised many was the FBI admitting that they gave witnesses immunity instead of subpoenas and destroyed their laptops rather than reveal their contents.

"One of my colleagues actually told me the Clinton assistants were given immunity and then evidence they possessed was destroyed. Then [Director Comey] told lawmakers under oath that there was no evidence involved. Which begs the question: If there was no evidence involved, why were these political hacks given immunity in exchange for nothing? And then there's the question of why were two laptops destroyed that were seen only by Clinton's staff and Comey's selected agents?" asked a former police detective lieutenant, Lawrence Fenway, who attended the FBI National Academy in the 1980s.

Other FBI agents have privately complained to their colleagues in other law enforcement departments and intelligence agencies that their reputation as an honest, nonpartisan criminal investigation department has been significantly damaged thanks to Comey's obvious politically-motivated decisions. There are even agents alleging evidence tampering.

Within the 189 pages of largely redacted FBI interviews of individuals from the Hillary Clinton email investigation, something that wasn't known before about two missing boxes containing the former secretary of state's emails became another questionable action by the Clinton team and the FBI investigators.

The interviews released earlier this month also reveal the allegation that senior State Department official Patrick Kennedy applied pressure to subordinates to change the classified email codes so they would be shielded from Congress and the public, a criminal act. 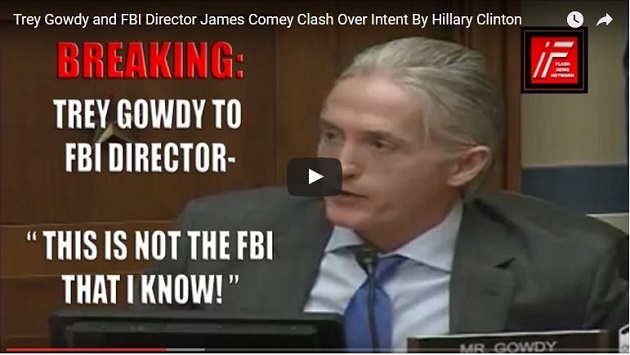 FBI agents have told colleagues such as local cops that they believe FBI Director Comey has permanently damaged the bureau's reputation for "uncompromising investigations with his cowardly whitewash of former Secretary of State Hillary Clinton's mishandling of classified information using an unauthorized private email server."

FBI agents say Comey handcuffed the investigators' by subjecting them to follow ridiculous rules and to the demands by the lawyers for Clinton and her aides that limited the FBI's investigation. "In my 25 years with the bureau, I never had any ground rules in my interviews," retired special agent Dennis V. Hughes, the first chief of the FBI's computer investigations unit, told Fox News. "Among their many concerns is the way that Hillary herself was given undoubtedly preferred and special treatment," he added during his interview.

The New York Post and Fox News Channel both reported that: Former FBI official I.C. Smith knows a thing or two about Clinton corruption. After working at FBI headquarters as a section chief in the National Security Division, he retired as special agent in charge of the Little Rock, Ark., field office, where he investigated top Clinton fundraisers for public corruption and even Chinese espionage. "FBI agents upset with Comey's decision have every reason to feel that way," Smith said. "Clearly there was a different standard applied to Clinton."