A family history of our Musical Instruments | Eastern North Carolina Now | The fact is that music has always been a major part of my family since I was born. My dad was a self taught musician. We always had instruments around the house.

A family history of our Musical Instruments

Login to Send a Private Message to Bobby Tony
I have made several post about my lack of musical talent despite the fact that I have always loved music and have played the guitar off and on since I was a small boy. Somewhere in my mid-thirties I gave it up and never picked up a guitar again until after I retired for the second time in 2012.

The fact is that music has always been a major part of my family since I was born. My dad was a self taught musician. We always had instruments around the house. Our house on Sterling street was a three bedroom one bath Craftsman house. The front bedroom was designated as the music room until my brother demanded a room of his own. Up until that time he and I slept in twin beds in the middle bedroom. Jim is five years older than me so you can imagine the sibling rivalry. It was not so mush a rivalry as a crusade by him to see just how miserable he could make my life.

The front Music room had a piano, accordion, a full size xylophone, as well as an antique organ that dad had piked up and restored. It was a pedal organ that required you to pump with you feet to get the air flowing. By the time I was five years old my brother had already been taking piano lessons for five years. He continued to take lessons for a total of thirteen years.

My dad never had a music lesson in his life but he was a gifted musician. In fact he courted my mother with a Gibson Mandolin before they got married. That would have been in the late 1920s as they were married in 1932. Their song was "Love Letters in the Sand." My dad had a great Irish tenor voice ( yes he was a red headed, freckled faced, hot tempered Irishman) which he must have used to great effect in his earlier dating days. When Pat Boone released his version of "Love Letters", in 1957, my mom ( a devout christian, prudish strait laced 1st generation Italian) said Pat reminded her of dad. Then she added, they are so much different.  Pat was a straight laced, christian, boy who was wholesome, while my dad..... Well let's just say was not. 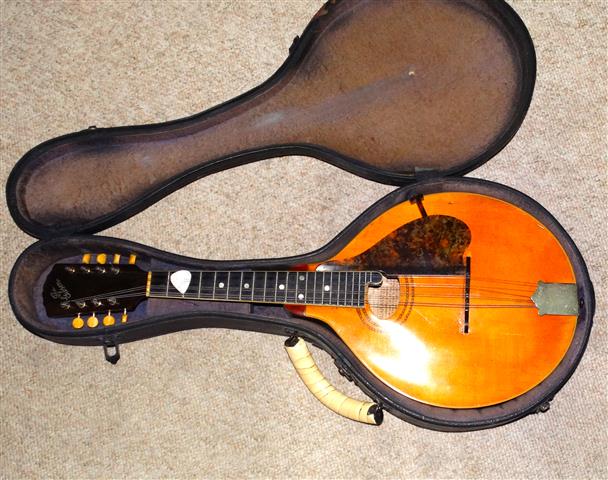 This is the oldest in our inventory, The Gibson Mandolin at least 90 years old.

Mom loved the Lawrence Welk show and when dad ran across an almost new accordion he bought it immediately and learned to play it. He would stand in front of the mirror for house practicing. For those who don't know about an accordion, the right hand is pretty much like a piano while the left had side has about a million little black buttons that create the base notes. The only thing I know about the accordion is that middle C is a black indented note. That is how the player could orient his left hand on the keys. My Italian uncles loved to sing the Italian songs and dad dutifully learned them all including the Italian words. See that post here.

My interest in music was muted to say the least. I was forced to take piano lessons but after one year, I just put my six year old foot down and refused to continue. I still do not know if it was my forcefulness or my parents realization that I just did not have the talent of my older brother. In any event I was allowed to quit taking piano lessons (one of the few things I was ever allowed to quit - that was just not in their parenting book).

By 1957 Jim was in a rock and roll band and in college. When the Kingston Trio came out with Tom Dooley, I took a renewed interest in music. Jim played both the Tenor (four String) guitar as well as six string. I began to learn the Kingston Trio songs on his Stella four string guitar. At one time I think I knew every song the Kingston Trio recorded. We also had a small folk group in my high school years. Jim used the music to get girls, and naturally I tried to follow his lead. But there is something distinctly unromantic about singing Tom Dooley to a girl that just does not compare to Great Balls of Fire. My Brother and Jerry Lee Lewis

One of my most consistent faults, is a lack of patience.I have persistance but I quickly grow bored with things once the new has worn off. For most of my life I have rarely dedicated myself to any one endeavor for any length of time. I used to call it the "Renaissance Flaw". The flaw indicates a decided interest in many various subjects but not enough perseverance to become accomplished at any of them.Some psychologist call it a 'Monkey Mind', Jumping from branch to branch

Over the years I continued to have a on and off relationship with the guitar. I continued to play and learn songs, mostly folk or ballads, until my return from Vietnam. For a very short period, I expanded my Musical repertoire to "Eve of Destruction," "We gotta Get out of this place," and the ever popular Country Joe and the Fish- Vietnam song.  It might interest some to know that some of the most well liked songs by GI Grunts were anti war songs. "Where have all the flowers Gone" was often the sung back in base camp. It has been said that no one hates war more than those who have to fight them.Go Figure.

Along the way I owned a nice Gibson Hummingbird Flattop Acoustic (shown below), a Martin DB 28 Dreadnought, several Tenor four strings, a couple of banjos as well as one really nice 5-string banjo and multiple amplifiers, microphones and tape recorders. Like the dog with the bone in his mouth, I lost them all in pursuit of my next adventure based on the reflection I thought I saw in the pond. As I have aged, I have come to the conclusion that when you are living life to the fullest you don't worry about making memories or saving artifacts, you are too busy living large. It is only when you get a bit of salt and pepper in your hair that you look back and think about all the sand that passed through your fingers both in instruments, people and family.

Dad and Jim had a musical rapport that I never had with dad but that is a story for another chapter. When I got my first Video recorder in 1980, I recorded them playing and singing. By that time my dad was 68 years old and his arthritic fingers were not quite up to his standards, but he continued to play until his hands no longer hold a cup much less play an instrument.

I have uploaded a section of that video to my YouTube channel. Here is the link: Jim and Dad Playing the Guitars circa 1980

When dad passed in 2005, Jim inherited all the family instruments. This past Christmas I took some pictures of a few of them for the files and this edition of Grandpa Diaries. Most of the instruments are stored in one of Jim's extra bedrooms just like they were in 1955 at our house on Sterling. I guess that means there is some continuity still in the musical legacy of our family. Since there is no one in the next generation that has any real interest in musical instruments, I suspect that someone will find a "Barn Find" when Jim passes.

Here is a partial list of his current inventory most of which are in the collage: 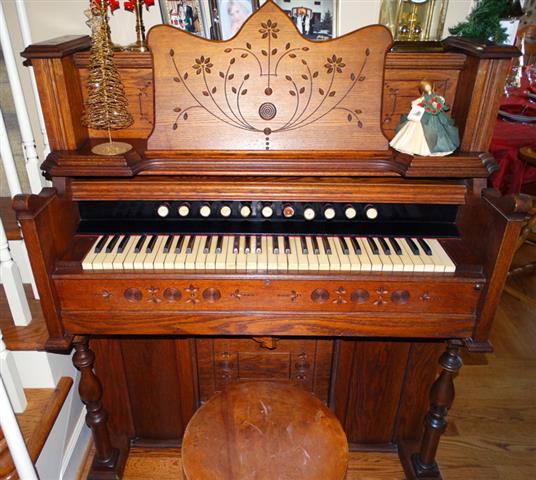 This organ was in the basement of a house that burned down. Dad brought it home in pieces and restored it. I still plays. You have to pump the pedals with your feet o get the air box to work. 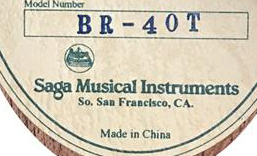 I regained an interest in Guitars and bought a Classical Yamaha C40 for about $150 new. I though it would help me keep my fingers and mind limber. After a 30 year absence from music, I found out that my lack of talent had not changed and my memory of chords was intact but most of the words to the old songs were somewhat garbled. Just last month, I was in an antique store near the house and they had a brand new Tenor Four String Blue Ridge Model BR-40T. I bought it immediately, just for old time sake. It was not until I got home that I noticed it was Made In China. But I must admit it has a nice sound.

Below is a collage of many of the instruments over the years with a green check on the ones still in Jim's inventory. My two newest additions are bottom right. 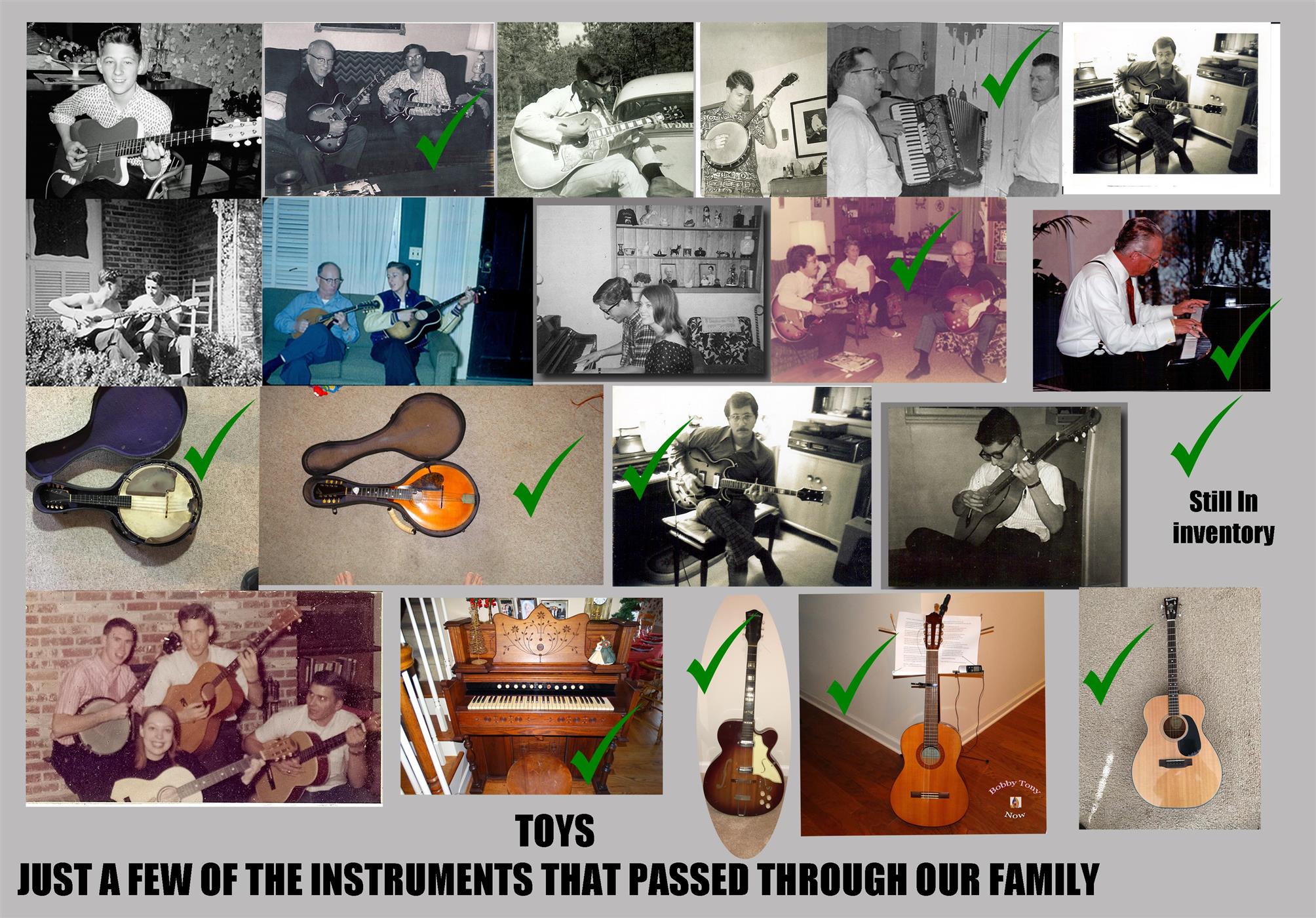