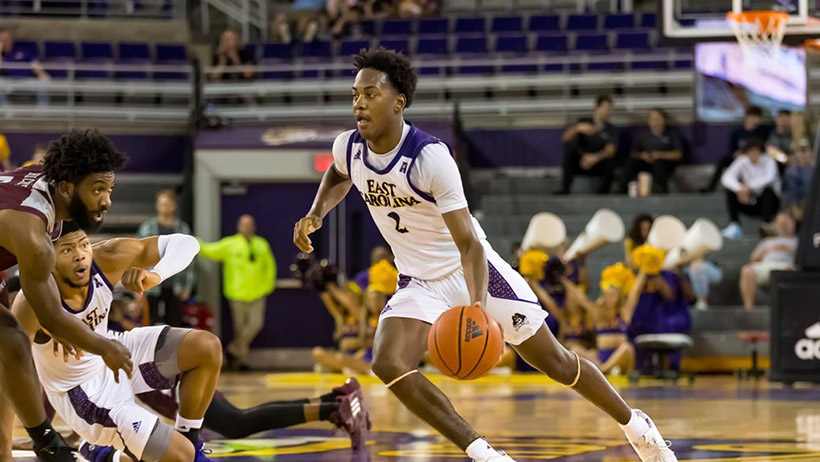 WICHITA, Kansas    After closing out their non-conference slate with four straight victories, East Carolina will open up its sixth season of American Athletic Conference play on New Year's Day at No. 24 Wichita State.

After beginning the season 2-7, the Pirates have rolled four consecutive wins to pull within a game of .500, largely due to its defense which has held each of its last four opponents under 40 percent shooting.

The Pirates have held three of their last four opponents under 70 points, while averaging 73.0 points per game during their current winning streak.

"The guys are playing with a little more confidence and that helps," ECU Head Coach Joe Dooley said. "The level of competition in practice the last three weeks has been a lot better. We've made some improvements. We still have a long way to go, but the last three weeks we've been gaining on them."

East Carolina enters fresh off an 82-74 victory over Eastern Kentucky on Saturday. The Pirates got 25 points and a season-high 14 rebounds from sophomore Jayden Gardner while producing their longest winning streak since they had two four-game runs in 2013-14.

Gardner is averaging 20.7 points and 9.2 rebounds per game, both team highs, and he is the first East Carolina player with five straight 20-point games since Maurice Kemp in the 2012-13 season.

Gardner along with freshmen Tristen Newton and Brandon Suggs have combined to account for 54 percent of the team's scoring this season, including 71 percent of all the Pirates' points over the last five games.

Juniors Tyrie Jackson and Tremont Robinson-White each scored double against Eastern Kentucky are averaging a combined 21.3 points per game as the starting backcourt since Robinson-White made his ECU debut on Nov. 30 after missing the first seven games due to injury.

"I'm excited," Dooley said. "It's a great atmosphere. It's a great test. People say it's a hard [conference] opener, and it is, but it's also a great barometer to see where you're going."

The Shockers (11-1) debuted at No. 24 in the Associated Press poll on Monday after winning five straight games which included victories over Oklahoma State, Oklahoma and VCU.

Opponents have experienced difficulty with the Shockers' physical defense, making just 38.1 percent from the field and only 32.4 percent of their 3-point attempts. They've also carved out a plus-7 advantage per game on the glass,

Reserve forward Grant Sherfield, who came off the bench and collected a season-high-tying 15 points plus a season-best 11 rebounds in 25 minutes, led the Shockers to an 84-66 win over Abilene Christian Sunday. Sherfield, who shot 6 of 6 from the field, is one of eight Wichita State players averaging at least 6.3 points per game.

Stevenson has connected on 33.8 percent of the 65 3-pointers he's attempted and has made 12 of 27 over the last five games.

Wichita State ranks second in The American an average of 77.3 points per game. The Shockers have averaged 82.4 per game over their five-game winning streak.

KenPom ranks WSU (17th) and ECU (22nd) as two of the nation's least experienced teams in terms of minutes/class makeup. The Pirates' roster doesn't include any seniors and the Shockers have just one, Echenique.

This will be the teams' fifth meeting since Wichita State joined the American before the 2017-18 season. The Shockers have won the first four by an average of 21 points per game, including a 73-57 decision last year in the conference tournament at Memphis, Tenn.