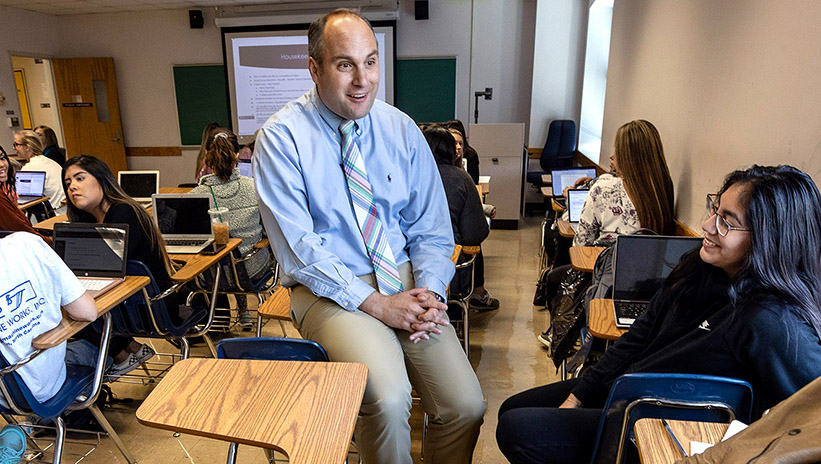 Butterflies in your stomach, a knock on the door, an awkward moment meeting your parents or roommate and then one of the most terrifying and exciting moments of dating - the first date.

According to East Carolina University associate professor Dr. Damon Rappleyea, these moments still happen but the way young adults find one another in 2020 and the process of dating is very different than their parents' generation.

LOVE AND DIGITAL MEDIA
According to Rappleyea, there is not a consistent right or wrong across the board when it comes to having a relationship and using digital media. He said it’s different for everyone but that if you keep these three things in mind, it’s a good start toward a healthy relationship:

1. Set boundaries about who and about what you’re willing to talk about.

3. Above all, just be kind. We have to have some level of being kind. If someone is not being kind to you, it’s a good sign to get out of that relationship.

If you or someone you know is in an abusive relationship, please visit ECU Cares for a list of resources.
Today, dating apps like Tinder and Plenty of Fish and social media sites make it easy for people to connect digitally, often messaging one another for days or weeks before meeting in person. Twenty years ago, it may have taken three to four dates to discover details like a person's likes or dislikes, family and work details - today, it's all available in a digital profile.

Rappleyea, the director of ECU's Marriage and Family Therapy program, says that personal and even intimate details play out digitally first through messaging. The typical buildup to intimate expressions doesn't take place as often because of the anonymity and ease of digital media.

"You often hear alcohol referred to as liquid courage, I would almost say there is something about this, like digital courage, where we say and do things we just wouldn't ordinarily do to somebody," he said.

ECU junior Katie Collins said the element of getting to know basic information about a person is out of the equation in today's dating culture. The result is that young adults jumping to share personal details usually reserved for close friends or family during early conversations, sometimes before they meet in person.

"Digital media quickens up a relationship," said Rappleyea. "It's one of those things that teens are often called to navigate before they actually have the skills to do so. We're talking a lot about how men and women negotiate the details of intimacy." Rappleyea. He wrote a paper on acceptable dating events and behaviors that was published in 2016 and continues to keep up with trends as they evolve.

Because of the speedy start to dating using digital media, the process of building trust, and feeling safe and secure in the relationship is often disjointed. He says it's more likely people will have a negative experience in this type of dating culture that compromises their ability to be vulnerable in future relationships. Teens and young adults may have experiences where someone they barely know takes advantage of personal information they've shared.

"It sets a dangerous precedent for future relationships," said Rappleyea.

On the other hand, digital media allows us to connect and share in people's lives in a profoundly meaningful way, he said.

"If we do it right it's beautiful to be able to send your partner a quick pick-me-up, a quick text. 'Hey, thinking about you today. Good luck on your test,'" he said. "This digital way of being able to communicate instantly and being able to share things with people is really an advantage. It also has made long distance relationships a reality. I think sometimes that's a really good thing. There are still challenges. Lots of people who have really great relationships have met online."

Collins said she has tried dating apps in the past but had terrible matches and dates. She found the experiences awkward and even boring. She met her current partner in person through work.

"I know people who have amazing relationships and met through dating apps," she said. "The only thing that kept them apart was distance or time like they're on different class schedules so they wouldn't have run into each other, they would have never bumped into each other in the hallway."

Sophomore Trey "TJ" Joyner prefers meeting girls the old-fashioned way, through mutual friends. He said he likes to make an impression and get to know someone in person before going out with them, advice he took from his parents and grandparents.

"I've been on Tinder but mainly for fun, just to see who I match with. I've never actually gone out with someone from a dating app," he said.

According to Praise Taylor, an ECU sophomore, dating apps aren't the only way to meet people. She said some of her friends will "shoot the shot" or make the first move by direct messaging someone on social media.

Taylor, Collins and Joyner mentioned that the ease and accessibility of staying connected constantly increases the expectation of regular communication. Taylor said that texting makes it easier for busy college students to maintain a relationship but has to be managed carefully. 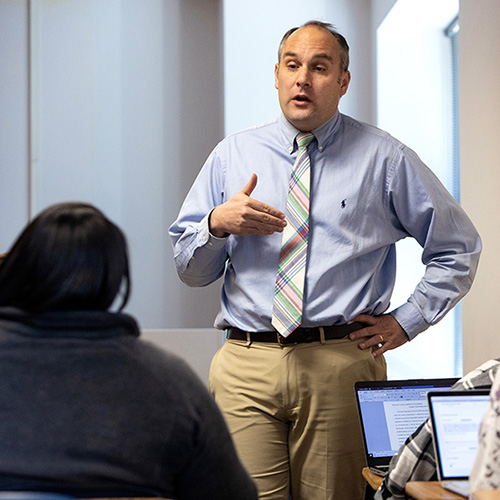 Rappleyea teaches during a Wednesday afternoon class.
"Sometimes people get repetitive and you have to watch out for stalking," she said.

The students say they have seen the pressure of this constantly connected dating culture on their friends, including worn down self-esteems, too much time chasing unrealistic expectations and becoming almost obsessed with the person they are dating.

"If someone doesn't respond to you immediately, because everyone has their phone on them all the time, you think 'oh, I said something wrong or this person's not interested in me anymore' and also there is this idea of dating always at your fingertips," said Collins.

Rapplayea also found that expectations for communication between two people in a new relationship can be very demanding.

The ability to text and call throughout the day makes it easy to share sweet messages but Rappleyea says it also makes it easy to lose our emotional independence, which is needed for a healthy relationship. The ability to communicate with your partner constantly can cause you to lean on them so much that you start to feel their emotions.

"Don't get me wrong, empathy is good in any relationship," he said. "But, if you're having a bad day because your partner is texting you about the conflict they're having with a co-worker or boss then I would say, that's a problem."

He says couples must stay emotionally strong as individuals to support themselves and one another when it's necessary.