Published: Tuesday, September 15th, 2020 @ 10:49 am
By: Carolina Journal   ( More Entries )
Publisher's Note: This post appears here courtesy of the Carolina Journal. The author of this post is Kari Travis. 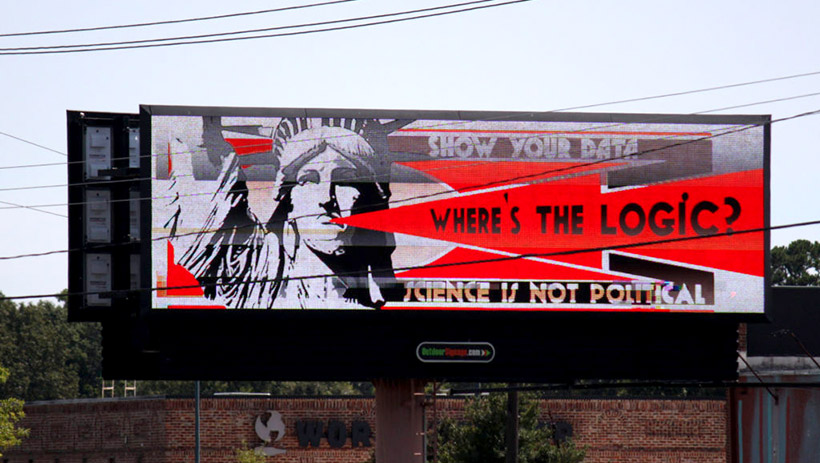 "Where's the logic?" Says one of the messages on the enormous roadside screen.

"Science is not political."

The campaign, Kotis told Carolina Journal, is about "pinning Cooper down on scientific reasoning," which the governor repeatedly claims is his basis for keeping bars, movie theaters, lounges, nightclubs, and other businesses closed. Cooper originally said bars and movie theaters would reopen as part of his Phase 2, but moved the dates, revised the phases, and prolonged certain types of business closures. Kotis owns several Greensboro restaurants, a brewery, and a movie theater. The theater remains closed under Cooper's revised Phase 2.5. Meanwhile, Kotis said, gyms, restaurants, churches, and bowling alleys have reopened. Even some casinos reopened in May.

The governor's logic doesn't make sense, Kotis said, and that's the whole point. With the help of some Soviet-inspired art, he crafted his messages and splashed them on screen for passersby to see. And ponder.

"Your governor is in control. Listen and comply." Another message reads.

"Well, no sh*t," Kotis told CJ. "But that doesn't explain gyms, restaurants, casinos, bowling alleys, churches — all being open, and not others?"

Kotis sits on the University of North Carolina's Board of Governors, where he's outspoken about the need for student safety and affordable education amid the pandemic. Most of his hospitality operations have been closed since March, he said in a recent Facebook post. He's installed foot-operated door pulls, sanitizing stations, UVC air filtration units, and other safety equipment. He's put staff testing and temperature checks in place.