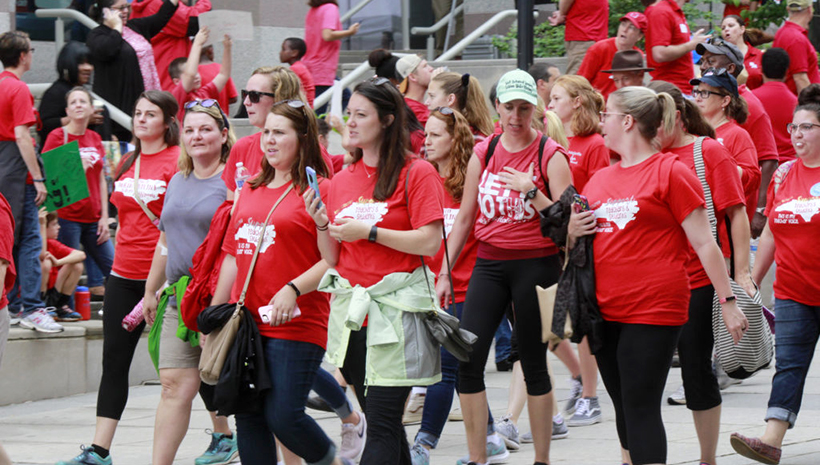 Taxpayers could pay an extra $1.32 billion if public employees win the ability to collectively bargain, says a report by the John Locke Foundation.

North Carolina has banned government employees from collective bargaining for 60 years. Repealing the prohibition would increase government spending by $889 million to $1.32 billion — creating a burden of up to $126.03 for each taxpayer in 2019, says the report.

"It would impede the economic recovery by making it more expensive to do business in North Carolina," Stoops said. "The cost of government would surge, and that increase would force elected officials to impose tax increases on all North Carolinians."

As a right to work state, North Carolina has the second lowest union rate in the nation, behind only South Carolina. Just 2.3% of workers were unionized in 2019, according to the U.S. Department of Labor's Bureau of Labor Statistics.

JLF researchers did the study to discover the economic costs of repealing the ban on public sector collective bargaining.

But unions are working to change that, and they have won some footholds in the state.

"It is a feedback loop. As lawmakers give benefits to organized labor, those unions increase donations to Democratic politicians," Stoops said. "It's beneficial for politicians and unions, but it actually does a great deal of harm to taxpayers."

The amount of harm will depend on the type of collective bargaining law, says the report. The weakest would cost almost $889 million. Allowing strikes would drive that number towards $1.12 billion. The strongest would cost at least $1.32 billion.

But even that estimate is low. It doesn't show the true cost of unionization, says Stoops.

The report doesn't count local spending, and so the actual bill for taxpayers will be higher than the report's estimates, Stoops said. The report warns that collective bargaining could trigger "massive property tax increases" at the local level.

Taxpayers can also count on paying more in the long term. The report calculates the cost of increased wages without weighing employee benefits. But more spending on retirement and health care benefits could create substantial costs, especially as retirees live longer, said Stoops.

"It will create a continuous drain on public resources," Stoops said. "It will break state and local budgets. Government at all levels will be unable to sustain the costs associated with higher wages and benefits."

If the General Assembly attacks the ban on collective bargaining after the election, it's unlikely to stop there, Stoops said.

"Repealing the ban on collective bargaining would be the first step in providing greater power to unions," Stoops said. "That would include eliminating the right to work and strike prohibition statutes. Collective bargaining is just the tip of the iceberg."