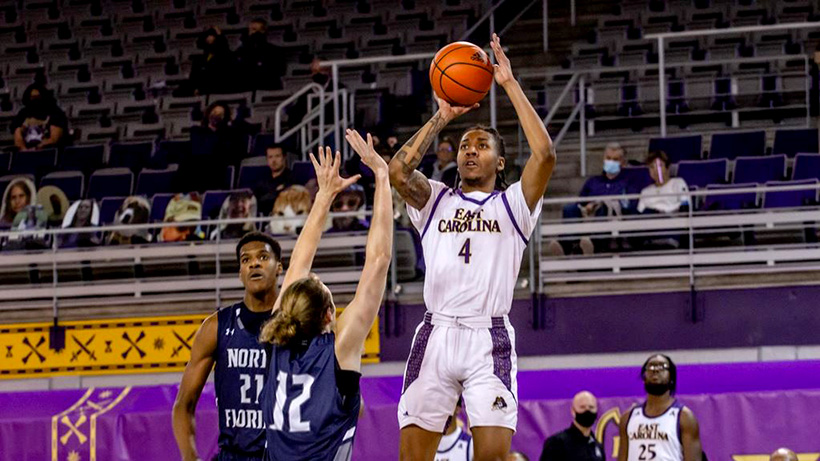 GREENVILLE, N.C.     East Carolina scored the final seven points of the game to avoid its first loss of the season and beat North Florida, 73-67, inside Williams Arena at Minges Coliseum on Thursday night.

Three lead changes ensued over the next 2:50 before Brandon Suggs' driving layup put ECU ahead to stay, 68-67, with 43 ticks left on the clock. Suggs and Gardner then combined to make five consecutive free throws, while the Ospreys came up empty on three consecutive possessions.

With the victory ECU improved to 5-0 for the first time since the 2012-13 season and just the third time as a DI institution. UNF fell to 0-7 on the season.

Gardner posted his second consecutive double-double with a game-high 20 points and 12 rebounds. J.J. Miles went 3 of 3 behind the 3-point arc en route to 16 points with Suggs adding 10 points and Tristen Newton dishing out eight assists.

Ryan Burkhardt had 15 points for the Ospreys. Emmanuel Adedoyin added 11 points and six rebounds, and Jonathan Aybar had nine rebounds.

ECU trailed by nine, 28-19, with eight minutes remaining in the first half before ending the opening stanza on a 21-10 run to lead by two at halftime, 40-38. The Pirates extended their lead to eight during the first seven minutes of the second half.

The Ospreys entered the game shooting 36.8 percent from 3, but ECU held them to 25.8 percent outside the arc.

"The spurts that we played like we're capable of were too short and we'll have to get that correctly quickly, but we make some plays at the end. In an almost twisted way, we are getting to work on some special situations at the end of the game, which are things you can't see in practice. I think that will help in the long run." — ECU Head Coach Joe Dooley

"They are a good team. They've played Miami, Florida State, NC State, they're just coming to ECU thinking they're playing another team. They have the experience and the confidence, and they played their hearts out tonight, but we ultimately came down and got the W. That's all that matters at the end of the day." — Jayden Gardner

"Our team showed a lot of toughness and a lot of resilience even though we were struggling defensively tonight. We were able to get enough stops at the end of the game to pull through." — Brandon Suggs