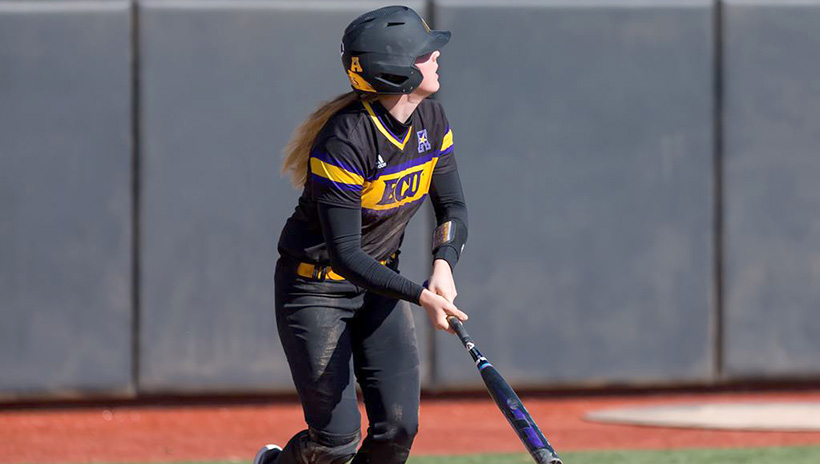 Senior outfielder Olivia Narron finished the day 3-for-4 while junior infielder Chandley Garner and freshman outfielder Logyn Estes rapped out a pair of base knocks apiece. Kiyah Garrett was the hero for the 49ers, going 2-for-4 with a double and four RBI.

Junior RHP Erin Poepping (1-1) took the loss, giving up one earned run on a base hit with a walk in the seventh frame. Classmate Kama Woodall fell just short of her third complete game of the season, surrendering four runs (all earned) on seven hits with two walks and three strikeouts. Lindsey Walljasper (3-1) was the beneficiary of her teammate's last-inning heroics in the victory as she allowed four runs (all earned) on 10 hits with a walk and a pair of strikeouts.

The Pirates jumped out in front right away as Narron and junior infielder Ashleigh Inae tallied consecutive infield singles. With one away, sophomore infielder Bailey Ledvina singled down the left field line to plate Narron before Estes tagged a pitch down the same line for a double that scored Inae and made it 2-0. ECU had the bases loaded after a walk by freshman catcher Sophie Wools, but a grounder back to Walljasper and subsequent 1-3 putout terminated the half inning.

Charlotte answered right back in the home half of the first. With one away, Madelyn Wright singled through the right side and stole second with two outs. Garrett then singled up the middle, allowing Wright to score and cut the East Carolina lead to one. Woodall prevented further damage by inducing a liner to short.

The 49ers scored their second two-out run of the contest in the bottom of the second via a RBI single by Wright. Charlotte had runners on second and third looking to grab the upper hand, but Estes made a nice catch in left to strand the pair.

As both pitchers began to settle in and rattle off outs, Garner broke the deadlock in the top of the sixth with her first home run of the campaign to lead off the frame and give ECU a 3-2 edge. With two away, sophomore utility Keira Womack stepped into the box and homered for the first time in her career to make it 4-2.

Like earlier in the contest, the 49ers attempted an immediate response. Bailey Vannoy was hit by a pitch before pinch runner Karyana Mitchell looked to steal second. However, she was called out for leaving the base early and Woodall retired the next two batters to end the inning.

Charlotte mounted one last charge in the bottom of the seventh. Nicole Bowman singled down the left field line to kickstart the rally before Cori Henderson drew a walk. Spenser Gray then laid down a sac bunt to move the runners into scoring position. Wright fouled out to leave the 49ers with one final shot and they would make good on it as Kourtney Gremillion worked a walk to load the bases and Garrett pounded a three-run double to center to account for the winning RBI.

Up Next     East Carolina opens its home schedule this weekend when Ohio heads to Greenville for a three-game series inside the newly-named Max R. Joyner Family Stadium. The Pirates and Bobcats will play a doubleheader Saturday beginning at 1 p.m. before closing the set Sunday with a single game at Noon.