Pirates Dropped by Cincinnati | Beaufort County Now | A record-setting offensive performance was too much for the ECU women's basketball team to handle as the Pirates fell to Cincinnati 76-61 on Wednesday evening. 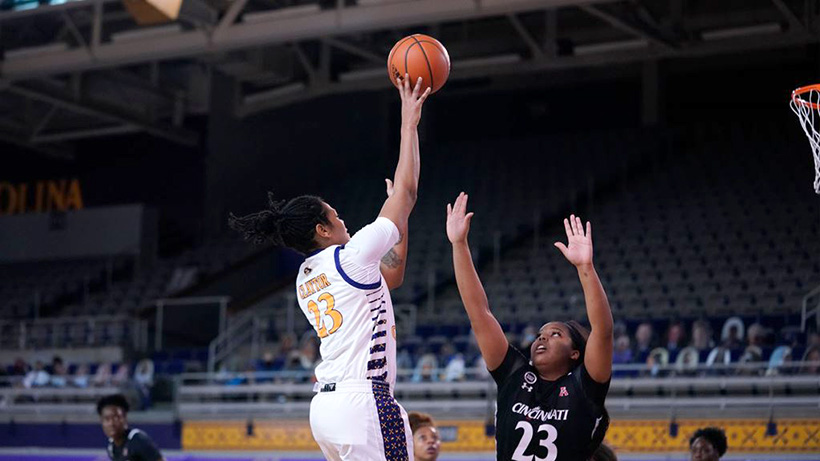 GREENVILLE, N.C. —   A record-setting offensive performance was too much for the ECU women's basketball team to handle as the Pirates fell to Cincinnati 76-61 on Wednesday evening.

The Pirates did not have an answer for Cincinnati's IImar'I Thomas who set an AAC record with 51 points on 20-of-27 shooting from the field and 11-of-13 from the free throw line. Thomas added 12 rebounds to her tally, 10 of which came on the offensive end.

For ECU, Taniyah Thompson scored a team-high 19 points on 8-of-16 shooting with a trio of three-pointers. Lashonda Monk and Synia Johnson each finished with 11 points, which is a new career-high for Johnson. Also setting a career-high was Dominique Claytor with the senior ripping seven of ECU's 16 steals.

In the first quarter, Thomas was perfect from the floor, shooting 6-of-6 for 12 points. But the Pirates used their defense and offense from Thompson to keep up. ECU forced eight Cincinnati turnovers in the first 10 minutes and Thompson nearly matched Thomas by scoring 10 points of her own. That helped ECU trail by just two, 21-19 after one quarter.

In the second quarter though, the ECU offense struggled, shooting just 4-of-22 (.182) from the floor. Thomas added another 12 points to give her 24 in the first half and the Pirates trailed 36-28 at the break.

Heading into the third quarter, a period ECU had dominated in its win over Wichita State on the previous Saturday, the Pirates tried to claw back into the game. ECU played well in the frame on the offensive end, shooting 8-of-20 and scoring seven points off Cincinnati turnovers. But each time ECU tried to gain some momentum, Thomas was there to answer for the Bearcats. Thomas scored 14 of Cincinnati's 19 points in the quarter, helping extend the lead to 55-45.

The fourth quarter was more of the same as ECU could never put together a scoring run to put pressure on Cincinnati. The Pirates never got the deficit down to single digits as Thomas added another 14 points to set the new conference scoring mark at 51.

The Pirates will close out the home portion of their schedule when they host Memphis on Saturday afternoon. That contest will get started at 1 p.m., inside Minges Coliseum and will be broadcast on ESPN+.

On IImar'I Thomas:     "We had no answer for her. I don't think I've ever been a part of a game where one player scores 50 points. More than half of their points. Just not a good showing for us defensively tonight, but credit to them, they came out with a lot of energy, a lot of excitement. Not only defensively we weren't good, but we're still leaving too many points out there. We missed tons and tons of layups. You're not going to win a game against a team like that when you miss that many layups and you allow somebody to come down and score that many points. Just not our night."

On bright spots from this game:     "We turned them over 27 times. But I told them, we can't keep trading baskets. We turn them over and we go on a run, but then we allow them to run off four to six strtaight points. So we get dominated on the boards, but we had 75 possessions. When you limit somebody to that many offensive possessions, the rebound count is probably going to be a little bit off. But we shot 75 shots and we only hit 25 shots. We left 50 shots out there. That's going to be tough to win a game when you leave 50 shots out there like that."

On Synia Johnson:     "From the start, we told Synia we want her to really think defense. She does a good job at the top of our press and at the top of our matchup when we fall back in the half court. I knew she could come in and be a transition guard for us. She's fast, she can get out, she finishes fairly decent. Just seeing her get more comfortable in our defenses and get out on the break and score in transition."

On the schedule moving forward:     "We have Memphis on Saturday and Tulane on Tuesday. We're coming down the stretch with three teams that we beat earlier in the season. I was hoping we could finish this thing out on a four-game winning streak and finish 8-8 in the league. Obviously, that's not going to happen now. Just looking to regroup and go out on Saturday and finish at home with a win."