Kirkendall To Direct Football Operations | Beaufort County Now | Jake Kirkendall, who has spent the last four seasons providing logistical and collaborative leadership in the Southeastern Conference and owns nearly 15 years of experience at the FBS level, has been named director of football operations at East Carolina University 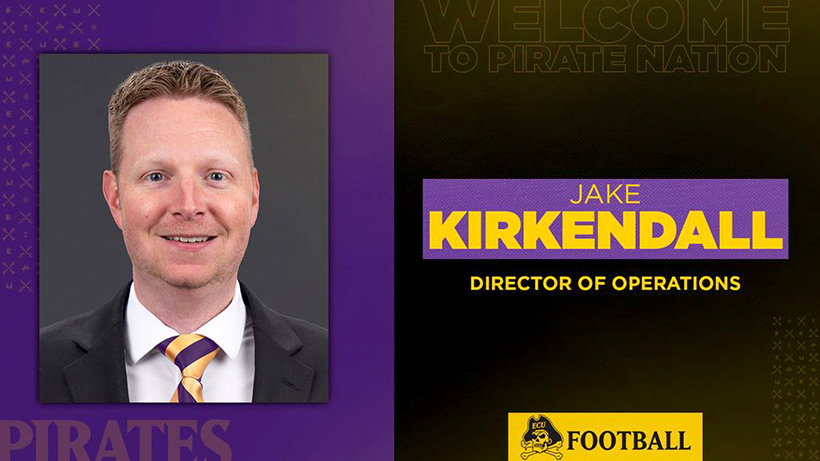 GREENVILLE, N.C.     Jake Kirkendall, who has spent the last four seasons providing logistical and collaborative leadership in the Southeastern Conference and owns nearly 15 years of experience at the FBS level, has been named director of football operations at East Carolina University per an announcement from head coach Mike Houston on Friday.

He most recently served in a similar capacity at Vanderbilt for the past three years after heading Tennessee's operational facets during the 2017 campaign.

"Jake is a consummate professional whose ability to effectively communicate, organize and engage is at the highest level," Houston said. "The value he places on relationship development and his managerial acumen will make him a tremendous asset for our program, university and entire community. We're thrilled Jake is a Pirate."

While with the Commodores, Kirkendall provided cohesive oversight and managed day-to-day activities that impacted many phases of Vanderbilt's program, unifying student-athletes and coaches with support staffs such as strength and conditioning, sports medicine, personnel and recruiting, video, equipment, player development, academics, compliance, facilities and athletics administration.

Additionally, he coordinated all team travel and game day operations during his three-year tenure in Nashville, which included a lead organizational role during the Commodores' appearance in the 2018 Texas Bowl.

Kirkendall initially was appointed to UT's football staff as an associate director of operations in 2016 before earning a promotion to department head status a year later. Along with handling all of the Vols' team travel and supervising daily operational responsibilities, he served as the primary liaison between the team and various athletics administrative departments, institutional, conference and law enforcement entities.

Prior to his move to Knoxville, Kirkendall spent eight years at Eastern Michigan as its director of football operations beginning in 2008. He gained a wide variety of experience while with the Eagles in the Mid-American Conference with his duties ranging from traditional operational aspects to oversight of all video-related assignments, summer camps, fundraising and facility management, while assisting in EMU's community outreach program and recruiting process.

He accepted his first full-time position at Dartmouth in 2007, serving as the Big Green's director of football operations and video coordinator.

A native of Lucas, Ohio, Kirkendall has been a member of the American Football Coaches Association since 2008 and has served the organization as a director of football operations committee member for both District 4 and 7.

Kirkendall, who earned his bachelor's degree in sports management from Ohio University in 2007, is married to the former Marissa Beltowski.