What does your dog say? | Beaufort County Now | Banjo takes over the keyboard once again

What does your dog say? 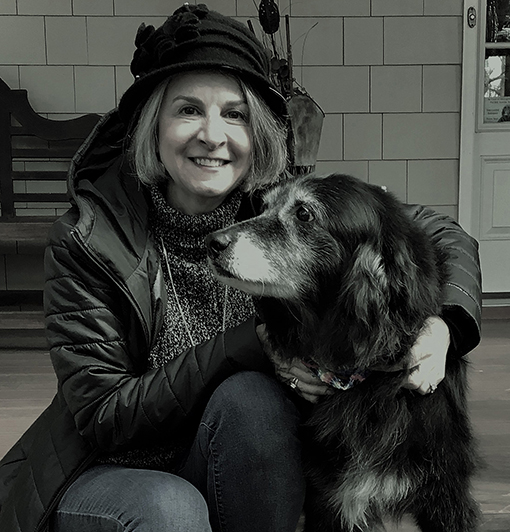 Mystery Author Kathy Manos Penn and Lord Banjo: Above.
Banjo takes over the keyboard once again.

When Mum read a story in the WSJ titled "What's Fido thinking? Put down the phone already," she shared it with me. It was about pet psychics who communicate with all kinds of animals, not just dogs. Of course, it was no surprise to me that we dogs communicate with our people, but I was surprised to hear that guinea pigs, horses, chickens, and pigs do too.

Because the dog in Mum's books talks to her pet parent, Mum was especially intrigued. The difference is that Dickens the dog barks his messages, but in this article, one pet communicator says "she drinks in telepathic images that reveal animals' inner thoughts, be they profound or mundane." It might be quieter in the Cotswolds cottage where Mum's character lives if Dickens could do that instead of barking.

In Mum's books, her character, Leta Petkas Parker, can "talk to the animals," a la Dr. Dolittle, but she learned at an early age to keep her ability secret. That's why Mum especially liked this description of one of the pet communicators:

"...she began hearing animals as a child. She stopped admitting it in her teens. Her parents died when she was in her late 20s, and, overwhelmed by the prospect of three deaths in short succession, she turned to an animal communicator to talk to her terminally ill dog. She immediately recognized that same ability in herself. 'I've heard them in a way that doesn't involve the ears,' she says. 'I've heard them in the heart.'"

You may be wondering how exactly I communicate with my Mum. Sometimes I bark. Well, truth be told, Mum says I do that more than necessary. And sometimes I lie quietly thinking deep thoughts like "I wonder where my treats are" or "I wish Dad would rub my belly." Mum and Dad aren't always as quick on the uptake as I'd like, but they get there eventually. Of course, their inability to get the message has nothing to do with my communication skills. It's more about their inattention. They're too busy looking at their phones or tablets or the TV. I hear that humans multitask, but I guess my pet parents aren't very good at it. Why else would they fail to pick up on the messages I send?

I think Mum hears me even when she doesn't realize it because my thoughts so often wind up in her books as dialogue for Dickens. It's amazing how much alike we boys are. I guess that means I'm planting ideas in Mum's subconscious. After all, I am pretty darned talented.

I noticed an interesting omission in the article. There's no mention of the animal communicators listening to cats. Does that mean cats have nothing to say? It seems to me that my feline sister Puddin' has plenty to say in our household, and there's no doubt Mum and Dad understand her. How do I know that? They rush to obey her every command. They feed her when she runs meowing to the kitchen, and she gets treats when she leaps on Mum's desk and meows-over and over again. She's pretty much in charge around here. I wonder if cats are just too uppity to bother with pet communicators. Too snooty to take the time to transmit images? I asked Puddin' but she gave me the evil eye and strutted to my dog bed instead of answering me. See what I mean about ruling the roost?

Award-winning author Kathy Manos Penn is a native of the “Big Apple,” who settled in the “Peach City” — Atlanta. A former English teacher now happily retired from a corporate career in communications, she writes a weekly column for the Dunwoody Crier and the Highlands Newspaper and is the author of the Dickens & Christie cozy mystery series. Find her books Amazon and contact her at inkpenn119@gmail.com.
Go Back