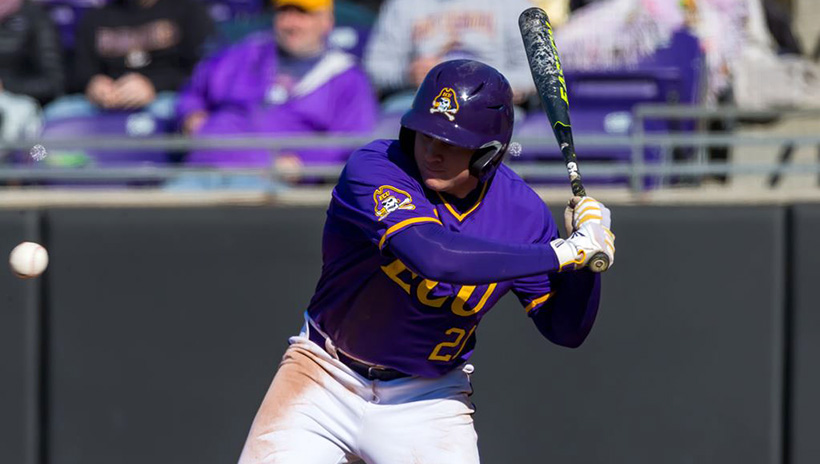 TAMPA, FL     USF scored five runs over the final two innings and earned an American Athletic Conference series split with No. 11 East Carolina, 8-2, Saturday afternoon at USF Baseball. With the win the Bulls improve to 24-26 (14-14 AAC) while the Pirates fall to 38-13 (20-8 AAC) and drop their second game in a row for the first time on the year heading into postseason play.

With the game tied at two-all, Jake Sullivan collected his second RBI of the game for giving the Bulls a 3-2 lead in the third inning. Riley Hogan once again was hit by a pitch and moved to second and then third on consecutive walks by Garrett Saylor. Sullivan lifted a first pitch offering to leftfield easily plating Hogan for the one-run lead.

Baron Stuart (3-2) earned the win allowing just two runs (both earned) on four this with four walks and three strikeouts in five innings. Brad Lord notched his first save of the season tossing 4.0 scoreless frames of relief giving up one hit with two walks and fanning two.

ECU wasted little time in getting on the scoreboard scoring a pair of runs and taking a 2-0 lead in the first. Connor Norby led off with a single, stole second and scored on Thomas Francisco's double to left center with one out. Alec Makarewicz followed with another RBI double, this time down the right field line, pushing across Francisco.

The Bulls responded in the home half of the frame tying the game at two-all. Hogan was plunked by a pitch with one out and when Roberto Pena was walked, he took third on an errant throw by Ben Newton behind the plate. After a Pena stolen base put both runners in scoring position, Daniel Cantu's sac fly plated Hogan. Sullivan followed with a base hit back up the middle scoring Pena.

USF added two runs in the seventh and three in the eighth taking an 8-2 lead. Jarrett Eaton plated Matt Ruiz on a single through the right side and Nick Gonzalez scored on a failed pickoff attempt by Bridges on the seventh. Gonzalez' bases loaded double accounted for the final three runs of the contest.

Francisco and Norby each collected two hits and Makarewicz added another tallying the five total on the day for the Pirates. Over the final two games of the series, ECU registered just eight hits after averaging 10.4 per game heading into the weekend.

ECU, the top seed in the upcoming AAC Baseball Championship, will be back on the diamond Tuesday, May 25 when it plays against eight-seed Memphis at Baycare Ballpark in Clearwater, Fla. First pitch is slated for approximately 12:45 p.m. (ET) and will be streamed on ESPN+.
Go Back