No. 11 ECU Falls to Memphis, 11-1 | Beaufort County Now | Carson Stinnett allowed one run over six-plus innings and his offense was powered by four home runs, including three consecutive in the fifth inning 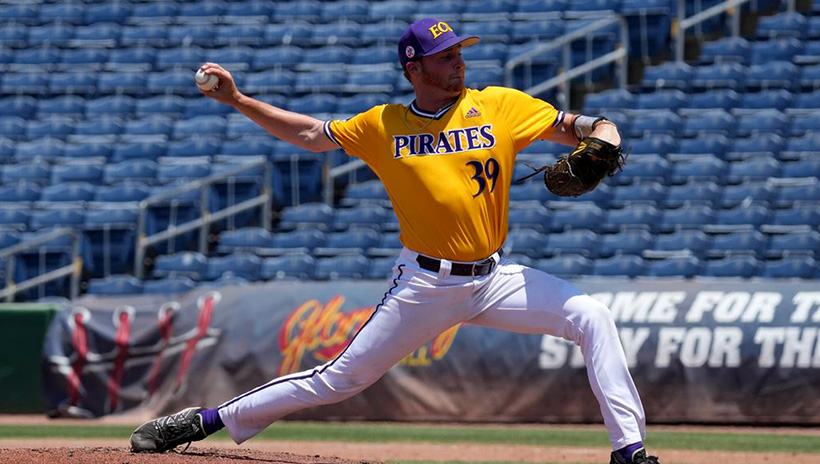 CLEARWATER, FL     Carson Stinnett allowed one run over six-plus innings and his offense was powered by four home runs, including three consecutive in the fifth inning, lifting Memphis to an 11-1 seven-inning win over top seed East Carolina Tuesday afternoon in the American Athletic Conference Baseball Championships at BayCare Park.

With the loss, the Pirates fall to 38-14 on the season and will play Cincinnati Wednesday, May 26 at 3 p.m. in the loser's bracket. The Tigers improve to 18-37 overall and advance to the winner's bracket Thursday to play UCF at 3 p.m.

Trailing 1-0 going to the third frame, the Tigers put up a five-spot in the stanza taking a 5-1 lead and never looked back. With the bases loaded and no outs, Zach Wilson drew the third walk of the frame scoring Ben Brooks and tying the game. Ian Bibiloni plated Chris Swanberg on a sac fly and Hunter Goodman's double down the right field line plated two more. The final run came on Austin Baskin's single back up the middle pushing across Goodman.

Stinnett (4-5) gave up one run (earned) on five hits while walking two and striking out three. Takoda Metoxen registered the final two outs of the game, via strikeout, helping the Tigers to their first win over the Pirates this season.

ECU wasted little time in getting on the board thanks to Connor Norby's 13th home run of the season, a solo blast to left field, on the second pitch of the game for a 1-0 Pirate lead.

Three consecutive home runs in the fifth inning extended the Tigers lead to 9-1. Goodman walked with two outs and came around to score on Alec Trela's two-run shot. From there, Baskin and Taylor Howell followed with solo blasts to left field.

Memphis plated two more run in the seventh capping the scoring at 11-1. Bibiloni led off the inning with a solo home run to left field and Howell's sac fly to left scored Goodman to account for the other run.

ECU was out-hit on the day eight to five with Seth Caddell, Josh Moylan Norby, Jacob Starling and Bryson Worrell registering the base knocks for the Pirates. Caddell was the lone Pirate to reach base twice as he added a walk in the sixth after his single in the fourth.
Go Back