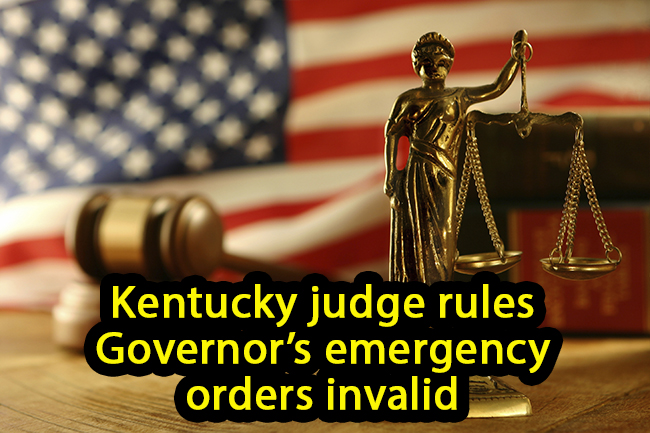 Today my colleague from Kentucky, Chris Wiest, received an awesome ruling from the Circuit Court of Boone County declaring that all of Governor Andy Bashear’s emergency orders and actions are unconstitutional and void. The ruling was in the state-court challenge to the governor’s emergency powers executive orders, filed by Wiest on behalf of Beans Cafe’ & Bakery.

Dr. Stephen Petty, an actual expert in masks, testified at the trial about their uselessness under the circumstances in which they’re being idolized. Here’s an excerpt from the order pertaining to Dr. Petty. For those bureaucrats and social media tyrants who would censor this, this is from an actual court order issued today. Not that you care:

Stephen E. Petty, P.E., CIH, testified as an expert and was accepted as such without objection. Mr. Petty has served as an expert witness in approximately 400 cases relating to toxic or infectious exposure, personal protective equipment (“PPE”), and as a warning expert. He also served as an epidemiology expert for the plaintiffs in the Monsanto “Roundup” cases, and for those in the Dupont C8 litigation. In connection with his service as an expert, he was deposed nearly 100 times and has provided court testimony in approximately 20 trials. Mr. Petty holds nine U.S. patents, has written a book comprising nearly 1,000 pages on forensics engineering, is a certified industrial hygienist, and a recognized expert with the Occupational Safety and Health Agency. Mr. Petty helped write the rules on risk assessment for the State of Ohio and has trained Ohio’s risk assessors.

Mr. Petty explained that the field of his expertise is “to anticipate and recognize and control things that could hurt people, everything from making them sick to killing them.” He testified that, in this context, he has analyzed the use of masks and social distancing in connection with Covid-19. He testified that both the six-foot-distancing rule, and mask mandates, are wholly ineffective at reducing the spread of this virus. Masks are worthless, he explained, because they are not capable of filtering anything as small as Covid-19 aerosols. In addition, masks are not respirators and lack the limited protections that respirators can provide.

The N-95 respirator, which he states is in the bottom class of what may be classified as a respirator, is rated to filter 95% of all particles that are larger than .3 microns. However, a Covid-19 particle, which is only between .09 to .12 micron, is much smaller. Mr. Petty further explained that an N-95 will not even filter above .3 microns if it is not used in accordance with industry standards. Among the requirements, respirators must be properly fitted to seal along the face, and they also must be timely replaced. Mr. Petty stated that N-95 masks, which he said are often utilized as surgical masks, are “not intended to keep infectious disease from either the surgeon or from the patient infecting each other” but only to catch the “big droplets” from the surgeon’s mouth.”

According to Mr. Petty, masks have no standards, are not respirators, and do not even qualify as protective equipment. In contrast, respirators have standards, including rules that state respirators may not be worn by persons with facial hair, must be fitted to ensure a seal, and must be timely replaced—or, as in higher end respirators, the cartridges must be replaced to prevent saturation. In addition, standards for respirators also require users to obtain a medical clearance because the breathing restriction can impair lung function or cause other problems for persons having such limitations. Putting those persons in a respirator can harm their well-being.

Concerning the effectiveness of respirators, Mr. Petty explained that it comes down to “big stuff” versus “small stuff.” Big stuff can be taken out by the body’s defenses, such as its mucus tissue, where droplets can be caught and eliminated. The small stuff, however—like aerosols—are more dangerous. Masks cannot filter the small stuff. According to Petty, because Covid-19 particles are comprised of aerosols, it is really, really, small stuff. And, as he pointed out, an N-95 is designed to filter larger particles. Even for particles as large as .3 micron, Mr. Petty testified that an N-95’s effectiveness is in direct proportion to its seal. In fact, he stated it becomes completely ineffective if 3% or more of the contact area with the face is not sealed.

Mr. Petty testified that masks leak, do not filter out the small stuff, cannot be sealed, are commonly worn by persons with facial hair, and may be contaminated due to repetitive use and the manner of use. He emphatically stated that mask wearing provides no benefit whatsoever, either to the wearer or others.

He explained that the big droplets fall to the ground right away, the smaller droplets will float longer, and aerosols will remain suspended for days or longer if the air is stirred. Mr. Petty testified that the duration of time that particles remain suspended can be determined using “Stoke’s Law.” Based on it, for particles the size of Covid-19 (.12 to .09 micron) to fall five feet would take between 5 and 58 days in still air. Thus, particles are suspended in the air even from previous days. And so, he asks, “If it takes days for the particles to fall, how in the world does a six-foot rule have any meaning?”

Mr. Petty acknowledged that both OSHA and CDC have recommended that people wear masks. However, he called this “at best dishonest.”61 As an example on this, he pointed to CDC guidance documents where, on page 1, it recommends wearing a mask; but then on page 6, admits that “masks, do not provide . . . a reliable level of protection from . . . smaller airborne particles.”62 According to Mr. Petty, those agencies have smart individuals who know better. Mr. Petty points out that, even before March 2020, it was known that Covid-19 particles are tiny aerosols. And on this, he states that he insisted that fact early on. He also points to a more recent letter by numerous medical researchers, physicians and experts with Ph.D.s, asking the CDC to address the implications of Covid-19 aerosols. During Dr. Stack’s subsequent testimony, he also acknowledged that Covid-19 is spread “by . . . airborne transmission that could be aerosols . . . .”

Finally, Mr. Petty pointed to another recent study by Ben Sheldon of Stanford University out of Palo Alto. According to that study, “both the medical and non-medical face masks are ineffective to block human-to-human transmission of viral and infectious diseases, such as SARS, CoV-2 and COVID-19.”64 The Court finds the opinions expressed by Mr. Petty firmly established in logic. The inescapable conclusion from his testimony is that ordering masks to stop Covid-19 is like putting up chain-link fencing to keep out mosquitos. The six-foot- distancing requirements fare no better.

The judge summarizes the situation nicely:

It is obvious from even a cursory review that the orders issued over the past fifteen months “attempt to control” and seek “to form and determine future rights and duties” of Kentucky citizens. These included ordering the closure of all businesses, except those the Governor deemed essential. He ordered churches closed, prohibited social gatherings, including at weddings and funerals, prohibited travel, and through CHFS, even prohibited citizens from receiving scheduled surgeries and access to medical care. And then there is the order that everyone wear a mask. These are, undeniably, attempts to control, set policy, and determine rights and duties of the citizenry. Except in those instances where the federal courts have stepped in, Defendants assert authority to modify or re-impose these orders at their sole discretion. Consider, for example, the recent modification of the mask mandate. It orders persons who did not get vaccinated for Covid-19 to wear masks but lifts that requirement for others. That is setting policy and determining future rights and duties.

At the hearing, Defendants took exception to the Attorney General’s characterization of the Governor’s actions as a “lockdown,” and argued that prohibiting persons from entering those restaurants is not the same as ordering that they be closed. But that doesn’t minimize the impact on those who lost their businesses as a result, or those in nursing homes condemned to spend their final hours alone, deprived of the comfort from loved ones (or even any real contact with humanity), or those citizens who the Governor prohibited from celebrating their wedding day with more than ten persons, or those he forced to bury their dead alone, without the consoling presence of family and friends (and who likewise were deprived of paying their final respects), or those persons who were barred from entering church to worship Almighty God during Holy Week, and even Easter Sunday, or those persons who were denied access to health care, including cancer-screenings, or those denied entry into government buildings (which they pay for with their taxes) in order to obtain a necessary license, and who were forced to wait outside for hours in the sweltering heat, or rain, purportedly to keep them from getting sick.

What the people have endured over the past fifteen months—to borrow a phrase from United States District Judge Justin R. Walker—“is something this Court never expected to see outside the pages of a dystopian novel.” Yet, Defendants contend that the Governor’s rule by mere emergency decree must continue indefinitely, and independent of legislative limits. In effect, Defendants seek declaratory judgment that the Constitution provides this broad power so long as he utters the word, “emergency.” It does not. For this Court to accept Defendant’s position would not be honoring its oath to support the Constitution; it would be tantamount to a coup d’état against it.

Here’s the order itself:

View this document on Scribd

Yes, life is now a dystopian novel. Let’s hope this patriot judge’s order stands up on appeal in the state appellate courts in Kentucky. And thanks to Chris Wiest and the AG of Kentucky for fighting the good fight. The order notes that the permanent injunction against the governor goes into effect on June 10, 2021 at 5:00 p.m.

Hat tip to Nancy Murdock for sending us this link.