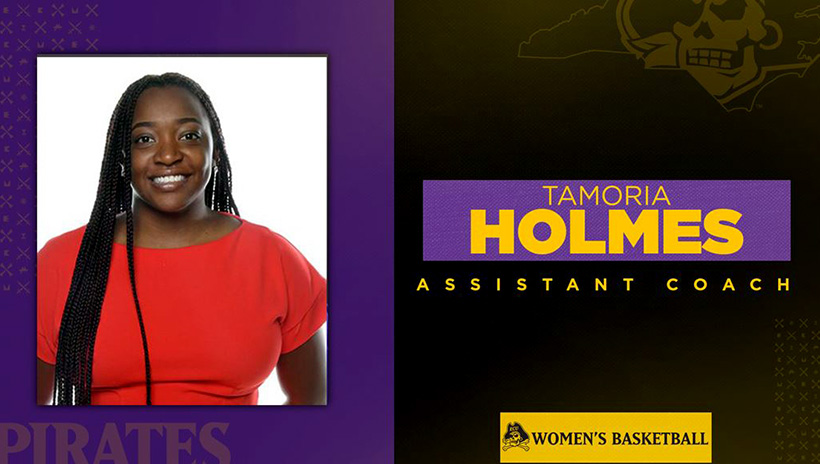 "We are excited to welcome Tamoria to our family," McNeill said. "She's an up-and-coming assistant coach that can do a lot of different things. She will serve as our recruiting coordinator and also work with our guards. Bringing Tamoria back to her home state of North Carolina is exciting for her and a plus for our program with her connections with in-state coaches and players. Tamoria is a great person who will be supportive and a mentor for our young women on the court and in life."

Holmes arrives in Greenville after four seasons on staff at her alma mater, Howard University. Along with her duties as assistant coach, Holmes served as recruiting coordinator for the Bison. During her four seasons, Holmes helped lead the Bison to record highs. During the 2020–21 season, Holmes helped guide Howard to a 15-4 record, setting a new school-record with a .824 winning percentage (14-3) during the regular season, as well as earning the No. 1 seed in the MEAC Championship and reaching the league's championship game. It was the third consecutive season that Howard has finished with a winning record under Holmes' watch.

Holmes was named to the Women's Basketball Coaches Association (WBCA) Thirty Under 30 for the 2019–20 campaign. She has helped tutor six different Howard players to a combined 11 postseason honors, including Jayla Thornton earning the 2020–21 MEAC Player of the Year award and Anzhane' Hutton earning the league's Rookie of the Year honor.

Prior to returning to her alma mater, Holmes spent a season as an assistant coach at Norfolk State. Holmes helped the Spartans finish with a .500 record for the first time since the 2001–2002 season and coached Kayla Roberts (First-Team All-Conference) and Jordan Strodes (Third-Team All-Conference) to postseason honors.

Holmes started her collegiate coaching career at Chowan University. While at Chowan, Holmes helped the Hawks to two of the best seasons in program history. Chowan reached the 20-win mark for the first time in school history during the 2015–16 campaign, as well as earning the program's first regional ranking and the first berth in the NCAA Division II Tournament. Holmes helped tutor Alisha Mobley who earned First-Team All-Conference honors in both 2014–15 and 2015–16 while also helping Dhyamond Crenshaw and Mercedes Tapia earn All-Rookie Team Honors.

A native of Durham, N.C., Holmes was a four-year letterwinner and two-year captain for the Howard women's basketball team from 2009–13. She helped guide the Bison to the MEAC Tournament championship game three times in her career and was a First-Team All-MEAC performer in 2011–12 after leading the league in scoring (18.3 points per game). She also ranked fourth in the MEAC in steals (2.5) and sixth in free-throw percentage (77.0) that season, which culminated in Howard posting a 24-9 record (14-2 MEAC) and earning a berth in the WNIT. That was one of three postseason trips for Holmes and her teammates, with the Bison reaching the WNIT in 2011 as well as a trip to the CBI in 2013. Holmes left Howard as a member of the Bison 1,000-point club and was a Second-Team All-HBCU All-American following the 2011–12 campaign.

Holmes earned her bachelor's degree in health science from Howard in 2013.
Go Back