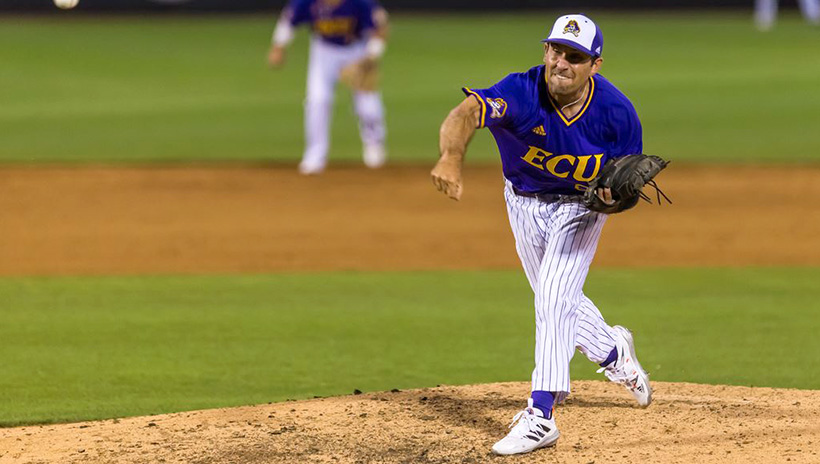 GREENVILLE, N.C.     East Carolina pitcher Matt Bridges has been name to the CoSIDA Academic All-District 3 First-Team according to an announcement by the organization Thursday afternoon.

CoSIDA recognizes the nation's top student-athletes for their combined performances on the field and in the classroom. The First-Team Academic All-District honorees advance to the CoSIDA Academic All-America ballot, where first-, second- and third team All-America honorees will be announced in late July.

Bridges, who is currently pursuing his MBA, is a 10-time ECU Director of Athletics Honor Roll member and five-time American Athletic Conference All-Academic selection. In May of 2020, Bridges earned his undergraduate degree in public health studies.

The Shelby, N.C. native closed out his five-year career helping the Pirates to a 44-17 overall record in 2021, the American Athletic Conference regular season title, NCAA Greenville Regional championship as the No. 13 National Seed and an appearance in the Nashville Super Regional.

On the mound, he appeared in 29 games posting a 5-0 mark with five saves and struck out 45 batters in 36.0 innings. Bridges allowed just 10 runs (nine earned) on 30 hits while holding opposing hitters to a .227 composite batting average. The right-hander was named the Greenville Regional Most Outstanding Player after helping the Pirates to a perfect 3-0 record where he recorded a win and notched a pair of saves.

For his career, he owns a 9-4 record with 11 saves and has appeared in 107 games ranking second all-time in program history. He surrendered 58 runs (55 earned) on 115 hits with 155 strikeouts to 63 walks in 144.0 career innings. A five-year letterman, Bridges has been a part of four NCAA Regional's, three Super Regional's, two American Athletic Conference regular season titles and one AAC Tournament championship.
Go Back