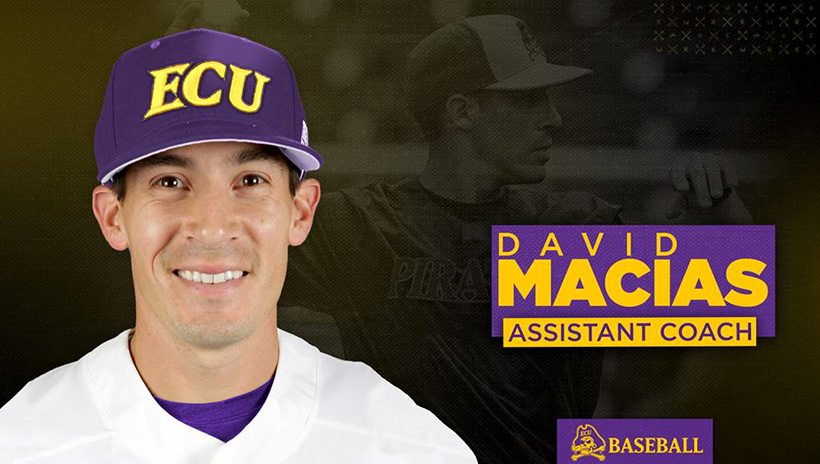 GREENVILLE, N.C.     David Macias has been named an assistant coach at East Carolina University according to an announcement from head baseball coach Cliff Godwin Thursday.

His appointment to the Pirates' staff ends a four-year stint at Vanderbilt where he served as the volunteer coach helping the Commodores to a pair of College World Series Finals including the 2019 National Championship. Macias will work directly with the Pirate catchers and outfielders, assist Godwin with the offense and associate head coach Jeff Palumbo with recruiting.

"We are excited to welcome David, Pam, Manny and Javier to the Pirate baseball family," Godwin said. "David brings a wealth of professional and collegiate experience to our program having appeared in four College World Series and winning a pair of national championships at Vanderbilt. He is one of the best coaches in the country and his proven path of developing players will only make our program that much better."

"My wife and I are extremely excited to be part of the ECU baseball family," Macias said. "With a deep tradition of winning and a proven leader in Cliff, we can't think of a better place to be coaching or a better community to raise our family."

Despite a shortened 2020 season, the Commodores saw significant development from true freshmen class that accounted for 37 percent (37 of 99) of the team's RBIs, 36 percent (59 of 65) of hits and 35 percent of runs (34 of 98). Junior Austin Martin, the fifth overall pick in the 2020 MLB Draft, closed out his career batting .377 in 16 starts while leading the team with 15 runs and six doubles.

With the help of Macias, the Commodores surged offensively during their historic 2019 campaign, setting single-season records in home runs (100), RBIs (541), walks (339) and runs (578). Vanderbilt posted an SEC-record 59 wins en route to capturing the College World Series title. Vanderbilt secured the SEC regular season and tournament titles, becoming the first program to accomplish the feat outright since Vandy's 2007 program did so.

The 2018 season was highlighted by three-straight wins at the NCAA Clemson Regional where the Commodores claimed their second consecutive regional title. With the result, Vanderbilt went on to host the NCAA Super Regionals for the first time since 2014.

The Black and Gold set a program record and ranked fifth nationally with a .981 fielding percentage. With 101 stolen bases, Vandy finished atop the SEC for the third time in six seasons. The team's 67 home runs also ranked 23rd nationally.

Macias initially joined Vanderbilt's staff as a strength coach in 2014 when the 'Dores won the national championship and volunteer assistant in 2015 when Vanderbilt returned to the College World Series finals.

Prior to rejoining Corbin's staff, Macias was with the Seattle Mariners organization as a minor league manager. He took over as skipper of the Single-A Clinton LumberKings midway through the 2017 Midwest League season. He had been serving as the Mariners player and staff systems coordinator before taking over managerial duties. In 2016, he was the team's coordinator of international player programs.

The former Commodore outfielder played four seasons in professional baseball (2008–11), all in the Chicago Cubs' organization, after being selected in the 19th round of the 2008 MLB Draft by the Cubs.

Macias, who earned four letters at Vanderbilt from 2005–08, was named First-Team All-SEC, Second-Team All-South Region (District 3) and was selected for the Jeff Peeples Most Valuable Teammate Award during his senior season. His 96 hits during the campaign are tied for fifth-most on Vanderbilt's single-season list and Macias stands ninth all-time in at-bats (784) and 10th in hits (255).

A native of Woodlands, Texas, Macias received his undergraduate degree in sociology from Vanderbilt. He and his wife Pam have two sons, Manny and Javier.
Go Back