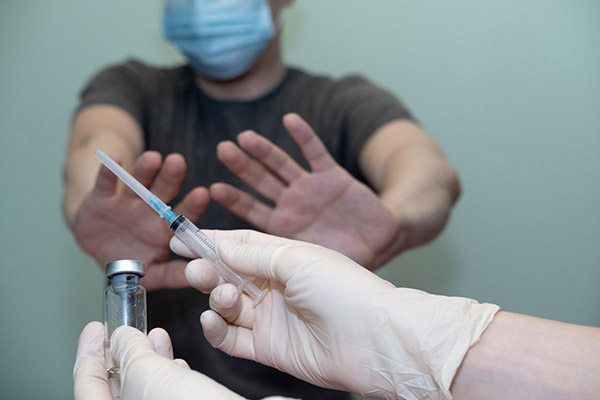 If you’re tired of the pandemic and just want to go back to normal, David Frum at The Atlantic has news for you: It’s all the stupid people who refuse to take the vaccine that are prolonging our COVID misery.

Oh, wait, that’s not it exactly. In actuality, it’s all Trump’s fault. Frum, once a leading voice of the conservative establishment, declares: “Pro-Trump America has decided that vaccine refusal is a statement of identity and a test of loyalty.”

That’s an odd statement given Trump was in favor of the COVID vaccine, got it himself, and even launched Operation Warp Speed to develop and roll out the vaccine quickly. Frum also seems to forget that many liberals have been skeptical of the vaccine as well, while numbers of conservatives—including Alabama Gov. Kay Ivey, who also recently suggested we blame the unvaccinated for the pandemic surge—have staunchly supported the vaccine.

The fact is, many unvaccinated people may not be acting out of willfulness or spite as Frum suggests. They may instead be looking at the data and wisely expressing caution until more is known about the vaccine and its effects. More information is surfacing on that front every day…but you probably wouldn’t know that unless you looked past the talking points of our ruling elites.

As I mentioned in a recent article, Israel, one of the most vaccinated countries in the world, is a good indicator of how the vaccine is working. A few weeks ago it was reported in The Times of Israel that 60 percent of those vaccinated had not contracted COVID, a startlingly low rate considering the vaccine has only been in effect for a few months. However, the latest data out of Israel is even worse, for now that number has dropped to 39 percent, though the vaccine is 91 percent effective at preventing severe cases of COVID. The vaccine’s benefits also appear to be very short-lived.

Unfortunately, statistics like that are often overlooked in the U.S., a fact former New York Times reporter turned author Alex Berenson has been carefully documenting. In a recent article, Berenson explained that the U.S. doesn’t give the full truth about who is dying or having complications from the COVID vaccine. The official narrative advanced by Dr. Anthony Fauci and others is that the unvaccinated are the ones getting sick and dying, yet data shows such a narrative is false.

As Berenson notes, official numbers in the U.S. do not include the partially vaccinated. Authorities claim a person is not fully protected until several weeks after they have had both doses, and so anyone who has received a shot but not completed the full course of treatment is treated as unvaccinated for statistical purposes. This is not how things are usually done with most medical treatments, nor is it the case in other countries. Thus, many U.S. COVID cases in the last few months attributed to unvaccinated individuals actually occurred in those who were partially vaccinated, a fact that is often suppressed and never reaches the ears of mainstream Americans.

Berenson also uses data from the Centers for Disease Control (CDC) to show officials like Fauci are flat out lying when they say that only about 1 percent of the fully vaccinated are contracting or dying from COVID, when in reality around 10 percent of U.S. COVID deaths since the beginning of May 2021 have been in the vaccinated. That still is not a number to be ashamed of, Berenson says, so why don’t officials like Fauci simply tell the truth and admit that the vaccines last for a short time and won’t necessarily stop the virus from spreading?

Aleksandr Solzhenitsyn’s 1970 Nobel Lecture sheds some light on this question. “We shall be told,” he says, “what can literature possibly do against the ruthless onslaught of open violence? But let us not forget that violence does not live alone and is not capable of living alone: it is necessarily interwoven with falsehood. Between them lies the most intimate, the deepest of natural bonds.”

According to the good ol’ dictionary, the use of force can be one meaning of the word violence. We may not yet be seeing physical force to get us to wear masks, take the vaccine, or stay locked down (although in some cases people actually have), but we are definitely seeing our government officials use other forms of coercion, through mass media messages and official talking points, to get us to conform to their way of thinking. And that force or violence, Solzhenitsyn explains, can only survive when it’s cloaked in falsehood:

Violence finds its only refuge in falsehood, falsehood its only support in violence. Any man who has once acclaimed violence as his METHOD must inexorably choose falsehood as his PRINCIPLE. At its birth violence acts openly and even with pride. But no sooner does it become strong, firmly established, than it senses the rarefaction of the air around it and it cannot continue to exist without descending into a fog of lies, clothing them in sweet talk. It does not always, not necessarily, openly throttle the throat, more often it demands from its subjects only an oath of allegiance to falsehood, only complicity in falsehood.

We are being throttled with ever more force, a fact revealed by Berenson’s information about COVID, as well as by the increasing censorship he is encountering. This throttling will only continue in the weeks ahead, not only with regards to COVID, but in other realms as well. The question we must ask ourselves is whether we will allow this throttling and violence to continue. If we do not speak up, then we are a party to falsehood and violence just as much as are our elites.

The time to make a conscious choice about whether to choose truth or falsehood is fast approaching.