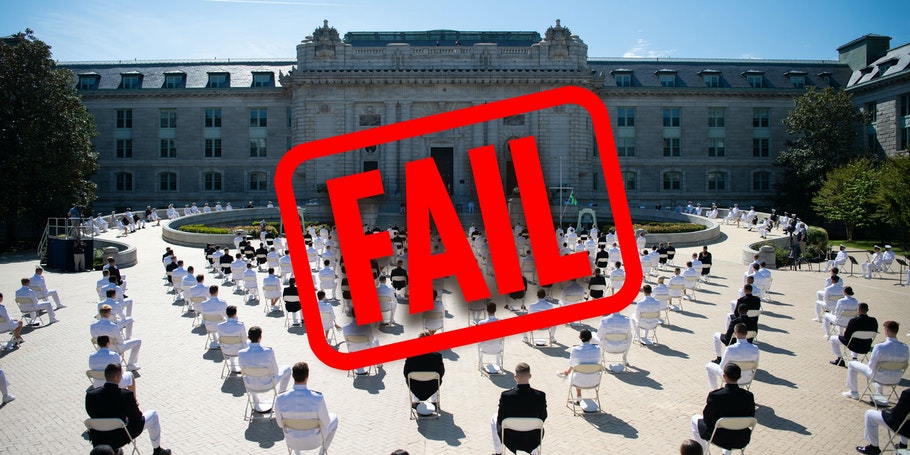 By:  J. P. Jones in PatriotPost.com

With the infusion of Marxist dogma, the Naval Academy is failing to prepare Navy and Marine Corps officers.

As a retired Navy Officer and United States Naval Academy graduate from a class prior to Vice Admiral Sean S. Buck, the Academy’s superintendent, I find myself wondering why he and so many of his high-ranking peers are so intent upon forcing Critical Race Theory and other “woke” dogma into our military members’ “training,” which many unhesitatingly call indoctrination into Marxism.

Unfortunately, during the eight years before President Donald Trump took the Oval Office, most if not all of the flag and general officers who would not support this clearly racist doctrine had been “purged” to make room for those officers who were willing to ignore their oath to “support and defend the Constitution of the United States against all enemies, foreign and domestic.” An October 2013 editorial in Investor’s Business Daily recounts the names of some of the nearly 200 senior officers purged and offers a very feasible explanation of why.

In September 2020, based upon President Trump’s executive order, Russ Vought, director of the Office of Management and Budget, wrote a memo informing all federal agencies of Trump’s instruction to stop using controversial forms of training on “critical race theory,” “white privilege,” and “any other training or propaganda effort that teaches or suggests either … that the United States is an inherently racist or evil country or … that any race or ethnicity is inherently racist or evil.” Clearly, for VADM Buck to continue allowing the inclusion of CRT in Naval Academy curricula was a violation of that order. He should have been removed as superintendent immediately for failure to obey a lawful order that originated with his commander-in-chief, President Trump.

Yet the USNA “Diversity and Inclusion Strategic Plan,” which aligns with the Chief of Naval Operations’ recent memo on Navy diversity, was signed by all the Academy’s senior leadership, in which they attest that they “remain committed to diversity, equity, and inclusion, and further promote dignity and respect for all.” While these words may sound lofty, in practice, they ring very hollow.

USNA graduate and seasoned Navy veteran Stu Cvrk has detailed an independent investigation by another USNA graduate, Ed Cotter, regarding the poisonous doctrine being taught to Midshipmen, despite public assurances from the superintendent that CRT is not part of their curricula.

The Naval Academy’s mission is “to develop Midshipmen morally, mentally and physically and to imbue them with the highest ideals of duty, honor and loyalty in order to graduate leaders who are dedicated to a career of naval service and have potential for future development in mind and character to assume the highest responsibilities of command, citizenship and government.” Nowhere does this state, nor should it, anything about judging others based upon their race, which is the ultimate goal of CRT.

To those who still question whether CRT is, in fact, divisive as well as many other things, I challenge you to take any CRT “training” document and replace each occurrence of the word “white” with “black.” You will find that it sounds very racist! However, those who developed Critical Race Theory have somehow convinced the ignorant that their doctrine is somehow “fair.”

Unfortunately, with the Biden White House — which immediately rescinded President Trump’s executive order removing CRT from federal training — and much of the senior military leadership and most of the media supportive of CRT, it will be quite a challenge to root it out of school systems at all levels, most especially the Service Academies. But it absolutely must be removed before it irreparably damages our military’s morale and ability to fight as a team, in which trust is a norm.