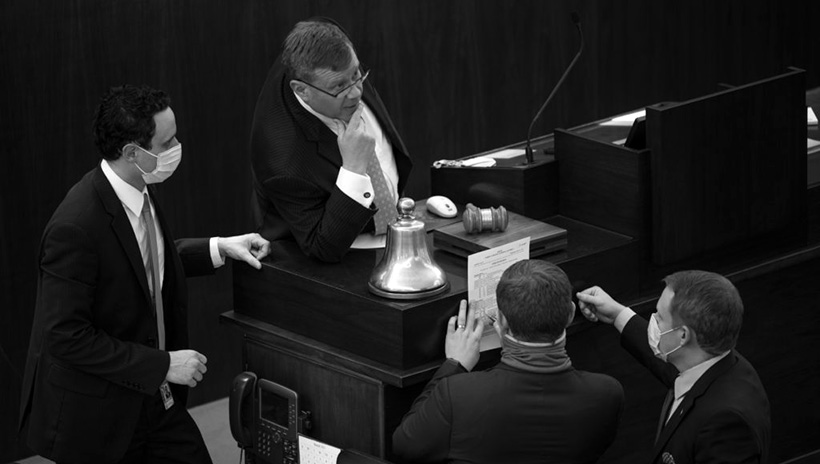 The biennial budget plan from the N.C. House calls for smaller reductions to personal and corporate income taxes than the Senate proposal while bumping pay for teachers and state employees and appropriating billions for capital infrastructure and construction.

N.C. House Speaker Tim Moore, R-Cleveland, was joined by House budget chairs Monday, Aug. 9, for a news conference outlining the chamber's biennial proposal. The spending plan comes after the initial proposal from the N.C. Senate earlier this summer. The House will vote on it this week. The two chambers must then reach concurrence on final budget legislation before voting and sending it to Gov. Roy Cooper, who has never approved a budget from the General Assembly.

What makes the House proposal different from the Senate proposal?

The contrasts between the proposals with the widest impact on North Carolinians can be found in the respective tax-cutting plans, with the House taking a more moderate approach to cut personal and corporate income taxes. Whereas the Senate plan calls for cutting that tax rate down to 3.99%, under the House proposal the current rate of 5.25% will drop to only 4.99% for North Carolina taxpayers. It also raises the standard deduction for all taxpayers from the current $21,500 to $25,500 for married couples filing jointly, and from $10,750 to $12,750 for single taxpayers.

"This year we didn't need a bond," said Moore at the Monday afternoon conference, alluding to past years' bond proposals to fund infrastructure investments. He added, "I don't think we've ever spent this much on capital in the history of the state."

The capital spending plan is about $9 billion. Budget writers said this portion of the plan is focused on achieving three things: addressing pent up and aging infrastructure needs; addressing needs from pandemic impact and recovery; and, investing in education "in a way that really aligns our system with preparing students for the jobs of the future."

"This budget shows a very forward-looking North Carolina for our citizens and particularly for our children," Saine said. "It's incredibly important that we get that connectivity out there, out to every part of the state."

The proposal designates $750 million for school capital funding over the next two years using money from the N.C. Education Lottery.

Speaking of education, the House budget proposal maintains the perennial focus on teacher salary raises, as well as raises for other state employees.

Rep. Jeff Elmore, R-Wilkes, a public school teacher, said Republican lawmakers are focusing on improving recruitment of younger teachers with better benefits packages, including a proposed eight weeks of paid parental leave and a state match program for teacher recruitment bonuses. House budget writers aim to increase experienced teacher pay by elevating the back end of the salary step system, although some "highly qualified teaching graduates" can start as high as a third-year teacher on the salary schedule.

The House plan also brings back a 10% pay increase for teachers who earn relevant master's degrees, offers $300 testing bonuses to all teachers, revises personal leave policies to eliminate the $50 charge for teacher's missing a school day, and increases assistant principal pay by 3%.

While varying depending on experience and qualifications, the average teacher salary will increase 4% this year, and reach a total average increase of 5.5% in year two.

Other state employees will get a bump under the House plan, as well, increasing by 2.5% each of the two-year budget cycle for a total increase of 5%. Additionally, the House budget uses federal funds to appropriate a $500 bonus for every state employee. Direct-care workers see a bonus of $2,000 and policies to raise the average compensation of direct-care workers to $15 an hour.

In lieu of a Cost of Living Adjustment, the House plan gives state retirees 2% increases each year, for a total bump of 4%.

N.C. House Majority Leader John Bell, R-Wayne, said it may be the largest investment in flood mitigation in North Carolina history, and couldn't come at a better time.

"It's no secret North Carolina had two over '1000-year' floods in the last several years," Bell said at the press conference.

House budget leaders indicated the full spending plan will be reviewed in summary and amendments considered Tuesday, before facing a first full floor vote on Wednesday and a final floor vote Thursday. The entire budget proposal can be viewed HERE; the committee report HERE.
Go Back