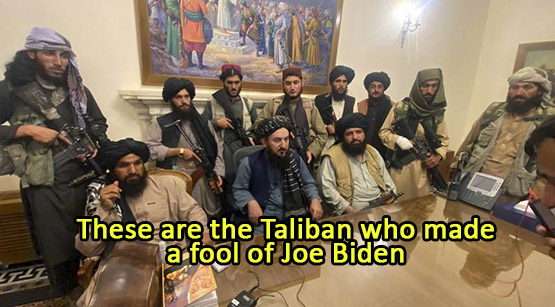 More news that shows the evacuation of Afghanistan disaster could have been prevented.  RedState.com reports:

During his testimony before the House today, CENTCOM head Gen. Frank McKenzie confirmed something that we reported last month – that during a meeting that McKenzie had with the Taliban leader Abdul Ghani Baradar, he was offered the full control of Kabul while evacuation operations were completed.

It was an astonishing report revealed last month – that they had the opportunity to provide a safe withdrawal with the whole city being a buffer around the airport, offered by the Taliban – but turned it down instead opting for the unsafe, completely endangered and at-risk situation they ended up with, at the mercy of the Taliban. It’s likely why U.S. service members and Afghans were killed in the suicide attack.

“I met with Mullah Baradar on 15 August to pass a message to him that we were withdrawing, and if they attempted to disrupt that withdrawal we would punish them severely for that,” McKenzie began.

“But did he offer for you to have security over all of Kabul, not just the airport?” Gallagher interjected.

“As part of that conversation, [Baradar] said, ‘well, why don’t you just take security of all of Kabul?’ That was not why I was there, that was not my instruction, and we did not have the resources to undertake that mission,” McKenzie said.

“I did not consider that to be a formal offer and it was not the reason why I was there, so I did not pursue it,” he said later in the questioning.

Asked if the offer to remain in control of Kabul was relayed to President Joe Biden, McKenzie stated, “The offer was made in the presence of the president’s special representative to Afghanistan” before adding that he did not know if the offer was then reported to the White House.

McKenzie basically indicated he killed the offer because he was locked into the orders he had that he was just there to do an evacuation. But he didn’t think it was important enough to mention it to Joe Biden? Or Secretary of Defense Austin? It makes no sense why would you not take the opportunity to have a safer situation that was offered.

Instead the U.S. forces were then left at the mercy of the Taliban who beat people and stopped them from getting through to the airport, hindering who knows how many people from getting to safety, absolutely hindering the mission that McKenzie was supposed to be carrying out.