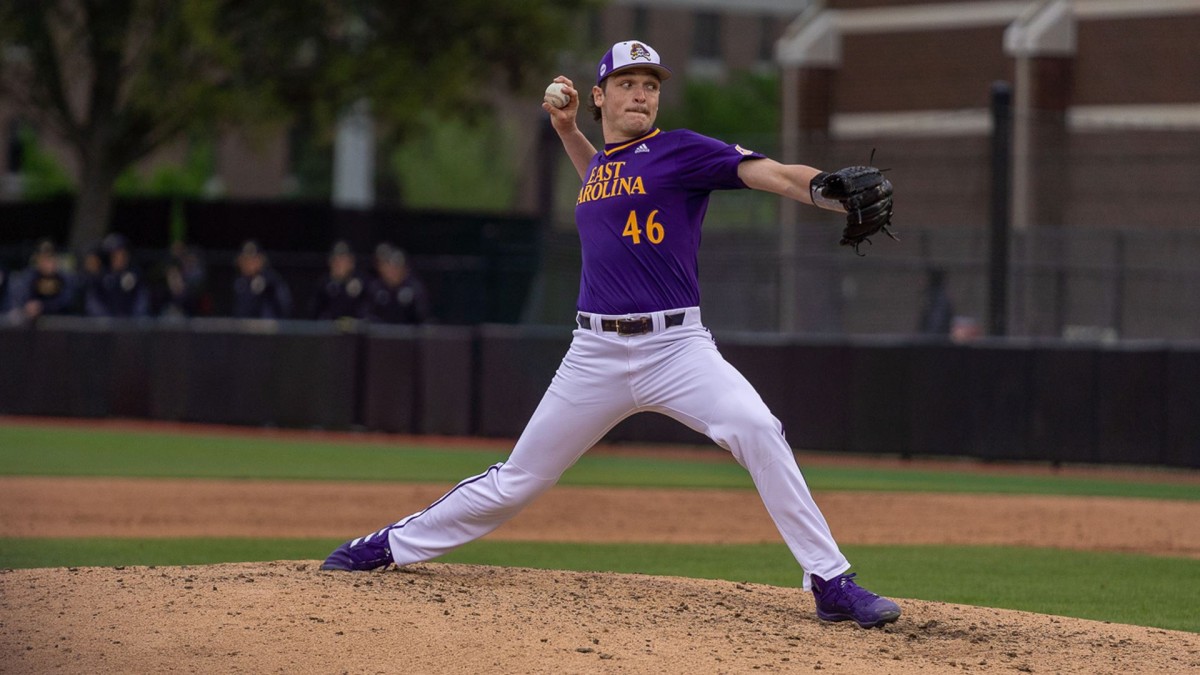 GREENVILLE, N.C.     East Carolina pounded out 12 hits getting three each from Zach Agnos, Jacob Jenkins-Cowart and Bryson Worrell in a 10-3 American Athletic Conference series-clinching win Saturday at Lewis Field inside Clark-LeClair Stadium. With the victory, the Pirates improved to 18-14 on the year and 4-1 in league play while the Shockers dropped to 12-18 and 1-4.

Leading 2-1 going to the bottom of the fourth, ECU plated a pair of runs extending its lead to 4-1. Worrell singled up the middle and Jenkins-Cowart put runners on the corners with a single to right field. CJ Boyd scored Worrell with a sac bunt and Carter Cunningham's RBI ground out to second pushed across Jenkins-Cowart for the would-be game winning run.

Carter Spivey (2-0) earned the win in relief allowing one run (earned) on two hits with a walk and two strikeouts in 2.1 innings. Starter Jake Kuchmaner gave up two runs (both earned) on six hits with a pair of walks and four punch outs in four-plus frames. Trey Yesavage worked two-thirds of an inning and Jake Hunter closed the game giving up one hit and striking out four in two frames.

For the second-straight game of the series, ECU jumped out to an early 2-0 lead scoring a pair of runs in the second inning. Jacob Starling reached with two outs when he was hit by a Tolle pitch. Alec Makarewicz singled up the middle and Worrell loaded the bases with an infield single to short. Jenkins-Cowart plated to Starling and Makarewicz on a base hit to right field before Worrell was thrown out at the plate to end the stanza.

Wichita State cut ECU's lead in half in the fourth inning making it a one-run ball game, 2-1. Couper Cornblum singled through the right side, just out of reach of a diving Starling, then stole second base to move into scoring position. Ross Cadena singled him home with a base hit to left field.

Sawyre Thornhill's RBI ground out to third pulled the Shockers within two, 4-2, in the fifth stanza. Chuck Ingram walked and moved over to third on Brock Rodden's double before crossing home on Thornhill's grounder.

ECU responded with a run in the home half of the fifth pushing its lead back to three, 5-2. With two away, Worrell reached on an infield single and scored on Jenkins-Cowart's RBI triple to right-center.

Wichita State scored a run in the seventh on Kocis sac fly, once again cutting the lead to two at 5-3. With the bases loaded, ECU went to the bull pen in Yesavage who allowed the RBI fly out to Kocis and the Shockers ran themselves out of the inning when Xavier Casserilla was caught trying to swipe second with Thornhill standing on third.

ECU would slam the door shut in the bottom of the seventh scoring five runs on two hits and capping the scoring at 10-3. Makarewicz, Worrell and Jenkins-Cowart loaded the bases after three consecutive walks by Stuempfig. Cam Clonch delivered a pinch-hit two-run double down the right field line, which was followed by another walk this time by Cunningham. Jenkins-Cowart scored on a wild pitch before Agnos registered his third hit of the contest plating two more runs.

To go along with their three hits, both Agnos and Jenkins-Cowart drove in three runs while Clonch added two. Worrell (three), Jenkins-Cowart (two) and Makarewicz (two) scored multiple times and the Pirates had six two-out RBI.